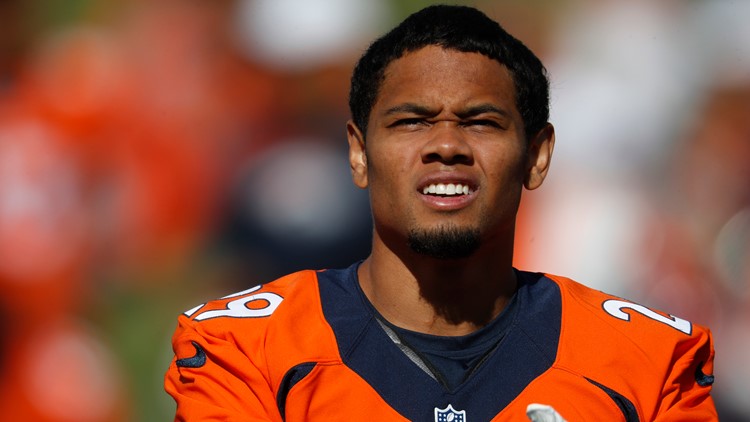 OAKLAND, Calif. — The Broncos are concerned enough with the health of Bryce Callahan that they’ve been calling agents of other available cornerbacks, sources tell 9News.

Nine months after surgery to repair a broken fifth metatarsal on his left foot and six months after the Broncos signed him to a three-year, $21 million contract as a free agent, Callahan was inactive for the season opener Monday night against Oakland.

"There’s a concern," Vic Fangio said after his Broncos head coaching debut ended in a 24-16 defeat to the Raiders.

Callahan’s replacement, second-year cornerback Isaac Yiadom, was picked on repeatedly by Raiders quarterback Derek Carr in the first half. Ugh.

Callahan is a good guy and a very good cornerback when healthy. He had two sacks and two interceptions in 13 games for the Chicago Bears and defensive coordinator Fangio last year.

But either Callahan’s surgery, or his recovery from surgery, has not gone as hoped. He seemed to be coming along until his foot was stepped on during the Broncos’ stadium practice on July 27.

He really hasn’t fully practiced since. While a team source said Callahan is not a candidate for injured reserve, he may not be ready to play against his former team when the Broncos play their home opener Sunday against the Chicago Bears.

Callahan worked out with strength and conditioning coach Loren Landow before the game Monday, but afterwards he said he was not allowed to talk about his injury.

Indeed, right tackle Ja’Wuan James said he was told not to discuss the knee injury that knocked him out of the game in the first quarter.

DaeSean stands up to drop

The Broncos had settled for a field goal with their goal-to-go chance in the second half, but they would have had a touchdown to finish their next drive had  DaeSean Hamilton caught a Joe Flacco pass in the end zone.

Flacco throws a high-velocity ball off a deceptively easy delivery and it appeared his pass got in on Hamilton’s shoulder pads before he could get his hands on it. Not that Hamilton was using an excuse.

"I was relaxed, beat my guy. Tried to catch it with my body. I don’t catch the ball in my body. Dropped it," Hamilton said. "Game-changer right there in my eyes. It would have changed the game."

"I’ve done some bonehead plays like that before," Hamilton said. "I just have to make that play. I can’t wait for Chicago. I need to do whatever it takes to get that bad taste out of my mouth."

Second-year receiver and special teamer Tim Patrick suffered a hand injury that appears to be serious. He left the visiting locker room with a heavy cast on his left hand and two small fingers.

One week after he was signed by the Broncos to a one-year, $805,000 contract, Corey Nelson started ahead of Alexander Johnson at the inside linebacker position next to Josey Jewell.

"Yeah, as best I could," Nelson said. "There’s a lot of things I can still learn. There were a few calls that I busted, that I could have been better at. I tried to do the best I could, given the circumstances."

Nelson had but one tackle. Still, it was commendable he could start and play on such short notice. He credits his daily dose of playbook studying.

"Almost a brain overload," Nelson said. "But that’s the way of the game."

"Without seeing the tape there were some plays he could have done better," Fangio said. "But kudos to him for coming in and being ready to play."

With a 20-yard reception to convert a third-and-3 in the third quarter, rookie tight end Noah Fant provided a glimpse of why he was the Broncos’ first-round draft pick. But he also had two penalties in the game – an illegal block in the back that brought back and a holding penalty that pushed back McManus to one yard out of his field goal range.

"I personally didn’t think it was holding, but they called it, so I got to be better and play better," Fant said. "It was good experience to get the first game under my belt. A lot of things to learn from. I’m just  excited to get to next week."

Jewell led the Broncos with 13 tackles. Yiadom was a distant second with eight tackles and safety Kareem Jackson, who seemed to be all over the field, had seven tackles and two pass breakups …

The Broncos only had about $5 million in cap space, by their accounting, before they restructured Joe Flacco's salary. Now they have about $18 million in cap room in case they decide later to extend one of their fine players from their 2016 draft class like Justin Simmons, Adam Gotsis, Andy Janovich, Connor McGovern or Will Parks. ...

Colby Wadman had a nice game punting the ball, highlighted by his 62-yard, flip-the-field punt after the Broncos’ first possession. He also dropped two others inside the 20.