Down 7 points with 2:10 remaining, Lock and Bridgewater moved their respective units down the field but both drives were killed with interceptions. 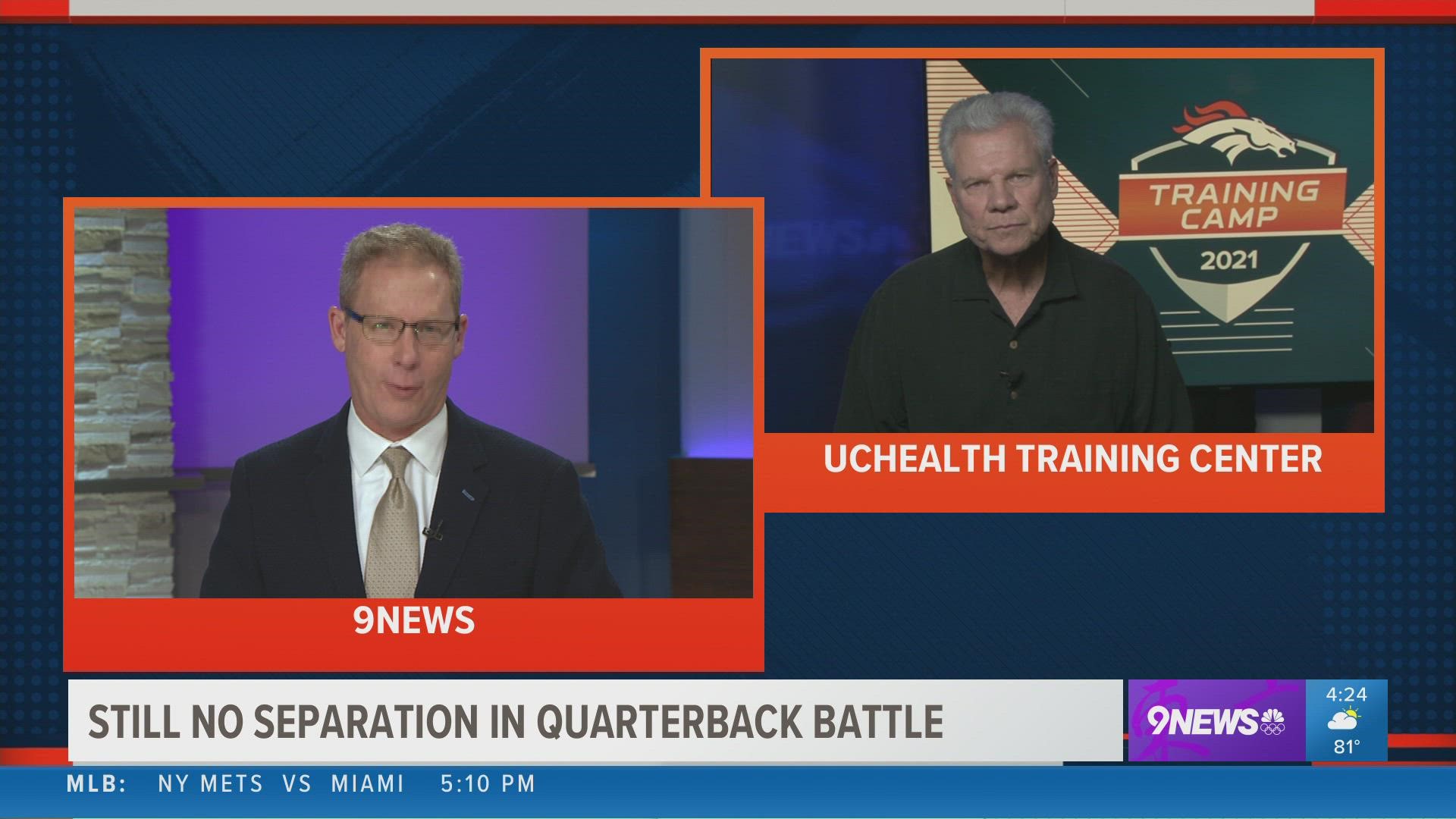 ENGLEWOOD, Colo. — Vic Fangio has repeatedly said there is no separation in the Broncos’ quarterback competition between Drew Lock and Teddy Bridgewater.

What about what the head coach says, Teddy Bridgewater?

Welp. That’s not how Day 7 of training camp ended on a brilliant early-summer Wednesday morning before a berm gathering of 1,371 at UCHealth Training Center. The situation programmed had the Broncos down 7 points with 2:10 remaining. The offense had the ball at its own 25 with two timeouts plus the 2-minute warning.

Lock efficiently moved the first-team offense down the field, got deep into in the No. 1 defense’s red zone, scrambled right and threw into the end zone...where safety Justin Simmons made a forward-falling interception. Ugh.

Next it was Bridgewater’s turn with the No. 2 offense. He moved his team down the field until the ball was snapped just outside the No. 2 defense’s red zone. Bridgewater lofted a fade pattern that was badly underthrown to receiver Branden Mack, or so it appeared. Newly signed cornerback Rojesterman Farris stepped up and made his second practice-ending interception in three days. Double-ugh.

“Defense came with the pressure, we had to get the ball out quick, and we weren’t on the same page,’’ Bridgewater said of the miscommunication between him and Mack. “Something we can fix easily and it’s nothing that we’re going to panic about.’’

On a day when the QB competition started with a tie, it finished with a pick-pick deadlock.

It’s difficult to determine whether the quarterback operating the No. 1 offense has the advantage over the QB huddling up the No. 2 defense. It’s really more about which defense the offense is going against as the starters have all the high-priced stars.

“I think I might have to start watching Justin Simmons tape on my free time,’’ Lock said. “Make sure something like that doesn’t happen again.

“It’s a good defense we’re going against every day, if you are going against the (1s) and same with the 2s. Vic’s got them rolling and they’re tough to play against. It’s fun, though. You know they’re going to throw crazy looks at you most of the time. The things you see out here are way more crazy than what you see on Sundays.”

This is Lock’s first QB competition – he had always been the guy at Missouri, was settled into a backup role as a Broncos rookie behind Joe Flacco in 2019, then had no sweat for the starting job last year. He said there are challenges within the competition itself besides the Denver D. Expectations for a run period are different than a pass period. Sometimes a QB runs the No. 2 offense with rookie center Quinn Meinerz, only for the next team period switch to the No. 1 offense with second-year center Lloyd Cushenberry III.

“That’s part of the quarterback battle, that’s part of the test,’’ Lock said. “There’s a lot that goes into it and that’s what makes it fun. Can’t ever come out here relaxed. You have to be on your toes, you have to be ready for whatever. 'Hey, Vic’s going to cut this, right here. He’s going to count it as a penalty. You guys are going to move back 10 yards, OK, here we go. First and 20, third and 18.' You just have to adapt. Got to figure it out.

“It makes it fun, it makes it difficult, it makes it hard. But that’s what you need. I feel like if it’s easy than you’re not going to learn much. But when it gets difficult that’s when you really learn and see what you’re made of.”

9NEWS has the QB competition scorecard at 3 practices for Lock, 3 practices for Bridgewater, and Day 7 was a tie. No one wins when both quarterbacks end their final 2-minute drives with interceptions.