Returning on a pay cut at 33 years old, Jackson had two interceptions Saturday. 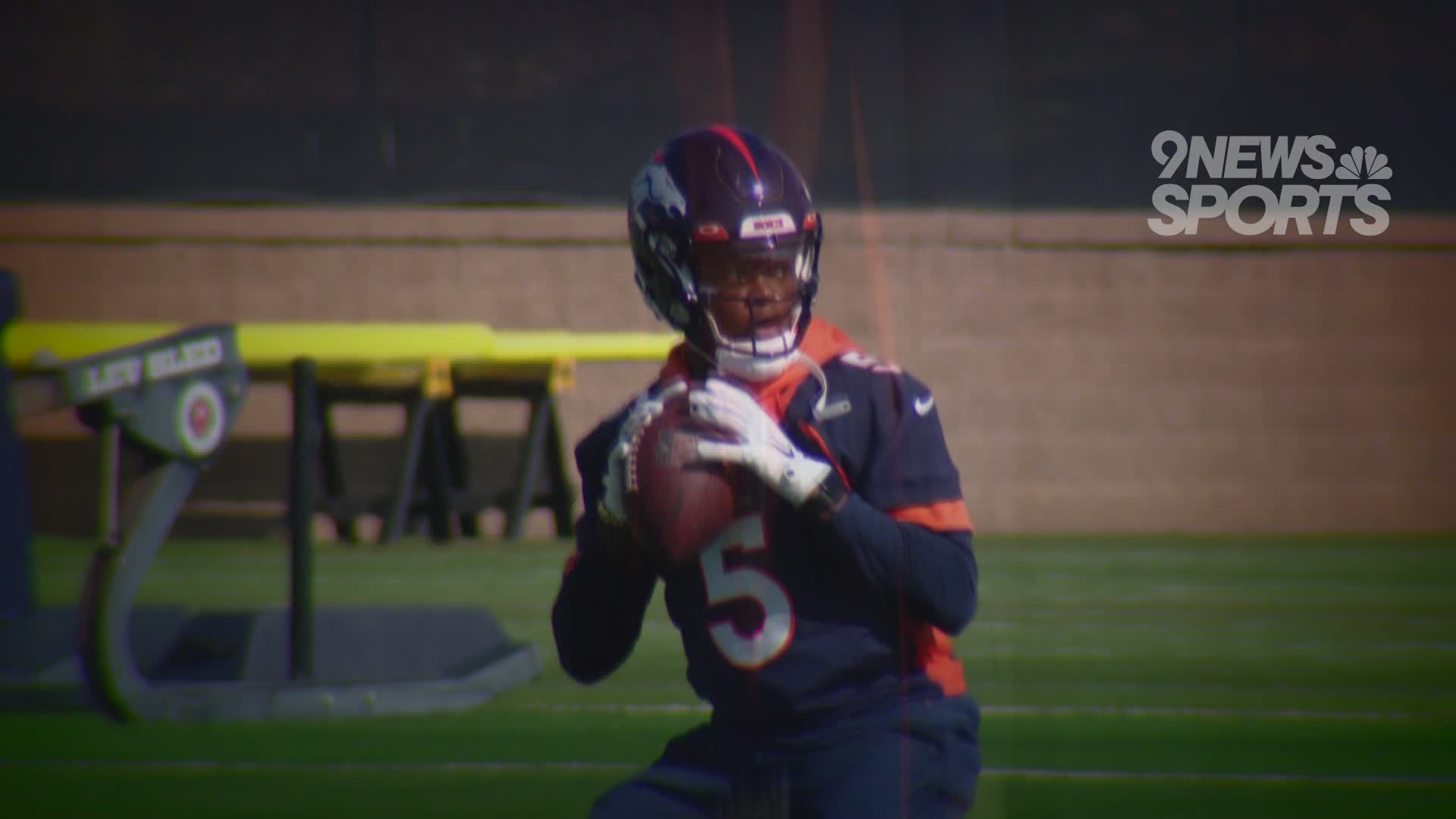 ENGLEWOOD, Colo. — Among the teams Kareem Jackson wants to show this season is the Broncos.

It's the team he plays for. Don’t be confused. He’ll continue to sacrifice his physical well-being for the Broncos on Sunday afternoons, when the 12th-year NFL safety launches his sinewy, 183-pound body that hits like a truck toward opposing Chiefs, Chargers and Raiders.

Those AFC West rivals, though, only try to beat him. The Broncos cut Jackson, then brought him back on a pay cut.

“I’ve always been, I can show you better than I can say it,’’ Jackson said in a sit-down interview Saturday with 9News. “So for me, it’s about proving them wrong. I’m always going to come out with a chip on my shoulder. That added fuel to the fire under the circumstances and the way things went throughout that process. It’s definitely about coming out and showing them.”

Jackson had a "I showed you" practice on Saturday, when he came up with two interceptions against quarterback Teddy Bridgewater before the largest berm gathering to date at Broncos’ training camp.

It wasn’t anyone’s fault that Jackson had little choice but to accept a salary cut from his originally scheduled $10 million this year to $5 million. He can’t be blamed for turning 33 while playing a space position at a time when the free-agent players’ market became virus-depressed for so many.

And it wasn’t the Broncos’ fault that COVID-19 happened. If the Green Bay Packers, the NFL’s only publicly owned franchise, suffered $38.8 million in operating losses last season, then it figures the Broncos took a similar financial hit.

After nine consecutive years of NFL payroll gains, the salary cap for each team was reduced this year, by 8 percent. The Broncos had to cut somewhere, especially when they also had to budget big money to bring back Von Miller, Justin Simmons and Shelby Harris.

When it comes to his teammates, Jackson is a class act. A couple years ago, when cornerback Chris Harris Jr. held out from offseason team activities until he got $50 more than Jackson – and wound up getting it thanks to the good work of his then-agent Frederick Lyles – Jackson never said a word.

To each their own in the business of football, and Jackson is happy for all his teammates who have padded their financial portfolios, especially his safety mate Simmons, who is now the NFL’s highest-paid safety at $15.25 million per year.

When Jackson first signed with the Broncos prior to the 2019 season, he was still in the early stages of the transition between cornerback and safety. He played outside, shutdown corner, then the slot, then started mixing in some safety near the end of his 10-year stay with the Houston Texans. He played the slot a few games for the Broncos before moving permanently to the safety position next to Simmons.

“I think it’s benefitted me a lot these last couple years, I’ve been able to lock in on that and prepare and see things from a safety’s perspective,’’ Jackson said.

The biggest adjustment in going from corner to safety?

Jackson and Simmons cover the back end of a secondary that is pleasantly crowded with four elite cornerbacks. Ronald Darby and Kyle Fuller were signed, at a combined $19.5 million in 2021 dollars, from free agency, Pat Surtain II was selected with the No. 9 overall draft pick, and Bryce Callahan, a premium free agent two years ago, is back on the final year of his deal.

“I think it’s a luxury to have that many corners, or guys that can play elite ball,’’ Jackson said. “Every team doesn’t have that luxury. To have four guys that can play down after down, and compete with the best of them is definitely a luxury for us. I’m looking forward to seeing how it shakes out. I’m looking forward to seeing who will be out there. I’m sure at some point, all four guys will be on the field a lot. We’ll all be out there a lot together with all the different packages we have. Right now, I’m just excited to see those guys work on a day-to-day basis.’’

There was a time, not long ago, when Broncos management was asked why the team didn’t have any players from Alabama, the mighty college program that competes for the national championship every year. Now the Broncos have three prominent Crimson Tide products in Jackson, receiver Jeudy and the rookie Surtain. All entered the league as first-round draft picks.

“Coming out of Alabama, if you’re in the front office I think you know what you’re going to get,’’ Jackson said. “I think you know you’re going to get some tough guys that’s already prepared to step in and play. Guys that understand football in every aspect at every level. I mean guys that competed at the highest level and probably won a national championship. And probably a guy who has some indication of what it’s like to be a guy at the next level. Why not? It’s only the greatest school in the world.”

And so Jackson is always Bama-raised and still a Bronco. He returned a little lighter in the wallet because he loves the teammates he leads, because he likes the coaching staff and fits Vic Fangio’s defensive system, and because he believes the Broncos will return to their winning ways this year.

“I think with our veteran leadership and knowing the talent we have on both sides of the ball I think that’s a huge reason why we’ll be good,’’ Jackson said. “I think more so than anything I think we have a group of guys that we all have the same goals in common and we all want to be good. On paper that’s one thing. But if you’ve got a group of guys that want to be good and want to come out and compete on a consistent basis and do things the right way I think that’s a good recipe to be a great team.”

RELATED: Bronco notes: Day 4 of camp was not Bridgewater's day