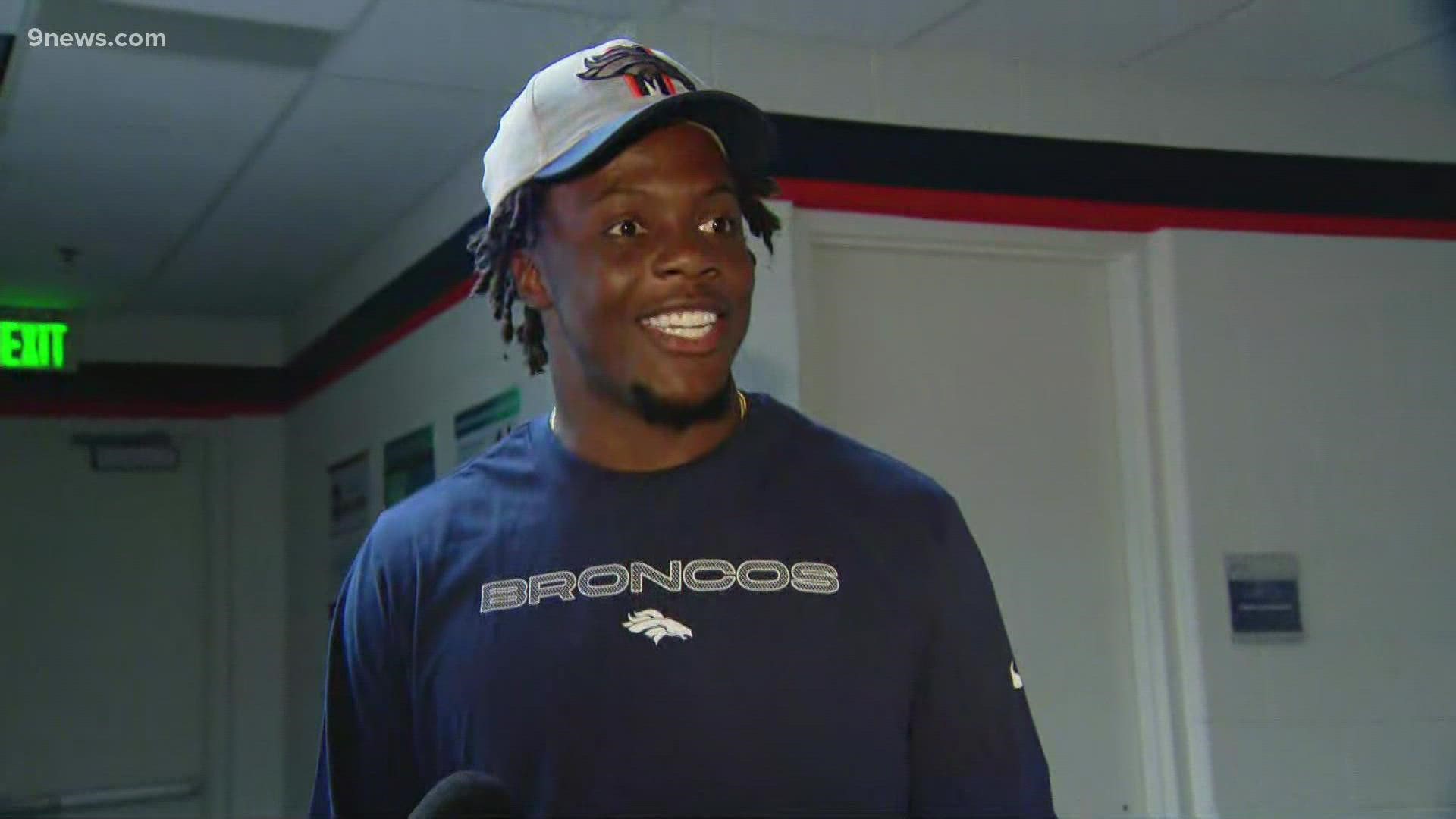 DENVER — Through the first quarter, it appeared the Broncos’ starters weren’t quite with it.

Teddy Bridgewater and his receivers were misfiring or muffing, as the Broncos’ newly anointed No. 1 quarterback was off to a backup-like, 1-of-6-for-4-yard start.

"He was high with his throws,'' said Broncos' head coach Vic Fangio. "At the start of the game we ran it good but we weren't throwing it good."

"I wasn't at the time, but I'm glad they faced some adversity,'' Fangio said. "I'm interested to see that (second) 11-play drive on us, I think we were getting a little tired. Maybe our fatigue police has been doing a little too much policing. And we need to get these guys in better shape.''

The Broncos, who played their starters for 1 1/2 quarters, defeated the Rams, 17-12, in the preseason finale played on a warm (84 degrees at kickoff) late-August Saturday night before 52,478 at Empower Field at Mile High. The game ended with Perkins throwing an incomplete pass into the end zone from the Broncos' 27.

The Broncos finished their preseason with a 3-0 record, although none of their opponents -- the Vikings, Seahawks and Rams -- played more than one or two starters.

Surprisingly, the Rams backups were up, 6-3 early in the second quarter and it could have been worse as Los Angeles had 7 first downs to Denver’s 2.

Bridgewater would get one more chance to justify head coach Vic Fangio’s decision to choose him over Drew Lock. And Teddy Two Gloves delivered. Bridgewater completed 5 of 5 for 58 yards in his third drive, which was capped by an 8-yard touchdown strike to receiver Courtland Sutton that put Denver ahead, 10-6 in the second quarter.

Bridgewater and Sutton also connected for a 19-yard completion on the drive, an encouraging return to play by the receiver who had been out since tearing an ACL in game 2 last season at Pittsburgh.

"It was nice to be out there with the guys and be able to do it in front of Broncos Country,'' Sutton said. "It was amazing to be able to see all the fans out there, hearing them cheering for us. It gets you hyped for the regular season.''

"It was just off a little bit tonight,'' Bridgewater said. "It was one of those deals where as a quarterback I know I have Court out here for the first time, Big O, let me get these guys going. And if I had just played within our system, throw the ball to the guy that's open, you have success as a quarterback.

"It's one of those deals where I'm just learning. If they call Court's number and they're covered, hey, get to the next guy in the read."

Besides Sutton, who played just one half of football last year, star pass rusher Von Miller returned for his first game action since 2019. Miller tore an Achilles tendon six days prior to the season-opener last year and missed the entire season.

He had three tackles and a quarterback hurry during a fairly active three series of work.

"When you're in rehab all you think about is, 'Man, can't wait to play football, can't wait to play football,''' Miller said. "Then when you get out there you really don't think about it. It's about the next play. You don't really reflect on rehab and stuff but I did kind of look up and take in the type of environment we have here in Broncos Country. We had 53,000 fans here. Last year, we didn't have any (because of COVID-19 restrictions). It just felt really, really good to be back in the stadium with all the guys. It was a great day."

Perkins led the Rams on his first drive of the second half, but the Denver defense, which didn't allow a touchdown in the preseason, stiffened in the red zone. A fourth field goal by Matt Gay gave Los Angeles a 12-10 lead midway through the third quarter.

Bridgewater finished his preseason by completing 22 of 30 passes for 241 yards, three touchdowns and no interceptions. His next game will be the season-opener Sept. 12 against the New York Giants at MetLife Stadium in East Rutherford, N.J.

Lock was 19 of 28 for 298 yards, 3 touchdowns and no interceptions and a 138.7 rating. Not bad for someone who lost the QB competition. Make no mistake, Lock is not done.

Brandon McManus continued his strong kicking as he nailed a 54-yard field goal to finish off the Broncos’ first drive. He was 5 of 5 in field goals, with makes from 52 and 54 yards, and 8 of 8 in 33-yard extra points, this preseason.

The Rams got a third field goal from Matt Gay late in the first half when defensive lineman Michael Hoecht beat right tackle Cam Fleming on a stunt and stripped-sack Lock. Hoecht recovered the fumble inside the Broncos' 20, setting up Gay's short field goal on the final play of the half.

For many players, the game would mark the last time on the Broncos' active roster. The team must cut its roster from 80 players to 53 by 2 p.m. Tuesday.

"I don't know what our final list is going to look like, yet,'' Fangio said. "George (Paton, the Broncos' general manager) and I have talked about it but (Sunday) will be the real talk.''

The regular season is next on the schedule. The Broncos open against the New York Giants, who were 6-10 last year, at MetLife Stadium in New Jersey on Sept. 12, a weekend that will mark the 20th anniversary of 9-11.

RELATED: 5 goals for Broncos in preseason game vs. Rams