Denver was dominant in its home opener in front of 71,985 fans at Empower Field at Mile High. 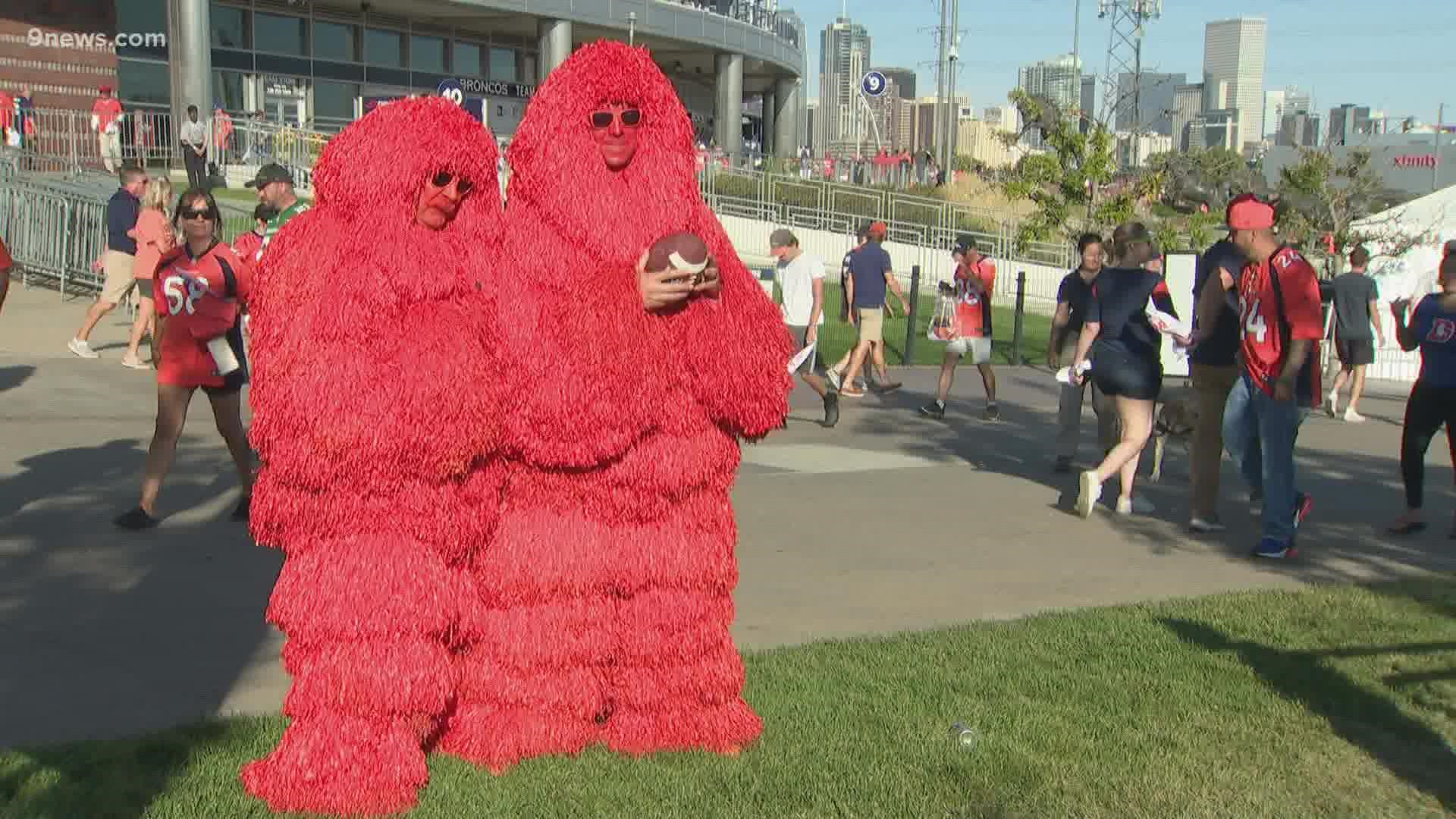 DENVER — Sure, the Broncos owe the NFL schedule makers a nice dinner for its ridiculously easy early set of games.

The Broncos’ early dominance, though, offsets all qualifiers.

The Broncos thumped the New York Jets, 26-0 Sunday beneath a hot, bright sunshine in the late-September home opener before 71,985 at Empower Field at Mile High.

"Man, how about that fan base out there today,'' said Broncos' quarterback Teddy Bridgewater, easily the most surprise of the team's 3-0 start. "It was loud out there. I experienced it on the other side (with the Vikings) a couple years ago so it was great to be part of the winning side.''

It was the first full capacity (except for the 3,897 no-shows) since the 2019 season as the COVID pandemic, if not the virus strand, has essentially ceased to halt the world of sports. Included in the gathering was Larry Walker, the former Rockies' outfielder great whose Hall of Fame/No. 33 retired number weekend continued at the Broncos' game where he was recognized to a thunderous ovation by the crowd.

The Broncos could have won by more but with less than 4 minutes remaining, rookie running back Javonte Williams fumbled away a first-and-goal from 1 opportunity.

The Broncos are 3-0 with decisive road wins against the New York Giants and Jacksonville Jaguars, and then the Jets. Those three opponents have a combined 0-9 record. Then again, the Broncos defeated those three cellar dwellers by a combined, 76-26 -- a 50-point margin.

So bring on the Ravens.

1 / 19
AP
Denver Broncos fans cheer during the first half of an NFL football game against the New York Jets, Sunday, Sept. 26, 2021, in Denver. (AP Photo/David Zalubowski)

The Broncos almost predictability went up 10-0 by early in the second quarter. Predictable because Jets’ rookie quarterback Zach Wilson appeared overmatched against the Denver D. In two possessions, the Jets had 6 net yards on 7 plays.

Teddy Bridgewater, meanwhile, led the Broncos on two scoring drives. The first took 7 minutes and 10 seconds and ended with Williams scoring on a 1-yard sweep right for his first NFL touchdown. The second ended with a 45-yard field goal by Brandon McManus early in the second quarter.

Bridgewater was again superb in his third start for the Broncos as he completed 19 of 25 for 235 yards and a 104.6 rating. He has posted a 100-plus rating in all three games this year. The veteran Bridgewater decisively outplayed the top two picks in the NFL Draft, Jacksonville's Trevor Lawrence and Wilson, in back-to-back weeks.

Credit: AP
Denver Broncos outside linebacker Von Miller (58) against the New York Jets during the first half of an NFL football game, Sunday, Sept. 26, 2021, in Denver. (AP Photo/Jack Dempsey)

"Teams are blitzing our run game, which is why we've had success in the passing game,'' said Broncos head coach Vic Fangio. "They're going to major extremes to play our run game our first three opponents."

Bridgewater was asked if that means teams are daring Bridgewater to beat them with the pass.

"If that's what it means, we'll take it,'' Bridgewater said. "As you saw today just give those guys (his receivers) a chance and they make plays. If teams want to sell out and stop the run then we're going to ask our receivers and tight ends and running backs to do a great job of helping us get the pass game going.

"We understand each week teams are going to play us different and we try to come up with a plan that helps us play at our best. And as long as guys approach each day with that student mindset and are eager to learn more and we demand more of each other, we can keep this thing going.''

Wilson started gaining confidence on short, middle passes during his third possession. He completed six passes on the drive and had at least one huge drop in the open field, and maybe two. The Jets would have had a 56-yard field goal by Matt Ammendola to finish the drive but a delay of game penalty pushed them back to a 61-yarder. At that point, Jets’ coach Robert Saleh opted to punt.

He should have given Ammendola a shot. The Denver D pitched its first shutout since blanking Tennessee, 16-0, in 2019.

Wilson is not ready to play quarterback in the NFL. He was 19 for 35 but for only 161 yards with two interceptions and an abysmal 42.6 rating.

“It's frustrating. It's just a lack of execution,'' Wilson said. "Once again I just say, we're all learning. We're trying to get better every single week. It’s maybe hard for people to see that, but we're learning a lot in those games. People are going to hate, and it is what it is, but we're just going to keep that confidence.''

Tim Patrick led the Broncos and all receivers with five catches for 98 yards. Melvin Gordon III had 61 yards rushing and a touchdown off 18 carries while Williams had 29 yards and a touchdown, but also lost a fumble on 12 carries.

"The fumble was a downfall for me but I've just got to bounce back and have better ball security,'' Williams said.

Alexander Johnson had two of the Broncos' five sacks on Wilson with Von Miller, Malik Reed and Shelby Harris also getting one for the Denver D. Johnson also nearly had an interception and tied with rookie cornerback Pat Surtain II with a team-most 5 tackles.

"On my sacks, it was teamwork,'' Johnson said. "The (defensive) ends came for the quarterback when I was coming in the middle. (He then laughed at Von Miller, who was teasing him from the side of the podium). And I had one-on-one with the running back. But it's amazing we were able to dial 'em up and get those sacks.''

Justin Simmons got his first interception of the season. He nearly brought it back for a pick six before settling for a 35-yard return. For the first time in 51 games, Simmons missed a snap. Fangio took him out from the final four-play Jets series with the Broncos up comfortably.

Simmons had played in 3,377 consecutive defensive plays before he rested at the end.

That gave rookie safety Caden Sterns and opportunity to nab his first NFL interception with a 44-yard return in the final seconds.

Late in the first half, the Broncos lost speedy slot receiver KJ Hamler to what appeared to be a serious left knee injury. He was running a deep out and the ball arrived a tad high and a bit late. Hamler went up with another Jets’ defender. The ball fell incomplete and Hamler went down clutching his left knee.

Hamler will undergo an MRI exam Monday morning to determine the nature of his injury but the way he was helped off the field, it appears he will miss multiple games. There is hope for the best-case scenario which is a sprain and he misses a couple games. But MRI exams always tell the full story.

After Hamler went to the locker room, the drive continued as Bridgewater scrambled 13 yards to convert a third down and then connected with Patrick on a sideline and go for 27 yards. The Broncos were in the Jets’ red zone with less than 2 minutes remaining.

On third down, Courtland Sutton drew a 19-yard pass interference penalty that set up first and goal from the 1. This time Gordon scored to give the Broncos a comfortable, 17-0 lead into the intermission.

To start the second half, the Denver D came through with another three-and-out series while Bridgewater answered with another sustained, field goal drive. McManus connected from 47 to put the Broncos up 20-0. McManus later added field goals of 21 and 36 yards and is 9 of 9 in field goals this year and 7 of 7 in extra points.

Early in the second half, the Broncos lost their two starting guards. Right guard Graham Glasgow, back after missing last week's game at Jacksonville because of a heartbeat irregularity, had his foot accidentally stepped on by teammate right tackle Bobby Massie and suffered a knee injury. Left guard Dalton Risner left with a foot injury.

So for the final 1 1/2 quarters, the Broncos played with rookie Quinn "The Belly" Meinerz at left guard and second-year player Netane Muti at right guard.

The Broncos had already lost starters Jerry Jeudy, Ronald Darby, Bradley Chubb and Josey Jewell for various extended periods because of injuries. Darby believes he'll be ready to go in game 5 at Pittsburgh, although the following week, game 6 at home against the Raiders may be more realistic.

The Broncos host the 2-1 Baltimore Ravens and star quarterback Lamar Jackson next Sunday at Empower Field.

“I enjoy that we won these three games, but by the time I get home tonight I'm going to start working on the Ravens,'' Fangio said. "We're going to have to figure out a way to run the ball against these loaded boxes or we just have to keep throwing it. That would be the one thing these first three teams definitely didn't want us to get started—running the ball. All three of them had various degrees of success doing that.”

RELATED: Here's what you need to know before Sunday's Broncos game