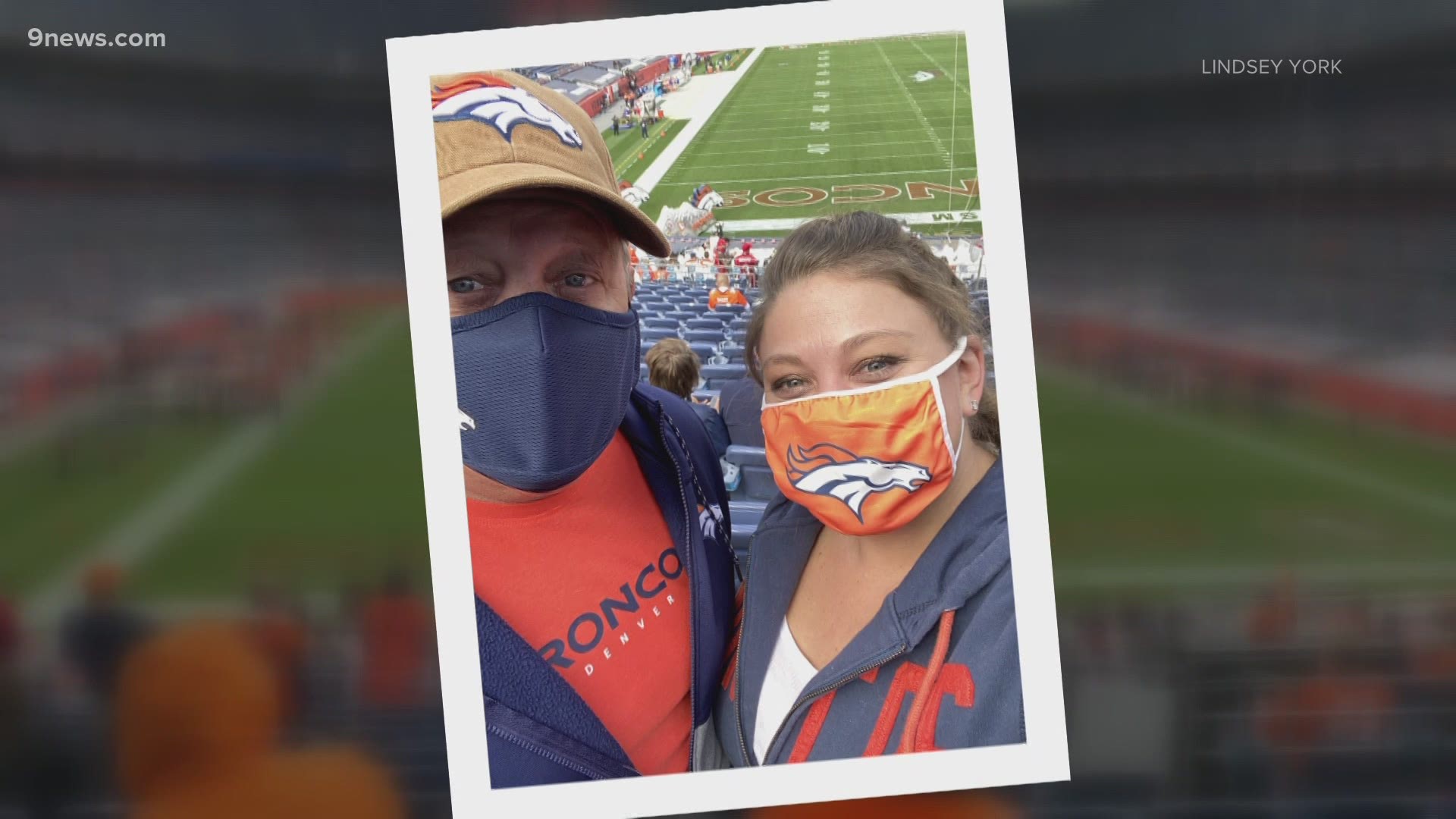 DENVER — Only coronavirus restrictions prevented Empower Field at Mile High from emptying through a discouraged mass fan exodus her Sunday.

The place was empty all right, but only because Governor Jared Polis would only allow 5,700 fans to attend the game between the Tampa Bay Buccaneers and the Broncos. The Gov spared another 70,000-plus from witnessing a mostly uncompetitive performance, especially from the Broncos' offense.

It looked like a mismatch as Tom Brady – already the most accomplished quarterback in NFL history -- led his Bucs past the Broncos, 28-10 on a cool, cloudy, late-September Sunday afternoon.

“There’s no excuses. We’re not in the business of excuses, we’re in the business of execution and making plays and we haven’t been doing that,'' said Broncos' defensive end Shelby Harris, who in defeat had two sacks and a deflected pass against Brady. "We’ve got to sit down and be honest with ourselves. I think the best thing coming off this 0-3 start is that we have a short week. You’ve got to forget about it. You just have to go out there and play football.''

The Bucs are 2-1. The Broncos are 0-3. They play at the 0-3 New York Jets in what could be called the Thursday Night Toilet Bowl. Somehow, the Broncos are a favorite in the game even though they may have another quarterback change.

The Broncos finished the game with their third quarterback in three games. Jeff Driskel, who started in place of the injured Drew Lock, led a late, second-half scoring drive with a 27-yard completion to Tim Patrick to convert a third-and-20. Driskel finished off his drive with a 7-yard touchdown to Patrick. Leaving the Broncos, 23-10 at halftime.

Any hope of Broncos' carrying momentum into the second half, was quelled when Tampa Bay edge rusher Shaq Barrett sacked Driskel in the end zone for a safety. Barrett was the former Broncos' backup edge rusher who led the NFL with 19.5 sacks in his first season with Tampa Bay last year.

He got his first two sacks of the season against his former team.

Driskel was pulled after taking his fifth sack early in the fourth quarter. Brett Rypien, who was on the Broncos' practice squad most of last year and through the first two weeks this season, came off the bench and played well.

“I just wanted to get a new guy in there,'' Fangio said. "See if he can get it out of his hand a little quicker, direct the protections and see if he could provide a little spark there.”

Rypien started by completing his first 8 passes to lead the Broncos from their own 27 to the Tampa Bay red zone. His ninth pass, though, on fourth and 1 from the Tampa Bay 13, was intercepted in the end zone by safety Mike Edwards.

“I kind of saw from the pictures that they were bringing a lot of different pressures, so my mentality was to try and get it out as quickly as possible to open guys,'' Rypien said. "I thought the drive went pretty well. It was nice to get going in the two-minute offense there. I just wish we could have finished the drive a little better.”

Before that sparse but sold out crowd of 5,700, the Broncos got off to a brutal start. For the second straight game, their punt team failed them. After the opening series, the Broncos’ Sam Martin had his punt blocked by defensive lineman Patrick O’Connor, who shot up the middle.

Tom Brady’s first drive started at the Broncos’ 10, first and goal. Three plays later, he found receiver Chris Godwin underneath, who slithered and extended his way for a 10-yard touchdown reception.

Late in the first quarter, Brady dunked and dinked his way down field until Ryan Succop kicked a 43-yard field goal and Tampa Bay was up, 10-0.

Early in the second quarter, Driskel put together a decent drive with a 15-yard completion to rookie receiver Jerry Jeudy and roll right, throw-back left pass to tight end Noah Fant for 18 yards.

That was enough to get in long field goal range for Brandon McManus, who drilled a 56-yard boot through the uprights with plenty to spare.

RELATED: The entire town of South Park – the cartoon version – was at Sunday's Broncos game

The Broncos were down 10-3. At that point, Brady stopped dunkin’ and dinkin.’ With the Broncos generating little pass rush, Brady started throwing deep, hitting Scotty Miller, who got behind safety Justin Simmons for 47 yards. He capped the drive with an unusual 1-yard screen pass to Mike Evans who muscled across the goal line for a touchdown and a 17-3 lead.

Following another three-and-out by the Broncos’ offense, Brady drilled a 33-yard completion down the right sideline to tight end O.J. Howard, who shook off tight coverage from inside linebacker Josey Jewell. Howard and the Bucs’ other right end, Rob Gronkowski, combined for six catches and 69 yards in the first half. That drive ended with another 1-yard scoring pass from Brady to Evans. A blocked extra point kept Tampa Bay’s lead at 23-3.

“There’s been people talking garbage about (Brady) since I started playing with him 10 years ago – saying he didn’t have anything left in the tank,'' Gronkowski said. "That’s just simply not true. Just the way he can air the ball out and put a dime where he needs to.''

Brady was 25 of 38 for 297 yards with touchdown passes of 10, 1 and 1 yards. Driskel was 17 of 30 for 172 yards with a touchdown and interception when he was pulled in favor of Rypien with 10 minutes left in the fourth quarter. Driskel was sacked 5 times.

“It's something that we've got to shore up, starting on my end with communication on some of those, getting the ball off and throwing some away,'' Driskel said. "Protection is a team issue and the communication has to be better, and the quarterback has to be the one doing that.”

There's an outside chance Lock can return from the rotator cuff strain in his right throwing shoulder in week 5 at New England, although Game 7 against the Kansas City Chiefs may be a more realistic return date. Until then, Fangio has to decide between Driskel -- who has talent but struggles to get rid of the ball quickly; Rypien, who has moxie and good instincts but isn't very big and doesn't have the strongest arm; or newly signed Blake Bortles, who may not have enough time to learn the offensive playbook by the game Thursday.

If either Rypien or Bortles get the nod against the Jets, he would be the 9th different starting quarterback for general manager John Elway since Peyton Manning retired after the Broncos' Super Bowl 50 season of 2015. Already the 8 starting quarterbacks since Manning -- Trevor Siemian, Paxton Lynch, Brock Osweiler, Case Keenum, Joe Flacco, Brandon Allen and Drew Lock -- are the most in the league in that span.

Speaking of Manning he visited with Brady before the game.

“It was good to see him,'' said Brady, who improved to 9-9 overall against the Broncos -- which means he doesn't have a losing record against any NFL team in his 21-year career. "He’s familiar with a lot of guys that we have on our staff. I’ve known Peyton for a long time – almost 20 years. It was great to see him and his kids, and I just love seeing him. It was expected, but great for me to be able to see him and his kids.”

RELATED: Fangio gets it: Broncos coach to wear protective shield during game vs. Bucs