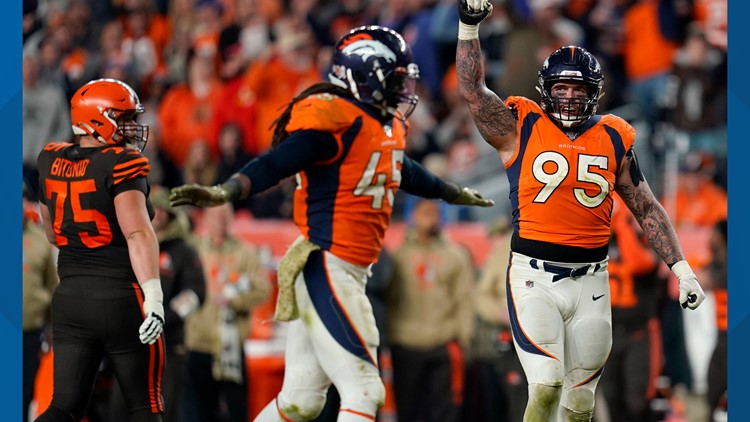 Photo by: AP
Denver Broncos defensive end Derek Wolfe (95) and linebacker A.J. Johnson (45) celebrate a defensive stop during the second half of an NFL football game against the Cleveland Browns, Sunday, Nov. 3, 2019, in Denver. The Broncos won 24-19. (AP Photo/Jack Dempsey)

DENVER — As an elite athlete is a want, Broncos defensive lineman Derek Wolfe was devastated by his probable season-ending elbow injury on Sunday night, but had already shifted to a far more positive mindset by noon Monday.

Even after an MRI exam Monday morning confirmed fears reported by 9NEWS on Sunday night that Wolfe suffered a dislocated elbow and is done for the year.

Athletes that reach the top of their sport simply don’t get there without a perpetual dose of optimism.

“It’s a typical dislocation,’’ Wolfe said in a phone interview with 9NEWS. “Similar to Jano’s. It’s a six-to-eight-week injury. No surgery. I should get all my range of motion back and everything. They told me it could have been a lot worse.”

He referred to fullback Andy Janovich, who suffered a dislocated right elbow while playing on the Minnesota Vikings’ artificial surface two weeks ago. Janovich was placed on season-ending injured reserve but no surgery was required.

Wolfe was hurt on a fourth-and-1 pitch play with 2:22 remaining in the Broncos’ game Sunday against the Los Angeles Chargers that turned out to be no play because of a false-start penalty. Thinking the play live, as all players did, Wolfe pursued ball carrier Austin Ekler and was reaching back when his left elbow got caught up beneath another pursuer, 330-pound, defensive line teammate Mike Purcell.

The refs were clearly tardy in not halting the play because of the false start.

“Should have never happened,’’ Wolfe said.

He went down in agony as the Broncos’ medical team rushed out and tried to pop his dislocated elbow back into its socket.

“Oh, it was miserable,’’ Wolfe said. “They tried to get it back in on the field and it wouldn’t go back in so they had to do it inside.”

He downplayed the fact the elbow injury could affect his impending free agency. He is finishing up his second, four-year contract with the Broncos that will have paid him $9.425 million this year.

“It shouldn’t affect free agency,’’ he said. “I should be good to go in January. If we were going to the playoffs, I’d be back for the playoffs.’’

Wolfe is one of John Elway’s best-ever draft choices, as he was taken in the second round of the 2012 draft and has so far played his entire eight-season career with the Broncos. Many Broncos fans hope he will get a couple more here.

Wolfe will be 30-years-old in a few months and next year will be his ninth season. But in another sense, he is just getting started. Wolfe’s 7.0 sacks in 12 games this year mark the best single-season total of his career. He doesn’t think it’s a coincidence that his best statistical season – sacks aside, it’s difficult to top Wolfe’s dominant overall play during the Broncos’ Super Bowl 50 run in 2015 – came in as head coach Vic Fangio’s first with the Broncos.

“I think his system has a lot to do with it,’’ Wolfe said. “He puts you in position to go make a play. It’s a lot like how Wade (Phillips, the Broncos’ defensive coordinator in 2015-16) was. Wade knew how to use his players, knew where to put you, and make the right call at the right time.

“Winning your one-on-one is big. It’s not just creating plays for other people. Multiple people have a chance to make a play. It’s whichever one gets their first. I’ve said from the beginning I felt like I was made for this defense.”

Fangio was asked what is it about his system that helped Wolfe make far more plays in the backfield this season.

“I don’t know. But there have been guys, interior defensive linemen over the years in this system that have had better years than they previously had.”

With Wolfe going on season-ending injured reserve, his playing time along the defensive line figures to be split up between rookie Dre’Mont Jones, whose play has earned more snaps, and veterans Adam Gotsis and DeMarcus Walker.