Lock: "I understand. This is a competition and I need to try and re-earn that spot. That’s my goal every single day. ... I think I can end up getting the job done." 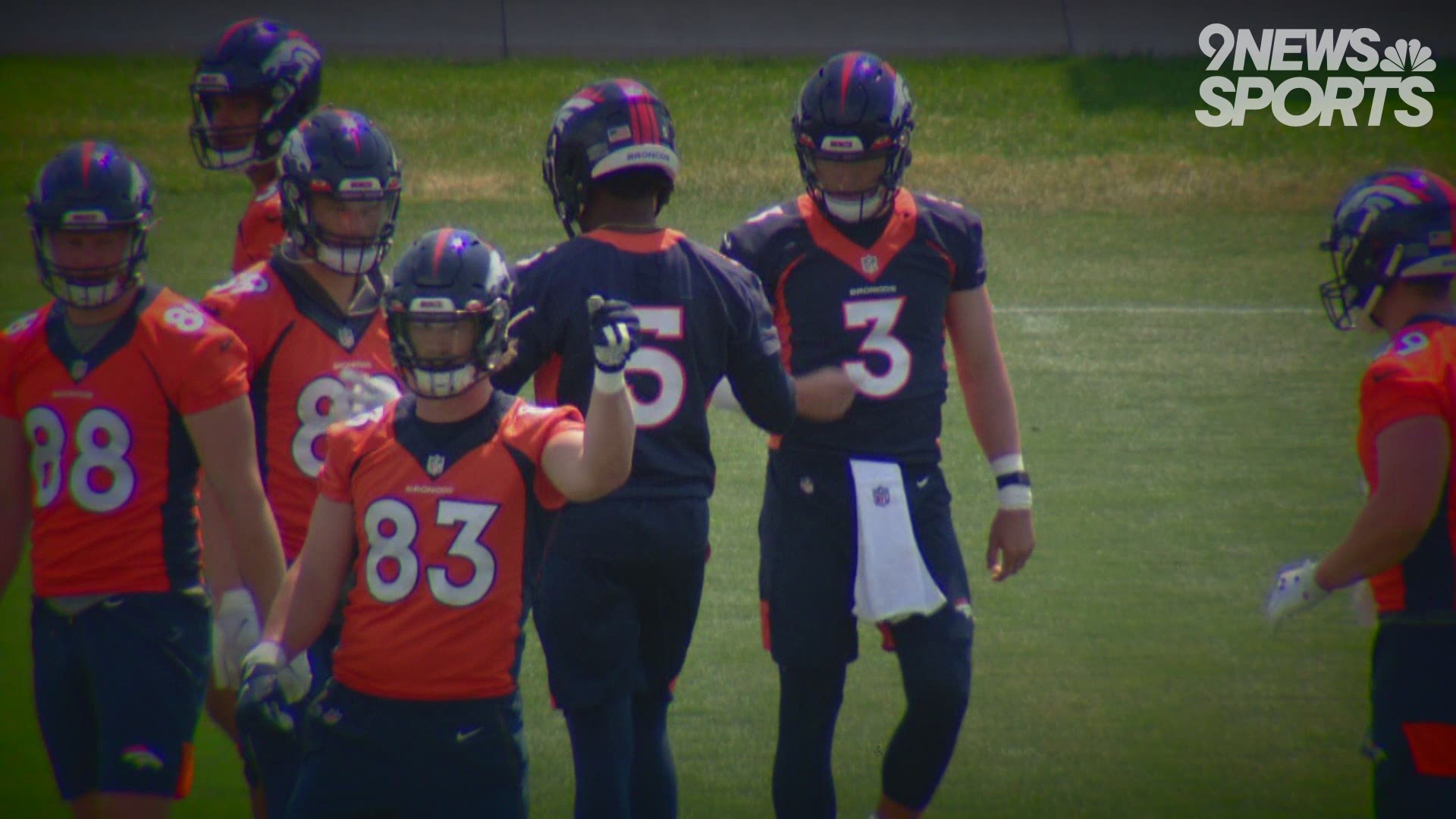 ENGLEWOOD, Colo. — What Drew Lock has discovered about the competition for No. 1 is the difficulty lies when it’s his turn to be No. 2.

Lock has always been No. 1, whether through future reservation or immediate status.

He was a four-year starter in college at Missouri. He was the starter-in-waiting as a Broncos rookie in 2019, then claimed the lead role for the final five games of that season and all of 2020.

And now here comes Teddy Bridgewater to seriously challenge Lock for No. 1.

Broncos head coach Vic Fangio has kept his word that Lock and Bridgewater would split reps 50-50. Which is fair only in the sense that it is halfway unfair for both.

On the final minicamp practice Wednesday, for instance, Bridgewater ran the first-team offense against the Broncos’ second-team defense. Lock was quarterback for not only a bunch of second stringers, but he had to go up against the likes of Ronald Darby, Justin Simmons and Von Miller.

Sure, Bridgewater was the better quarterback that day. But the competition was rigged.

"I would say the biggest mental adjustment would be not being with the guys I’ve been with for over a year," Lock said in a sit-down interview with 9NEWS last week.

Instead of throwing to Noah Fant, he drilled a pass to tryout tight end Kyle Markway, who couldn’t come up with it.

"You change the center, you change left guard, left tackle, right guard, right tackle, running back, our receivers, everything," Lock continued. "I think that was the weirdest part. You have a father sense to you: “Those are my boys. I should be out there with the boys.

"But I understand. This is a competition and I need to try and re-earn that spot. That’s my goal every single day. Focus on what I need to do, focus on my job and if I do that and just play confidently I think I can end up getting the job done."

The previous day, a Tuesday, Lock worked with the first team offense and had his best practice of the offseason, at least when the media was able to observe. He threw a nice misdirection boot pass to Fant in the flat for what turned out to be a big gain, he drilled a deep seam route to Kendall Hinton – in good times or in bad, Lock has always been a strong intermediate passer between the hashes – and he later had a nice red zone series.

"It’s practice. Like you said, you guys come out here and there and if it’s a bad day, oh man, there’s goes the town. But you miss the next two or three. You caught us on a good day today. But it is becoming smooth. I am confident in this offense and what coach (Pat) Shurmur has done this offseason to help me out and it’s meant a lot."

"I stopped throws 90s like when I was 13 years old," Bridgewater said. "My game is totally different from Drew’s game. Drew’s arm is off the charts. Some of the throws he’s able to make, you sit back and you admire it. For me, my game is trying to anticipate, trying to play fast, playing in rhythm because I know I’m not going to be the guy who can throw it 80 yards down the field."

Lock deserves credit for not resenting the new guy who is threatening to take his job.

"When you have a guy like Teddy who is so smart, you’ve got to pick his brain," Lock said. "Teddy’s been really, really good to me since he’s been here. I really appreciate him for some of the tendencies he’s had me going on. Just the way he’s looking at certain plays. The way he looks at protections. The way he goes about drill periods. It’s kind of like I said when I was originally with Joe (Flacco in 2019). It was really good to be around Joe and see what he’s been able to do and now that Teddy’s here, it opened my eyes to a whole new style of football. A whole new way of thinking. I think that’s where experience in this league comes into play. The longer you’re around, the more quarterbacks you get to be around, and by the end of it you pretty much have all the answers to the test and Teddy has been very, very helpful to me and really, really smart guy. Really smart."

Speaking of picking the brains of smart quarterbacks, Lock had two extensive film days this offseason with Peyton Manning. During those skull sessions, Manning pointed out what Lock did well, and what he needs to work on.

"We dove into it pretty deep," Lock said.

Step one for Lock was to get over the fact he was watching film with Peyton Freakin’ Manning.

"It was cool to sit in a room with him and watch the TV where it’s me playing," Lock said. "We watched a little bit of him playing but (if I could) look back on it 10 years ago, if I’m ever sitting in a room with Peyton Manning and I’m watching me play and he’s talking to me? That was kind of the reality I had to come to in that room.

"There’s just ways to fine-tune my thinking before plays and I think I wasn’t doing that enough in the past year. And now I can come in, I know what I need to be doing. Here’s this, this and this for this play and then let my natural instincts take over from that point."

Broncos veteran players now have 5 weeks off before they are to report back for training camp on July 27. Lock said he would take one week to decompress, but not two.

"Spend a little time back home in Kansas City and throw a little bit with my guy Justin Hoover and work out with some of my guys as well," Lock said. "And then come back here and be around the guys and keep throwing again."