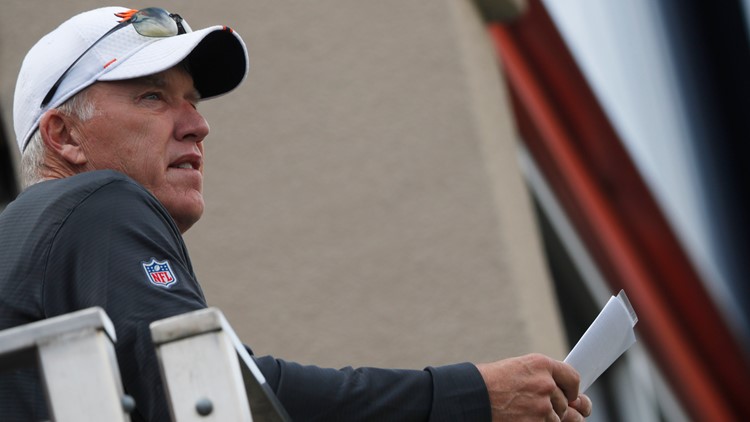 Elway would rather have NFL Draft pushed back, but team will be ready to go

ENGLEWOOD, Colo. — Given his druthers, Broncos general manager John Elway would like the NFL Draft delayed because of health and competitive considerations in light of the coronavirus outbreak.

But if it’s not delayed, Elway said he and his Broncos’ personnel department will be ready, even though the NFL is preventing all football leadership to work from home for at least two weeks starting Thursday.

The NFL Draft is scheduled for April 23-25. The full team headquarters shutdown of all football personnel is in effect until at least April 12.

"Obviously, it makes it easier if the draft’s pushed back," Elway told the team website’s Alexis Perry in an interview Thursday in which they were seated 7 feet apart. “Hopefully, we get back in the office in two weeks, April 9 or somewhere in that area.

"Really, we feel pretty good about where we are. We’d rather have it backed up so we can get all our scouts and everybody in. But if it’s limited and they’re not going to move the draft back, we’re in good shape.

"And I think one of the reasons why, with the (assistant) coaches not going to the Combine and them spending the whole week here (watching film) just on the college side, it’s put us way ahead because we have the coaches’ rankings already.

"The scouts are already working on next year a little bit to the 2021 summer manual. So we feel like we’re in pretty good shape. If it moves back, great, we’re ready for that. If it doesn’t move, then we’ll be ready for that, too."

RELATED: Report: 2020 NFL draft will no longer be held in Las Vegas

During the first 10 days of the 2020 league year and free agency that started last Monday, March 16 on through 6 p.m. Wednesday, Elway lead a skeletal personnel crew at team headquarters to one of the league’s most active player spending sprees.

Now the Elway 7 will disperse and work from their respective homes. They do so knowing the critical NFL Draft – where the Broncos need to select at minimum a starting-caliber receiver, another cornerback, another defensive lineman and more offensive line help – is scheduled to begin in four weeks.