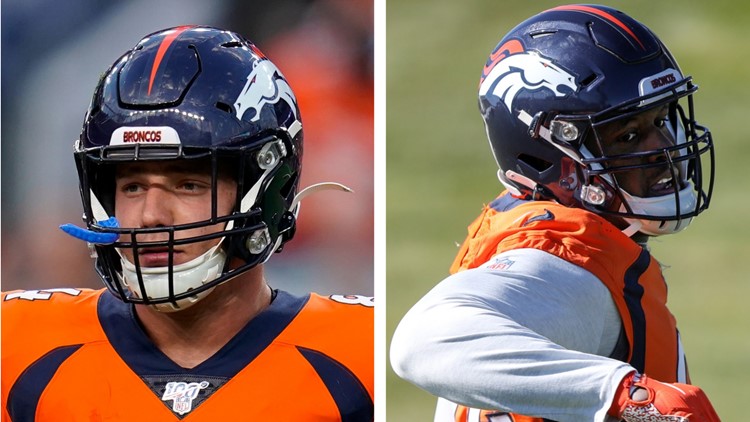 ENGLEWOOD, Colo. — At the very least, Troy Fumagalli and Jonathan Harris have got to be two in a million.

Not only teammates in the NFL, but Fumagalli and Harris were high school teammates at Waubonsie Valley High School, which is located 40 miles west of the Chicago Loop near the border of Aurora and Naperville, Ill.

“I’m proud of both them,’’ said Paul Murphy, who was head coach for the senior Fumagalli and junior Harris in 2012, when the Waubonsie Valley Warriors reached the Illinois Class 8A quarterfinals. “They’re both great kids and they're both great stories.’’

RELATED: Broncos notes: Fangio a thinker, not a screamer

Perhaps a pair of De La Salle and St. Thomas Aquinas high school teammates later crossed paths on the same NFL team, but even so, from a United States population of 327 million, having two Broncos from the same Waubonsie Valley High School at the same time is rare.

Especially when neither was highly recruited out of high school by top college programs.

Fumagalli is a Bronco by way of the 5th round in the 2018 draft after a standout career at Wisconsin. Harris is the newest Bronco after he was claimed off waivers from the Chicago Bears on Tuesday.

“Everything happened so fast I didn’t get a chance to reach out to (Fumagalli) yesterday but I saw him this morning when I got in,’’ Harris said in front of his new locker Wednesday. “It was good, it was cool. It’s nice to see a familiar face in such a different place.’’

Fumagalli was a senior tight end and middle linebacker for Waubonsie Valley in 2012 while Harris was a junior left tackle and defensive end.

Did Harris ever imagine he and Fumagalli would reunite in the NFL?

“I knew Troy would make it,’’ Harris said. “He was our leader in high school and obviously he was really good in college. I had a different route but this was a goal of mine my whole life.”

Did Fumagalli think Harris would make it to the NFL?

So about those great stories of a young Fumagalli and younger Harris?

“Jonathan was probably 6-5, 215 his senior year with us and he wasn’t getting any D-I offers. I kept telling these D-I coaches to look at his dad, look at his brother (Dwight) who played four years at Western Illinois. He’s going to fill out.’’

Harris was up to 255 by his sophomore year at Lindenwood University in Saint Charles, Mo. He’s 295 pounds now and became a Bronco most likely after Fangio received a strong recommendation from his friends with his former Bears.

“That was actually the best season we had when I was there,’’ Harris said. “We didn’t win the state championship, unfortunately, but we had a pretty good season.’’

The 10-2 WV Warriors suffered both of their losses in 2012 to rival Neuqua Valley, which can be likened to Cherry Creek High School in the Denver area in that it’s a public school with a high percentage of high-achieving student/athletes. One loss to Neuqua was 35-34 in double overtime and the other was 23-20 on a field goal with 6.9 seconds left in the Elite Eight playoff.

“It was (Fumagalli’s) group that helped us turn the corner,’’ Murphy said. “We had always been a playoff team when I first got here but we were always one and done in the first round. When their group got here, that’s when we started winning first-round, second-round games.”

RELATED: Say what? Von Miller on sack slump: 'Can't be stinking thinking and standing in a dumpster'

As timing would have it, Fumagalli and Harris reunited in Denver the same week Murphy is retiring as their high school’s head football coach. After 43 years of coaching, 30 as a head coach with Brad Childress’ former high school Marmion, and Waubonsie Valley, Murphy’s last game as head coach is Friday night.

“I was going to his retirement party tonight,’’ Harris, whose former Bears are in town this weekend to play the Chargers, said with a smile. “But I can’t now because … I’m here.’’

The next step for Fumagalli and Harris is to get on the field during NFL Sundays. Fumagalli left Wisconsin banged up and spent his rookie season on injured reserve. He played in the Broncos’ first three games this year, getting his first NFL catch against his hometown Bears, but has been inactive the past four games.

Harris, an undrafted rookie, played in two games for the Bears before his development was transferred to the Broncos. Still, they're both on the same 53-man NFL roster after coming from the same place.

“They both come from great families and they’re hard-working, yes-sir, no-sir type of kids,’’ Murphy said. “I guarantee you they’re doing whatever coach Fangio wants them to do to get better.”