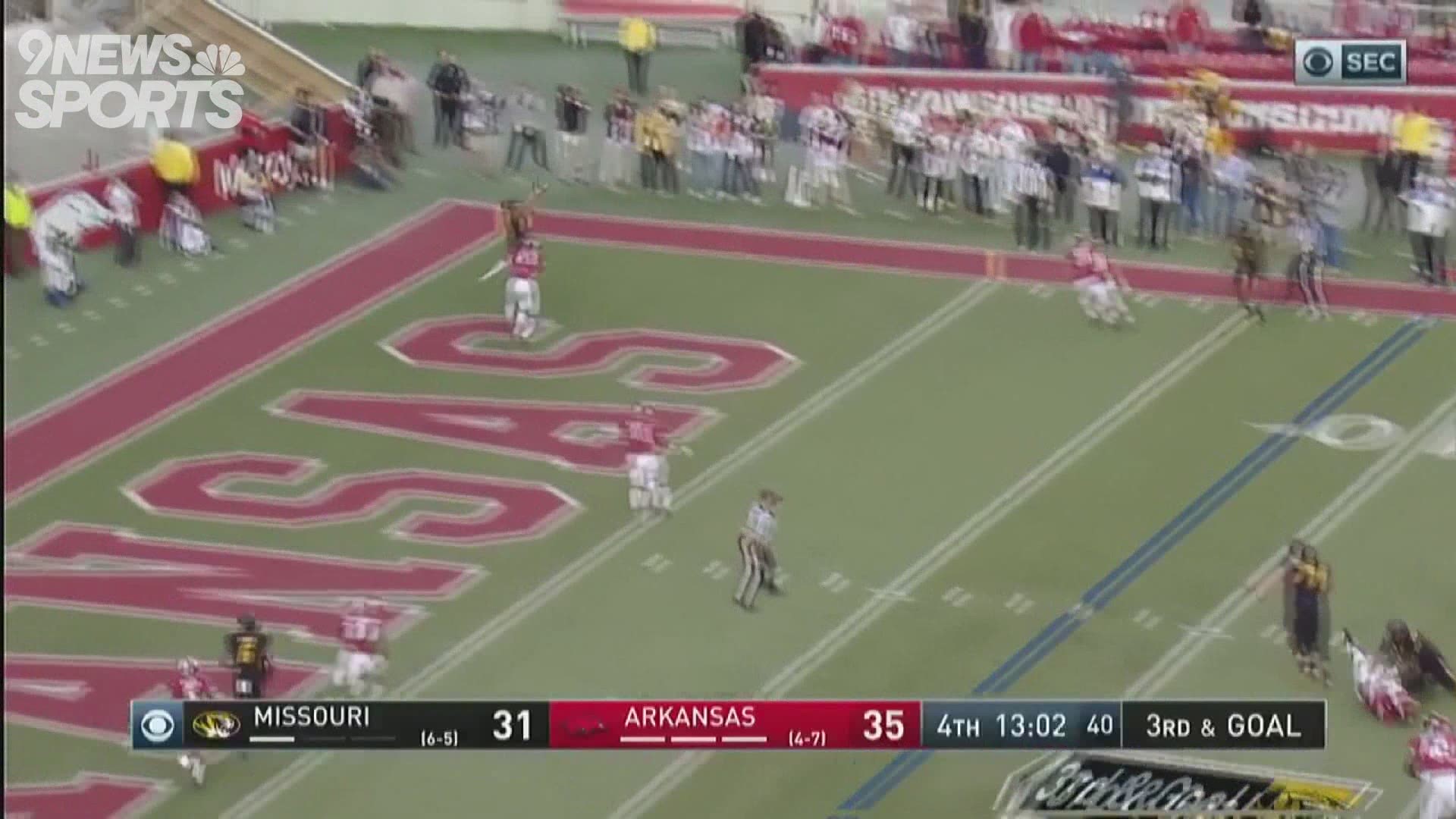 DENVER — In some ways, the Broncos selection of tight end Albert Okwuegbunam in the fourth round Satuday was a bigger surprise than receiver KJ Hamler in the second round Friday.

Yes, Hamler followed another receiver, Jerry Jeudy, who was taken in the first round. But at least Hamler brought one-of-a-kind speed.

Okwuegbunam is similar to Noah Fant, whom the Broncos took in the first round last year. Okwegbunam, like Fant, is a receiver-type tight end who has downfield speed for his size.

"I think Albert is a guy who has the ability where some people have put him in the same conversation as Noah,'' Broncos head coach Vic Fangio said in a post-draft interview with 9NEWS on Saturday evening. "But he didn't have the season this year that people thought he should have. Maybe he didn't play with the effort needed to excel at times. So it's our job to kick up his effort and get him back to playing to the full extent of his abilities. And I think we have a chance to do that. We're excited to have him."

In one offseason, the Broncos offense has gone from dreadful, to loaded to overflowing. General manager John Elway continued to add more offensive targets for Drew Lock by drafting the quarterback's former college tight end, Okwuegbunam, with the No. 118 overall selection in the fourth round Saturday.

"I can’t explain how fired up I am to get in this new offense and to have that chemistry and trust and confidence kind of is already established there," Okwuegbunam said in a Zoom video call with the Denver media following his selection. "Obviously going to have to learn a new offense and get comfortable in that. But as far as that connection already being there, that’s awesome."

The fourth-round selection of Okwuegbunam, which followed the free-agent signing last month of another tight end Nick Vannett, means veteran tight end Jeff Heuerman has assuredly played his last snap with the Broncos.

"He's still on the roster right now so we'll see how things play out,'' Elway said of Heuerman.

The Broncos’ third-round selection in 2015, Heuerman has one year and up to $3.875 million left on his contract. None of that money is guaranteed. The future of Jake Butt, a fifth-round draft pick in 2017, is also in peril. His promising NFL career has been hindered by multiple torn ACL injuries that has prevented him from playing all but three games through his first three seasons.

The Broncos then added Justin Strnad, a 6-3, 238-pound inside linebacker from Wake Forest known for his sideline-to-sideline coverage, in the fifth round.

"I feel very comfortable in pass coverage,'' said Strnad, whose senior season was cut short last October by a torn biceps injury. "I played safety in high school so it's something I've been doing for a long time.''

In the sixth round, the Broncos took oft-injured Fresno State guard Netane Muti. The 6-foot-3, 315-pound Muti started 14 games as a redshirt freshman for Fresno State but then missed most of his next two seasons with injuries. (Currently coming off a Lisfranc injury).

"I feel I'm the best guard in this class,'' Muti said in a conference call with the Denver media. "I feel like they really got a steal. I'm ready to give Bronco Nation my all and go out there and learn from the older guys in the O-line room and just be a part of the family and win games."

"We went in this with the idea we wanted to add some explosiveness on the offensive side and be able to put a lot more pressure on defenses than we have in the past three or four years,'' Elway told 9NEWS. "Coming out of it we felt like we got that accomplished.

"Obviously, you never know. They've got to go play. Vic and the staff has to take care of them and coach them and make them as good as they can be. But ultimately you never know until they tee it up.''

"I'm not going to have a full virtual team meeting on Monday,'' Fangio said. "We're going to break right into offensive and defensive positional meetings. I've maintained contact with all the players via the phone ever since this (coronavirus) shutdown has happened. So I'm going to keep communicating with them individually and after these three weeks the NFL is going to reassess where we're at and at that point I'll reassess where I'm at in communicating with them."

RELATED: Life of Jeudy: Broncos new receiver plans to gift some of his new riches on mom