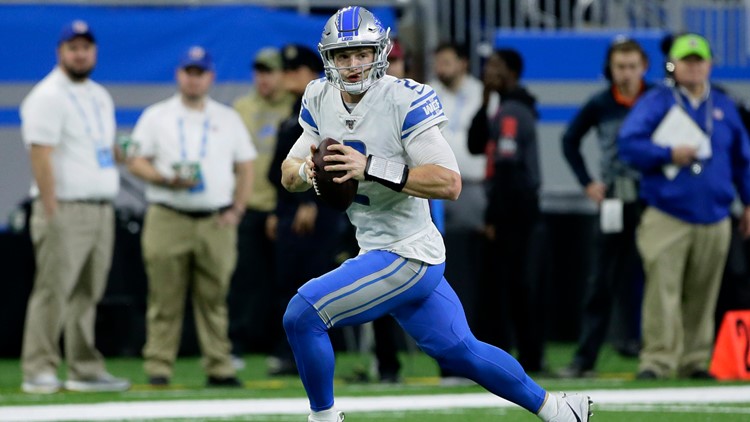 Photo by: AP
Detroit Lions quarterback Jeff Driskel (2) scrambles with the ball during the second half of an NFL football game against the Dallas Cowboys , Sunday, Nov. 17, 2019, in Detroit. (AP Photo/Duane Burleson)

A superior athlete – he ran a 4.56-second 40 at the 2016 NFL Combine that beat all quarterbacks – Driskel is considered a better scrambler and ball carrier as professional quarterback go than he is a pure passer.

So who isn’t these days? The new wave of NFL quarterback is Lamar Jackson, Kyler Murray, Josh Allen and Drew Lock. Daniel Jones rushed for 21 first downs as a rookie for Pat Shurmur’s Giants last year.

Patrick Mahomes is the league’s most lethal passer but his biggest gains often comes after he runs around for a while.

“More and more starters in this league are making plays, running around,’’ Driskel said Thursday in a conference call with the Denver media. “And it’s effective. If you go ask defensive guys and they have to account for a quarterback running around, it’s a whole new game plan.

“I think other people being successful with it in the league, whether it’s running the football or off-scheduled plays, I think that’s helped me a lot.’’

Cut as a sixth-round rookie in 2019 by the 49ers – even though he played well in a preseason game against the Broncos – and going just 1-7 in eight starts for lowly Cincinnati and Detroit the previous two years, Driskel nevertheless had a decent free-agent market last week. He wound up signing a two-year, $5 million deal with the Broncos that included a full $2.5 million guarantee for the 2020 season.

“Going into free agency you never really know where you might end up,’’ Driskel said. “It’s a matter of fitting with a team and fitting for yourself. And I kind of identified Denver earlier on in the process as one of, if not my target destination. Just because I’ve heard so many good things about the organization, the culture.

“And then the quarterback room with Drew and coach Shurmur, seeing how he worked with Daniel last year and all the improvement he had, I just felt like it was a really good fit for myself and for the team.”

When he took the job as Lock’s backup, one of the first Broncos he communicated with was Lock.

“He reached out to me right when I had signed, which I thought was really classy,’’ Driskel said. “A really cool ice-breaker to get to know each other as much as you can over the phone or text.

“I don’t know much about him except I’ve seen him play a few times. I know he’s a really good player with a lot of upside and I’m looking forward to working with him and helping him out in any way I can.’’