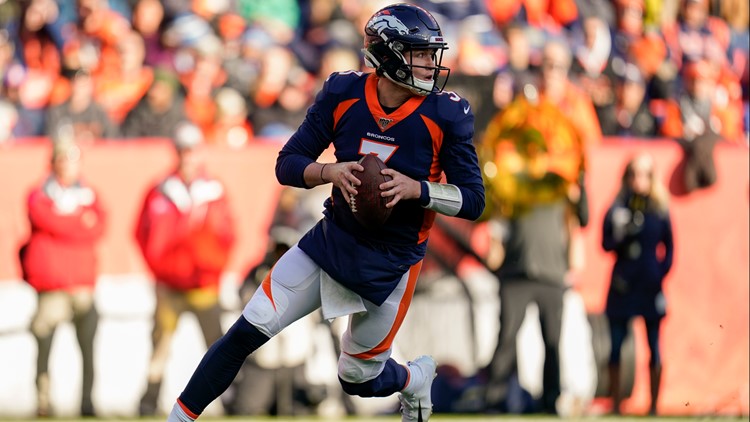 Photo by: AP Photo/Jack Dempsey
Denver Broncos quarterback Drew Lock plays against the Los Angeles Chargers during the first half of an NFL football game Sunday, Dec. 1, 2019, in Denver.

ENGLEWOOD, Colo. — If all goes according to Broncos’ plan, Drew Lock and Dalton Risner are going to play together for a long time.

They might as well have fun with each other.

Lock is the team’s new starting quarterback and as such he’s been in charge of the Broncos’ offensive huddle for going on two weeks. Only Risner, a left guard who has been playing with the starting offense a full 7 months and 11 regular-season games more than Lock has, is making sure his new QB is appropriately baptized.

“Dalton Risner likes to give me a lot of crap in the huddle, especially in practice,’’ Lock said with that boyish smile of his. “He’ll go up to the ball after I call a play, he’ll ask me, and say the exact opposite of the play pretty much.

“He’s just trying to get me all riled up, especially that first time out there where I was in the huddle. Buzz Lightyear was used, ‘To Infinity and Beyond,’ with the play calls on my arm, they got all of it ready for me. It’s been fun. It keeps things light for sure in practice. Dalton likes to talk.”

Risner was taken with the No. 41 overall draft pick by the Broncos in the second round. Lock was selected No. 42. Lock may be the quarterback, but Risner has hand.

>> Listen to the latest episode of Klis' Mike Drop podcast below

The Broncos may stink, and they’ve stunk for three years now – 5-11 in 2017, 6-10 in 2018 and 4-8 so far this year. But there is a talented young talent base from the past two draft classes that brings hope for better years ahead.

*Noah Fant, will lead all rookie tight ends in catches and yards.

*Risner, will be all NFL rookie team left guard.

*Lock, potentially the team’s quarterback from now on.

“Yeah, the future is bright. It really is,’’ Lindsay said. “You have to go through growing pains like we have been going through in order to be a great football team. You’ve got to go through the fire. You’ve got to know how it feels to lose and know how it feels to be in that certain situation, so that you can pull yourself out of it. That’s all it is.

Lindsay said it. There is no mistake about the most important player from this young core. It’s the guy Risner likes to tease in the huddle.