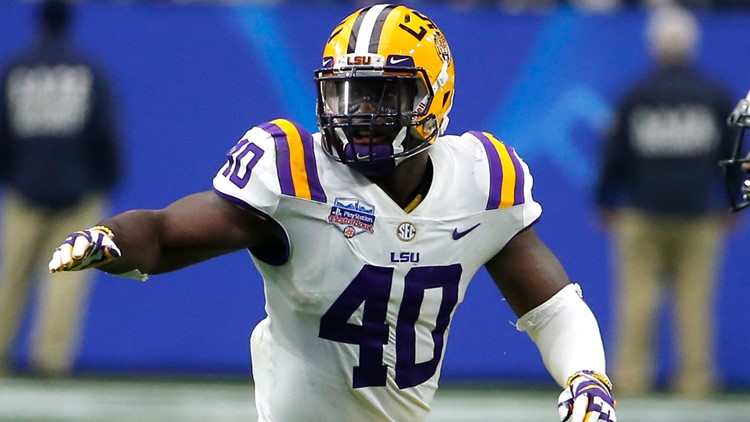 KUSA – All the picks are in. The Broncos know exactly where they will be selecting after they were shut out from the NFL Draft’s compensatory pick awards that were announced Friday.

The Broncos still have eight selections in the seven-round draft that will be held April 25 (first round), 26 (second and third rounds) and 27 (fourth through seventh rounds) in Nashville and the Broncos’ war room.

Even with the exact order of all 254 draft picks now set, all mock drafts are premature this time of year because the Broncos and other NFL teams will first attempt to address through positional needs in free agency. I would expect the Broncos to look at receiver, offensive line, nose tackle, cornerback and backup edge rusher in free agency.

I would expect them to address cornerback (they need two), inside linebacker, tight end, quarterback, backup edge rusher, offensive line and returner in the draft.

Understanding my limitations – (if Bill Belichick and John Elway have missed on their share of high-round draft picks, how am I supposed to know?) – I have called in a Mystery Mockster to help me with my first Broncos’ draft guess of the offseason. I’ll do a second mock draft two weeks after the free-agent frenzy begins and a third and final Broncos mock in the week leading up to the NFL draft.

Let me begin my educated guesses by saying it makes sense for the Broncos to trade back from their No. 10 selection in the first round to either Miami’s spot at No. 13 or Washington’s No. 15 selection.

Miami and Washington should be more desperate to select a first-round quarterback than the Broncos, who already have a trade for Joe Flacco in place. Teams looking to move up into the top 10 almost always do so for a quarterback.

Last year, the Oakland Raiders traded their No. 10 pick to No. 15 Arizona. The Cardinals took quarterback Josh Rosen while the Raiders wound up with offensive tackle Kolton Miller at No. 15 and extra picks in the third and fifth rounds.

With the Broncos finishing 5-11 and 6-10 the previous two years, they could use an extra draft pick or two as they seemingly need upgrades at several positions.

But for mock purposes, the Mystery Mockster and I decided to keep it to the Broncos’ current draft order.

The Broncos won’t re-sign Tramaine Brock and the odds aren’t great for Bradley Roby returning so cornerback is easily their most crying need.

But new coach Vic Fangio also places a premium on linebackers who can run. Broncos general manager John Elway had Georgia inside linebacker Roquan Smith as his Plan B to Bradley Chubb in last year’s draft.

Smith went No. 8 to the Chicago Bears – where Fangio was the defensive coordinator. Devin White is this year’s Roquan Smith.

The need for tight end may depend on whether the Broncos bring back starter Jeff Heuerman, who is about to hit free agency.

Even if Heuerman does return, though, the Broncos have so many injury questions marks in Heuerman, Jake Butt and Troy Fumagalli, they might want to take advantage of what seems to be a strong draft class for tight ends.

Most of the top draft bloggers rank Fant’s Iowa teammate, T.J. Hockenson, as the best tight end in the draft (Charley Casserly has him going No. 8 to Detroit).

Fant is about 10 pounds smaller than Hockenson but he also might be more a receiving matchup problem.

This goes along with the Broncos taking the linebacker White -- and not cornerbacks Baker, Murphy or Williams -- with their first-round pick.

A Love selection would make it three for three for the Broncos – third straight year they have taken a cornerback in the third round after they nabbed Brendan Langley out of Lamar with the No. 101 pick in 2017 and Isaac Yiadom out of Boston College with No. 99 pick last year.

Langley and Yiadom have not exactly been quick developers, although Yiadom came on in the final month of last season. The No. 71 overall pick is closer to the second round than it is the fourth so there’s a chance Love – who is widely considered the fourth-best cornerback in the draft -- will make it this far.

Connor McGovern may not like this. But how can you go through a Broncos mock draft exercise and not be tempted to take the namesake of the team’s current starting guard/center, Connor McGovern?

The Broncos’ Connor McGovern was a fifth-round draft pick out of Missouri in 2016. After not playing as a rookie, McGovern started the final five games of his second season at right guard, then started 15 of 16 games at right guard and center for the Broncos last year.

Penn State’s Connor McGovern is much bigger at 323 pounds, although he plays the same right guard and center positions as the Broncos’ Connor McGovern.

Connor McGovern Squared would at least bring some rare positive attention to the Broncos’ offensive line.

Two years ago, Elway took Chad Kelly, the nephew of Hall of Fame quarterback Jim Kelly, with the final pick of the draft. That didn’t work out because of Chad’s off-field behavioral issues.

Brett Rypien is the nephew of Super Bowl 26 MVP Mark Rypien. At Boise State, the 6-foot-2 Brett Rypien was a four-year starter who averaged a 64.0 completion percentage; 3,395 passing yards and 23 touchdown passes against 7 interceptions a season.

A strongside linebacker who would project as an inside linebacker in the 3-4. Listed around 6-2, 235 with 4.6/40 speed, Hanks was a four-year starter at New Mexico State who had more than 100 tackles in his final three seasons.

The Broncos’ new offensive coordinator Rich Scangarello could use a pure slot receiver and the Broncos as a team could always use a few more champions. Renfrow is undersized at 5-foot-10, 180, but he’s quick with good hands and he’s a big-game players, having played in four consecutive Final Fours – beating Alabama twice, and losing to Alabama twice in the final game of his season all four years.

A weakside linebacker who probably won’t last this late as he was the Big 12 Defensive Player of the Year last season as a redshirt junior. But he’s undersized at 5-foot-11, 230 (West Virginia listed him at 222 last season) so if he does fall, the Broncos shouldn’t pass on this active linebacker who had 19.5 tackles for loss and 7.0 sacks last year.

(Plan B to 237: Mitch Wishnowsky, punter, Utah -- which was clearly the Mystery Mockster’s pick as I would never bring in competition against Colby Wadman)