Art from San Antonio throws his support behind Drew Lock. Todd and Sanjeev back up Mystery Mockster. Remembering the Kollar-Watt connection. 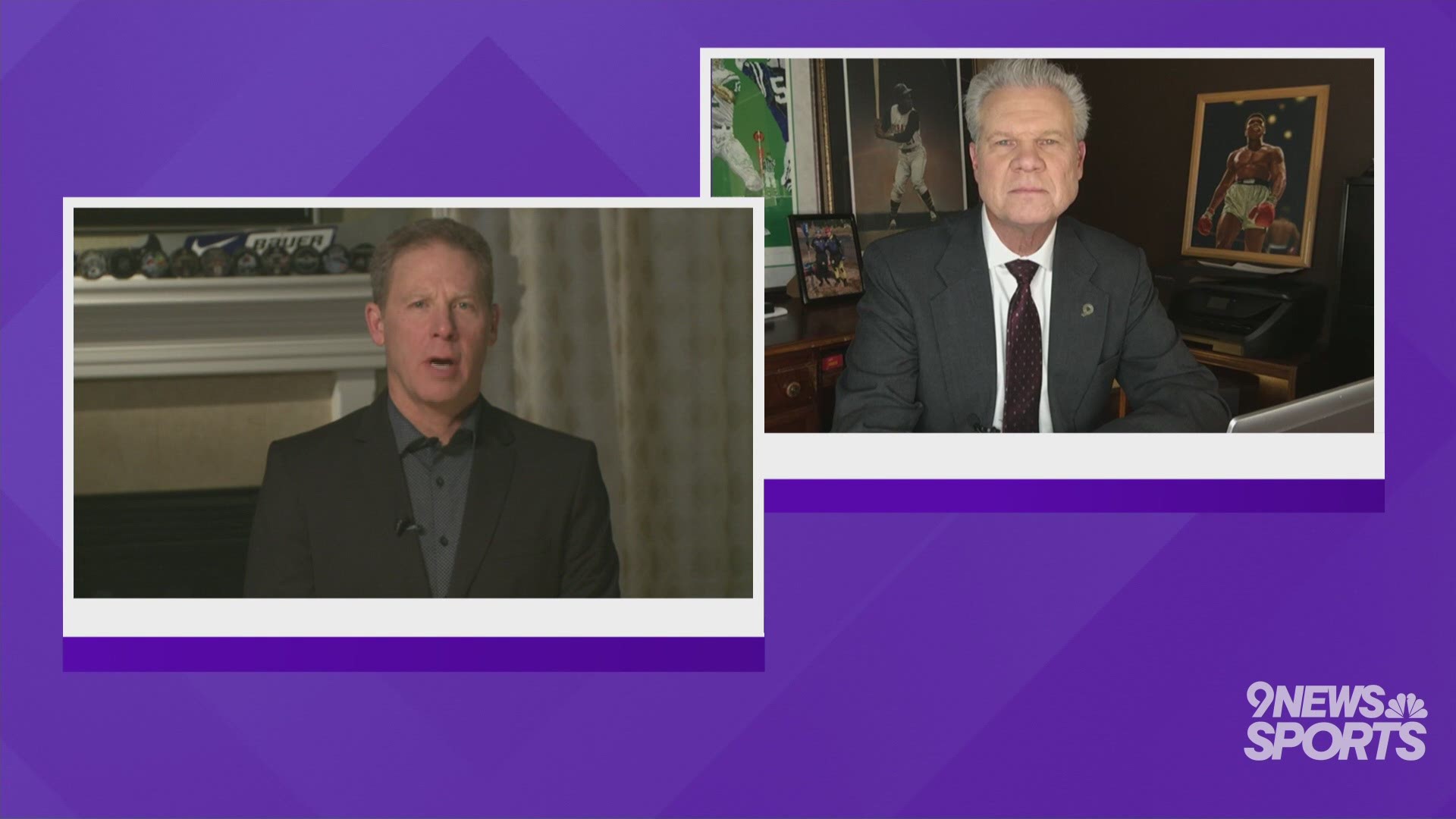 Mock drafts and J.J. Watt also get their due in this offseason edition of the Broncos’ mailbag.

Well thought-out article (On the Pros and Cons of Drew Lock and other QBs), Mike. After careful consideration, I still want Watson and not some over-the-hill or under-performing QB to "challenge" Lock. There isn't a PFM (Peyton ‘Freakin’’ Manning) on that list, even with those at the end of their career. Can you even imagine if Peyton played into his 40s ... Denver would have been so lucky! We were fortunate as it was to have him for a handful of years at the end of his career.

Karen – The Manning-Brady discussion reminded me of pitchers Steve Carlton and Nolan Ryan chasing down, and then surpassing, Walter Johnson’s long-held career strikeout record in 1983-84. I would have put Manning as the better quarterback when he was 37 years old (and Brady was 36) in 2013 and set the single-season passing records of 55 touchdowns and 5,477 yards, records that still stand. Just as Carlton at 37 in 1982, when he went 23-11, was a better pitcher than Ryan was at 35 that season.

As they exchanged sharing the strikeout record in 1983, I thought Carlton was the more deserving pitcher. I wanted him to have the record. But Carlton hit the wall at 40 in 1985 and finished a horrendous 16-37 in his final three seasons in his 40s. Ryan from 38 to 46 years old, the 1985-‘93 seasons, went 93-86. Ryan finished with the strikeout record of 5,714, which will never be broken. Carlton wound up not close with 4,136 strikeouts, which has since been passed by Randy Johnson and Roger Clemens.

Manning’s decline started with a quad injury in the second-half of 2014 at 38 and he hit his wall at 39 in 2015. Brady has won four Super Bowls since he was 37. And so Brady has become the undisputed most accomplished quarterback of all time, just as Nolan Ryan became the greatest-ever strikeout pitcher thanks in large part to their tremendous production in their late-30s/40s, an age period that an extremely few active athletes realize.

The article of which you speak, Karen, is here for those who didn't get a chance to see it.

Not sure what Drew Lock did to the NFL community as a whole (the mocksters, the analysts, the PFF-types, the fans, etc.) but it must have been bad. I'm not claiming he's the heir apparent but I'm also not trashing the dude. This has to be one of the most unfair evaluations of a QB in a long time. When is the last time a starting rookie QB didn't have an offseason or preseason? It's preposterous that anyone can evaluate him fairly.

We live in a world of twitter and knee-jerk reactions. Not to mention "draft experts" and "advanced metrics.” Thirty plus years of football watching and observing says give the kid an actual offseason, lend him some patience and a just a bit of understanding. Any Sherlock knows that Deshaun Watson might not even be the answer to the Patrick Mahomes’ problem in this division. At least we can "Lock" in our draft picks for the next few years and possibly groom a giant killer.

Art – There are many football experts inside Broncos’ headquarters – coaches, personnel executives and players. Some agree with your assessment, Art. And some disagree.

Your narrative sounds like excuses for Lock’s uneven performance last year, and they are, but they are also valid explanations.

While I also share much of your feelings about Lock, what I have struggled to reconcile is he finished as the 32nd rated passer and 35th, or dead-last, in completion percentage last season. If he finished as, say, the 22nd-rated passer and was 25th in completion percentage, then the lack of offseason while breaking in a new offensive coordinator would bring greater hope of winning quarterback days ahead.

I understand both sides here. I understand the Drew Lock supporters because he does flash remarkable talent and he has produced some outstanding games. And he is so young. But I understand those who say that while the kid may tantalize, he will never put it all together. He gets a little too careless at times, and simply misses his throw at others.

I do know this: It became obvious at various points in 2020 that the Lock-or-bust mentality was not healthy for the overall state of the team. When a young quarterback falters badly, and he stays in the game anyway, it sends the message to the rest of the team that his development is more important than trying to win that particular game.

At the very least, new Broncos’ general manager George Paton is expected to add a proven starting quarterback who can either compete with Lock during training camp and the offseason, or come off the bench if the game is getting sideways. An attempt at acquiring franchise quarterback Deshaun Watson and replacing Lock altogether is also possible but the odds of this happening are long for many reasons, starting with Houston may not make him available.

But as you inferred, Art, no matter what the Broncos do at quarterback, Mahomes is still with the Chiefs and they will remain the team to beat in the AFC West.

Why do I get the feeling that the Broncos are not pursuing Carson Wentz? Deshaun Watson is a Hail Mary at best in my opinion for many reasons.

Woody Paige suggested Tyrod Taylor. For a backup that's not a horrible option. I just didn't see anything from Lock which makes me believe he can be close to the guy in a division with Mahomes, Herbert and a good Raiders team.

Jon – Woody Paige? You mean the guy who co-authored the book, “Super Broncos: From Elway to Tebow to Manning,” following the 2013 season with me? A book that despite having the Foreword written by Jim Nantz, and also having then-Governor John Hickenlooper and current mayor Michael Hancock show up at our book-warming party (Woody knows people) sailed immediately into discount-bin oblivion with Manny Ramirez’s Super Bowl 48-opening hike into the end zone?

Woody may be on to something. Maybe not Tyrod Taylor exactly, but a Tyrod Taylor-like QB circa 2015-2020 – part-time starter/long-time backup. Jacoby Brissett would make more sense in 2021. Or maybe Mitch Trubisky or Andy Dalton or Jameis Winston or Teddy Bridgewater.

By the way, for those who can’t get enough of Broncos history, we updated our book following the Broncos’ Super Bowl 50 victory. So there are two editions of “Super Broncos,” the latest one is here.

Mike, agree with your mock draft totally!!!! Hoping the offensive tackle (Dillon Radunz) from North Dakota State is there in 3rd, thinking he’ll go in 2nd!!! George picking up Von’s option? Keep up the great job!!

Todd – I’ll pass on your kind words to the Mystery Mockster. (It was not me. But I’ll put my Mystery guy against all the mocksters out there.) Paton has until March 16 to pick up the $7 million guarantee option on Von Miller’s $18 million salary for 2021. Straight business, that’s a difficult option pick-up, especially with the team payroll getting reduced from $198.2 million to say, roughly $180 million. But business aside, letting Von Miller go would also be an enormous emotional blow to the organization and Broncos Country.

The logical compromise is to try and work out a new (and yes, reduced) contract before the $7 million guarantee option becomes due. And if it can’t be worked out? We got 30 days to get there.

Broncos need to draft a shutdown corner in the first round of the draft, inside linebacker in the second round and a right tackle in the third. Stick with Lock and sign a veteran to back him up. Build the team through the draft.

Sanjeev – You, too, are a devoted a follower of my Mystery Mockster. His top four rounds for the Broncos:

Here is Mike's Mystery Mock draft story for 9NEWS that was published Feb. 13.

Mike, any chance J.J. Watt considers Denver? I would think Green Bay or Pittsburgh makes the most sense but one can hope.

Danny – Watt’s first defensive line coach in Houston was Bill Kollar. They were together from 2011-14 at which point Kollar followed Gary Kubiak to Denver. But while Kollar at 68 years old is still in his prime coaching Broncos defensive linemen, Watt isn’t the same player he coached six or seven years ago. Watt has suffered early-season/season-ending injuries three of the past five years and he had just 5.0 sacks in 16 games this past season.

Still, the Broncos could use Watt. He would upgrade their defensive line. But Watt has already made big money. He’s already won three NFL Defensive Player of the Year awards, which already guarantees him election into the Pro Football Hall of Fame. What Watt wants now is to win a Super Bowl. He’s not choosing to join a team coming off, in reverse chronological order, 5-11, 7-9, 6-10 and 5-11 seasons.

Tennessee, Green Bay and Cleveland – each of whom reached the playoffs in 2020 – are reportedly the favorites.