Mike Munchak downplays hype, says 'I see myself as a teacher'

A series of special circumstances led the offensive line coach to make lateral move from Pittsburgh to Denver. 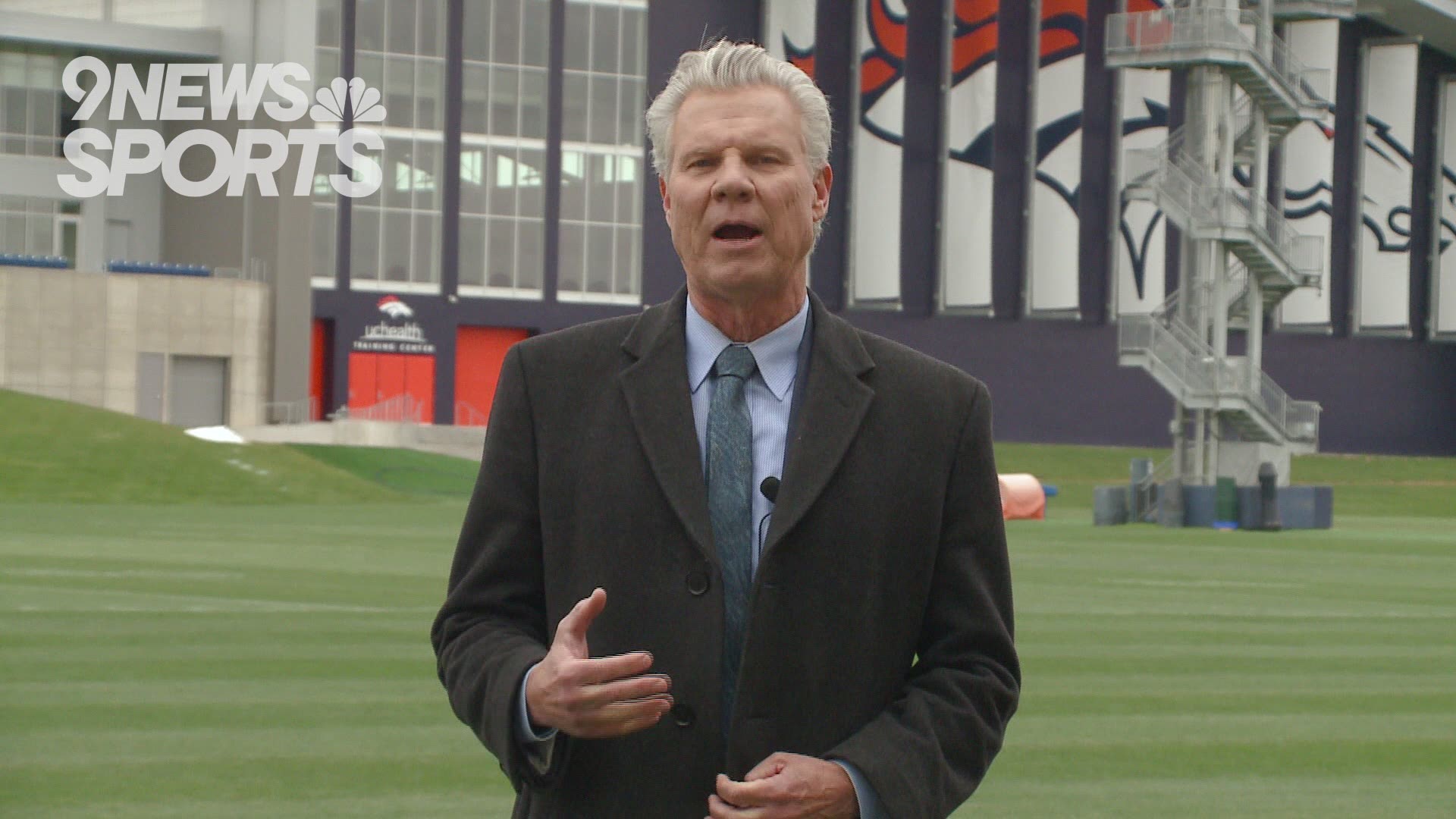 ENGLEWOOD, Colo. — For years, the biggest gripe about the Broncos has been their offensive line.

Aside from the head coaches and quarterbacks, of course.

But even in their Super Bowl 50 season, the Broncos’ offensive front was considered their weak link. Fair or not.

Broncos’ general manager John Elway shared these concerns. He revamped his O-line this offseason by signing Ja’Wuan James to the league’s richest right tackle contract and drafting left guard Dalton Risner in the second round.

Elway’s biggest move, though, was hiring away renowned offensive line coach Mike Munchak from the Steelers.

Munchak drew the greatest buzz – unusual for a position coach – and therefore comes in with that “hired gun” aura. Does he feel it?

"Not really. I’m here to do a job and I love what I do. I see myself as a teacher," Munchak said in a sit-down interview with 9News. "I understand the game. I’ve played it, I’ve coached it. I’ve been around a long time. Learned a lot of lessons by winning and losing, unfortunately. So I hope I can pass this along to this group of guys.

"And coming in, it’s fun. I get to come in and help develop a whole new offense together as a group, a new staff of coaches, get to know the players and then fit what’s best for them.

"I think coach Vic (Fangio) has done a great job with the way it’s been set up. We have a lot of meeting time, a lot of on-field time so I feel good about the direction we’re heading."

Munchak came very close to getting the Broncos’ top coaching position before finishing second to Fangio. After interviewing five candidates for the head coach position, Elway spent nearly two full days deliberating between Fangio and Munchak before settling on the Bears’ defensive coordinator.

The Broncos are lucky that any potential awkwardness or tension between Munchak and Fangio was alleviated in large part by their shared extensive experience with the game’s triumphs and failures, hirings and firings.

Win or lose, those who survive in the NFL never look back at burned bridges. Only ahead with shrugged shoulders.

"I thought about calling him when we were both interviewing," Munchak said. "Obviously, we’re from near the same hometown area and I’ve watched him for a long time. I know what a great job he’s doing with defenses, so a part of me wanted to call him – there’s some competitiveness to this whole thing, and we both had a great opportunity.

"Obviously, I thought he was very deserving of getting the job and doing his thing. It just worked out in a very unique way to have an opportunity to be able to come in and work with him."

Fangio, who will turn 61 two days before the Broncos’ third preseason game against the Rams, is from Dunmore, Pa. Munchak, 59, is from the neighboring town of Scranton, which “The Office” TV series and Dunder Mifflin paper supply company made famous.

Despite his roots to Pennsylvania – he played at Penn State before becoming a Hall of Fame guard for the Houston Oilers – Munchak and his wife, Marci, wanted to re-settle in the Denver area so they could be near their daughter, who moved here three years ago, and her family.

Ben Roethlisberger was aware of how family was tugging on Munchak’s heartstrings, which is why the Steelers’ quarterback stated his fear of losing the team’s offensive line coach at the end of the 2018 season.

"A lot of things came together at the right time," said Munchak, who had also been with the Houston Oilers/Tennessee Titans from 1982-2013 as a player, assistant coach and head coach. "I think this league and jobs are about timing. I loved my time in Pittsburgh. I’m from Pennsylvania. I hadn’t been around Pennsylvania for a long, long time and one of the things that brought me back there was family. So this was an opportunity where my contract was up and I had an opportunity in a place where my daughter is here, my granddaughter.

"I spent a lot of time in Denver the last couple years. I always knew that if an opportunity came up, it would make sense football-wise and with having family here it went well together. It just fit perfectly. A perfect storm type of thing for me and for all of us.

"And then the organization. I knew when I interviewed here, I knew what John Elway was doing here. I knew from having played here I knew the fan base is awesome. The following they have. It made the decision easy when the time came."

And then Munchak checked himself. He doesn’t talk much but when he does he is expansive while going nowhere near controversy, a trait he no doubt learned from his three seasons as the Titans’ head coach.

"It was hard," he said in the next breath. "It’s hard to leave guys you’ve worked with and as a coach, the players. That’s always the hard part. Hopefully you maintain those relationships, but this was a great challenge and made sense to be here and I’m excited to be here."

OK, then, coach Munchak, let’s see what you can do with Garett Bolles. The Broncos’ left tackle was a first-round pick, No. 20 overall, in 2017. And though he has flashed a unique athletic skill set and has improved considerably the past two years, holding penalties have been his millstone.

Can Munchak get Bolles to play consistently?

"I hope so. He’s going into his third year. And for an offensive lineman obviously a lot is expected of a first-round draft choice," Munchak said. “But the thing is he’s had a couple – I’ll be his three O-line coach in three years. People don’t realize how hard that is on the development of a player. So hopefully I can stay with him for a while and we can develop something.

"But he has obviously great skills. He’s a great athlete, can do a lot of things for ya. He’ll fit really well in this offense. So I’m enjoying our relationship. Getting to know each other. Getting to know what he does well, how I can help him going forward. Because there’s really nothing he can’t do."

It’s not just about Bolles, though. Munchak’s reputation is he better than anyone else has the ability to get five guys to block as one.

Block together and then the individual honors will come. In each of the past two seasons, the Steelers had three offensive linemen named to the  Pro Bowl in guard David DeCastro, tackle Alejandro Villanueva and center Maurkice Pouncey.

Thanks to Munchak’s offensive front, Roethlisberger and Steelers’ quarterbacks ranked 29th and 30th the past two years in sacks allowed while ranking 2nd and 3rd in passing yards. There were two Pro Bowl running backs – Le’Veon Bell in 2017 and James Conner last year.

Munchak must now incorporate his coaching, along with assistant Chris Kuper, with Rich Scangarello, the Broncos’ new offensive coordinator who favors the zone-blocking running game. It’s the type of system Munchak taught in Tennessee for eight seasons over two terms with offensive coordinator Mike Heimerdinger. But it’s been a while.

"I think it matches up well – it’s very tough on a defense to get a bead on what you’re doing. You try to take advantage of what they’re giving you. You get a lot of the same looks when you’re running different  plays. So I think that’s offensive line friendly. As an offensive line coach and offensive lineman, there’s a lot of stuff in there that really helps get our job done. A lot of it uses the athleticism I think our group has."

During his interview with 9News, Munchak was asked about two other offensive linemen who will start.

On center Connor McGovern, who was drafted as a guard, and broke in as a right guard before moving to center following Matt Paradis’ injury in the second-half of last season: “From the time we started spending time together in the building he’s been really positive. Really excited about his opportunity.

"He wasn’t sure what was going to happen (this offseason). Is he playing center, is he playing guard? I think it played out where he’s playing the position I think he’s best at. I think now that he knows what’s expected of him, what he has to do, I think he’ll continue to grow. He’s a young player that has so much upside.

"And like you said there’s a lot put on him. He has to help the guys around him. Every play is not on him, but he has to get us on the right page, get us in the right protection, make the right calls. As the guy holding the ball he gets everything started and he understands that and I think he’s excited for the opportunity."

On taking Risner the first chance the team got in the second round of the draft: "He’s just a football player.  He’s a good-looking kid, size-wise. Long arms. In that 315(-pound) range. Athletic.

"And he’s confident. I loved his confidence when I met him. And I think he brings a little energy to the room, to the building, to the team. And we all thought he would be a great fit for us if we got an opportunity to draft him."

The players so far have spoken about their new offensive line coach in glowing terms.

"Munchak is fantastic," McGovern said. "He gets it. There are a lot of coaches that played a couple of years in the league or played college ball and got hurt and then got into coaching. He’s a Hall of Famer. He’s seen every look. He’s played against great guys. He knows what it takes to beat anybody. He played against fantastic defensive linemen. Just his knowledge of the game and the little nuances that a lot of O-Linemen don’t event see and definitely the everyday person wouldn’t see, he’s so good at."

If Munchak can do for the Broncos’ offensive line what he did for the Steelers’ front, Denver's followers will have to find another group to complain about.