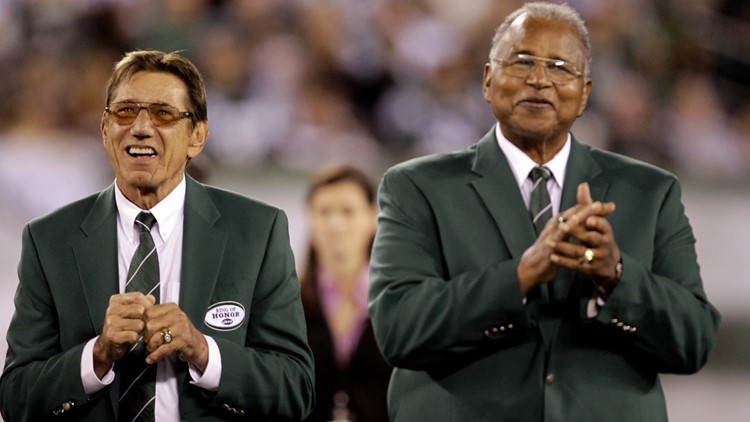 The city of Denver, though, should also be celebrating the Hall of Fame election of Winston Hill.

Known as the left tackle and blindside protector of New York Jets' quarterback Joe Namath during their historic upset of the Baltimore Colts in Super Bowl III in January 1969, Hill moved his family to Denver prior to that 1968 season and stayed in the area until he passed away in 2016 at 74.

"When dad died his teammates flew in from all over, including Joe,'' said Heather Hill, a professional actor and singer who splits her time between Denver and New York City, where she is currently performing in the Phantom of the Opera. "My dad had a contingent of the Jets coming in and out and a contingent of the Broncos coming in and out, supporting our family and loving him.''

The Jets' website asked Namath about Hill's candidacy for the Hall of Fame in the fall.

"As a football player, his record of winning games, winning teammates over, the number of years he played, the number of times he made all-everything — Winston Hill deserves to be in the Hall of Fame," Namath said. "What made Winston Hill one of the best offensive linemen to ever play was his ability to execute and protect the quarterback and block for the running game. If you look at one game, the Super Bowl, you see Matt Snell running that ball so many times behind Winston. Emerson Boozer was leading, too, and Dave Herman and other guys, too, but without Winston Hill that day – we don't win the championship."

"When dad died the Broncos sent a linemen vanguard,'' Hovlyn said. "Eight people, retired Broncos, headed up by Claudie Minor. And they sat in solitude for two hours in the back of the room where my dad's body was lying in state."

Winston Hill, his wife Carolyn and their three children -- son Marc is the youngest -- moved to Denver prior to the Jets' Super Bowl III season of 1968. Hovlyn graduated from Cherry Creek High School, Heather from Smoky Hill and Marc from Grandview.

Why would a New York Jet live in Denver?

"He took a cross-country trip with my mom. And they thought it was beautiful and said this is where we're staying."

9News received a wonderful letter via e-mail Wednesday evening from Hovlyn Hill-May following the announcement their father had been elected into the Pro Football Hall of Fame. (The ceremony in Canton, Ohio for the Centennial Class will be held September 16-19.) The letter reads as follows:

"Winston was a dynamic Colorado presence. Born and raised in East Texas, Winston and his wife Carolyn moved to Colorado before the legendary 1969 Super Bowl III Jets vs. Colts where they raised their family in Englewood with two daughters Hovlyn and Heather and son Marc.

"Following his outstanding 15-season NFL career he focused on entrepreneurship and community service and involvement. He owned the 'BBQ Pit' on 8th and Colorado Boulevard from 1980 to 1988 and 'Winston’s' in Larimer Square and 'Winston Hill's Ribs' in Centennial from 1991 to 2016. After his passing, his business partner Ron Mitchell continued the tradition with his daughters.

"He participated in joint ventures in restaurants spanning from downtown to unincorporated Arapahoe County. He was a concessionaire first at Stapleton and then at Denver International Airport. Following (dad's) passing, Heather Hill and Hovlyn May took over their father’s interest in his restaurants and are launching two ventures in the spring of 2020 -- first, Garbanzos on the B concourse at Denver International Airport, and then, in honor of their father, they are now relaunching his Centennial-based takeout barbecue restaurant as 'Winston’s Smoke' with general manager Jonathan Coggins.

"Winston was always committed to education, youth and community. For years, he served Thanksgiving meals alongside his barbecue mentor, Daddy Bruce Randolph, and made connections in the Denver community. He became great friends with Tom Graham, who spent the first two years of his six-season NFL career (with the Broncos) and with Claudie Minor, a veteran Bronco who played for nine seasons.

"He mentored younger professional football players and worked with Gilliam Youth Services Center and the Denver Indian Center where he volunteered with the youth sports program and even brought his grandchildren to attend training camps there. For 44 summers he coached youth with his teammates at the Joe Namath Football Camp in Massachusetts.

"Winston used his high profile to connect with those around him. His induction into the Pro Football Hall of Fame is a testament to his greatness as a player and a person. His numerous accomplishments were used as a bridge to reach out and inspire others and his humility engendered the trust of those around him. He had a heart for youth, community and his home state, Colorado.''

"I think my dad was the only non-Bronco who was invited to more Broncos-only parties,'' Hovlyn said with a laugh. "He was an honorary Bronco.''