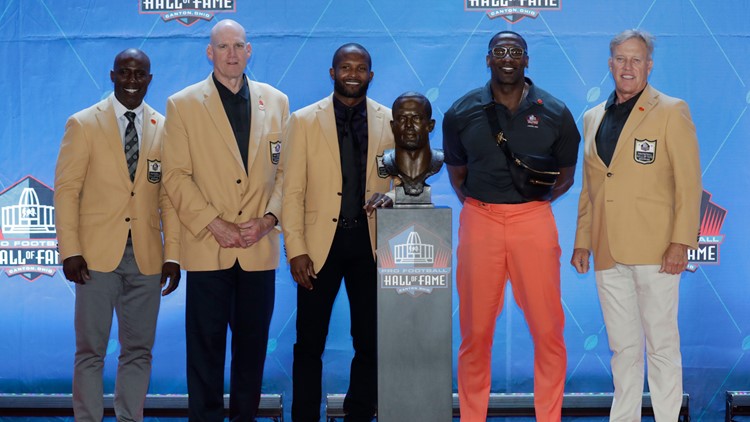 CANTON, Ohio — After a six-minute video tribute that touched on the success of Pat Bowlen the Broncos’ owner and humility of Mr. B the man, the bust was unveiled.

It was at that moment that it struck his oldest son, Patrick III, that dad was a Hall of Famer.

"Yeah, exactly, it hit me right there but I was impressed with the way they did it," Patrick III said to 9News after his dad’s enshrinement into the Pro Football Hall of Fame. "It looked really, really close to him so I’m really happy about it."

Former Broncos cornerback Champ Bailey unveiled his bust and went into the Hall of Fame with 30 minute, 30-second speech. Champ spent the first 25 minute thanking all those who helped him.

"And I’m super proud to be standing here today as the seventh member of the Denver Broncos to go into the Pro Football Hall of Fame," Bailey said.

In the final minutes, Bailey made an impassioned social plea for black men.

From Billy Thompson and Tom Jackson from yesteryear, to Gary Zimmerman and Rod Smith of more recent vintage, to Von Miller and Chris Harris Jr. of today, Broncos players made the trip to Canton in honor of their late owner. Pat Bowlen and Champ Bailey were the sixth and seventh Broncos to be inducted into the Hall of Fame.

"I mean even though we have practice tomorrow I was like I’ve got to sacrifice to be out here and support them," Harris said. "And Mr. B took a chance on me and Champ is a guy who instilled a lot of confidence in me at an early age. So definitely I owe them a lot of thanks and I’m glad to be here."

Some old coaches were here, too. Namely, Mike Shanahan and Gary Kubiak.

"You’ve got a great Hall of Fame owner, you’ve got a Hall of Fame player – Pat made that happen," Shanahan said. "He took great pride in giving you the chance to be best at what you did."

RELATED | Bowlen kids confident they can carry on their father's legacy

"And to have Steve (Antonopulos) be the presenter," said Broncos president Joe Ellis. "Steve was I think the guy Pat trusted the most in the organization through all of his years as owners. I tell you it was really special to sit there and take it all in."

It was a bittersweet moment as Mr. B died seven weeks ago after a long battle with Alzheimer’s and wasn’t here to enjoy the honor.

But his bust will now live on forever in the Hall of Fame museum.

"It went great," said Patrick III. "Very emotional but very exciting and he’s in there now. He’s in there forever and that’s all that matters."

RELATED | Hall of Famers have ups and downs, too: Champ reflects on fabulous 2005-06 seasons, tragedy of Darrent Williams