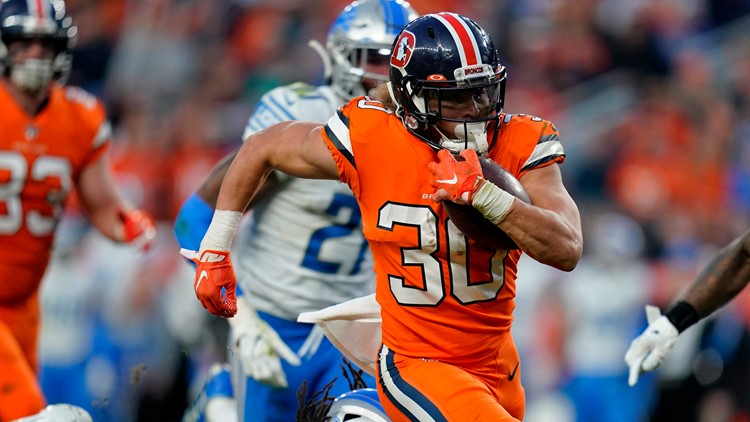 Photo by: AP
Denver Broncos running back Phillip Lindsay (30) breaks free from the grasp of Detroit Lions linebacker Jalen Reeves-Maybin (44) for a touchdown during the second half of an NFL football game, Sunday, Dec. 22, 2019, in Denver. (AP Photo/Jack Dempsey)

This time, it was a simple, clean-up arthroscopic procedure, according to the source, and Lindsay should be ready by the start of offseason team work tentatively scheduled for April 20. The Broncos top rusher has already been rehabilitating the wrist at the team's headquarters.

Lindsay first suffered the injury in game 15 of his rookie 2018 season at Oakland. He missed the entire 2019 offseason to rehabilitate the injury but he was full-go by the start of training camp. Lindsay then recorded is second consecutive 1,000-yard rushing season – the only undrafted player in NFL history to start his career with back-to-back 1,000-yard milestones.

At season’s end Lindsay said there had been discomfort in the wrist throughout the season. Apparently that led to the decision for a clean-up procedure.

Denver Broncos quarterback Brandon Allen (2) hands off to running back Phillip Lindsay (30) against the Cleveland Browns during the first half of NFL football game, Sunday, Nov. 3, 2019, in Denver. (AP Photo/Jack Dempsey)
AP

Undrafted out of the University of Colorado, Lindsay is eligible to have his contract renegotiated and Broncos general manager John Elway said at his season-ending press conference Dec. 30 he was willing to do right by his star running back.

“Yeah, we’ll look at that,’’ Elway said. “Obviously, Phillip has done a tremendous job and being the first college free agent to go over 1,000 yards (in back-to-back years to start his career).

“As Vic said last night, there are 32 dumb dumbs that didn’t draft him and I was one of them. Thank God we talked him into coming here.”