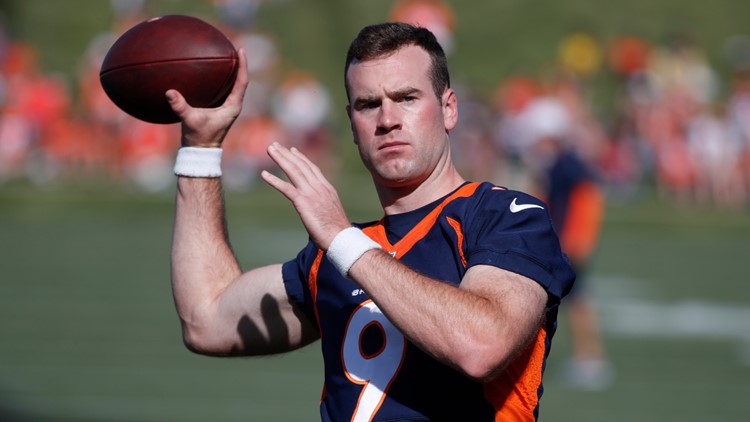 Rough camp practice for Hogan does not mean Lock is ready for No. 2 QB

ENGLEWOOD, Colo. — This competition for No. 2 Broncos quarterback is looking much like the No. 1 QB battles of recent years past.

The winner may be who doesn't lose it.

Kevin Hogan, the veteran with game-day experience, had a rough practice Friday, throwing three interceptions – one to inside linebacker Joe Jones, another to safety Su’a Cravens, and finally to cornerback De’Vante Bausby.

"Why can’t you look at those as good plays by the defense?" said Broncos’ head coach Vic Fangio, a defensive coach through and through.

Drew Lock, the rookie, didn’t necessarily have a great performance. And as head coach Vic Fangio said afterwards, Lock has a ways to go.

But he didn’t throw three picks. So far, the No. 2 QB battle between Hogan and Lock has been reminiscent of the 2016 competition between Marc Sanchez, Paxton Lynch and Trevor Siemian for starting QB. Siemian's steadiness won the day after Sanchez was mistake-prone and Lynch was wildly inconsistent.

So will Fangio consider moving up Lock, who has been operating the No. 3 offense, ahead of Hogan?

"It is way too early to start getting any thoughts that way," Fangio said.

How much sample size does the coach need?

"I don’t think there’s anything etched in stone," he said. "You’d like to see more practices, a preseason game or two."

RELATED | And on first day of camp, Broncos fans could see Flacco has no competition for starting QB

Fangio didn’t say it, but the move to No. 2 figures to be made regardless of how Hogan performs. It’s more about when the coaches believe Lock is ready to become one play away from playing NFL quarterback on Sundays. He’s not there, yet.

Lock does play loose. There is a joy to his game. There are also many second base and shortstop-type throws where he delivers from low angles.

"I think a quarterback who can change his arm angles is a positive when it’s needed," Fangio said. "I don’t think you want to do it when you don’t have to."

Lock was a four-year starter at Missouri, where he played in the mighty SEC and his QB record was 21-25. He may have developed those arm angles out of desperation.

RELATED | In the end, Drew Lock told his high-powered agents to stand down

"His college offense really had no carryover to pro offenses," Fangio said. "He was under duress a lot of times. A lot of his plays he was running around. I don’t think he’s as far along being an NFL-ready quarterback as he could have been. … He’s not a quarterback yet. He’s a hard-throwing pitcher who doesn’t know how to pitch yet. The faster he gets that the better off he’ll be and we’ll be."