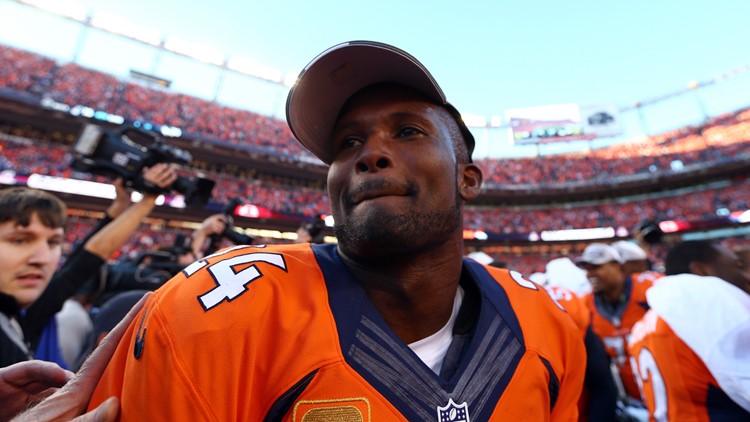 Photo by: Getty Images
Champ Bailey #24 of the Denver Broncos celebrates their 26 to 16 win over the New England Patriots during the AFC Championship game at Sports Authority Field at Mile High on January 19, 2014 in Denver, Colorado.

Shouldn't Champ Bailey and his 12 Pro Bowls be a Hall of Fame lock?

ATLANTA — It’s a bit perplexing that Tony Gonzalez and Ed Reed are considered slam dunks for election into the Pro Football Hall of Fame on Saturday, yet Champ Bailey is not.

In the great history of the NFL, only three defensive players had more Pro Bowl appearances than  Bailey. Merlin Olsen had 14. Ray Lewis and Reggie White each had 13. All were elected in their first year of HOF eligibility.

Bailey had 12 Pro Bowls. Reed, the lock, had 9 Pro Bowls. What are we missing here?

“Maybe, they don’t know what they’re talking about," Bailey said Friday in a sit-down interview with 9News. “You know, I let people analyze the way they want to. I don’t dwell on it. There’s nothing I can really do. All I can do now is enjoy the  process. Meet some of the current Hall of Famers. Talk to some of the finalists.

“A guy I’ve played with, John Lynch, has been a finalist six times. Who am I to complain about this process? Let it play out and let the writers do their job."

Less than 24 hours from the vote by a 48-person Hall of Fame committee, there is some buzz New England cornerback Ty Law could edge out Bailey for one of the five men elected from the modern-era ballot. Bailey is still the favorite. But an upset is possible.

Which is a head scratcher because Law only had five Pro Bowls – seven less than Bailey. Law did have one more career interception – 53 to Bailey’s 52. And Law picked off the Indianapolis-version of Peyton Manning five times in a two-playoff game span, plus had a pick six against Kurt Warner in the Patriots’ 2001-season Super Bowl win.

An oh yes, Law was part of two Super Bowl championship teams (he was hurt and didn’t play in the Pats’ 2004 postseason).

Still, the eye test said Ty Law was no Champ Bailey. So did 12 Pro Bowls to five.

Understand, every single voter agrees Bailey is a Hall of Famer. He will be voted in at some point – no doubt next year if not this year. But there is something special about going in on the first ballot.

“I really look at two guys when I think about first-ballot corners: Darrell Green and Deion Sanders," Bailey said. “Two mentors early in my career, first and second year in the league, I got a chance to play with both these guys. And to continue to follow in their footsteps in that way would mean everything. Because I know it would mean something to them as well as mean something to me."

Three other defensive players equaled Bailey with 12 Pro Bowls: Ken Houston, Junior Seau and Randall McDaniel. Houston and Seau were elected into the Hall of Fame on the first ballot. McDaniel had to wait until his third year of eligibility and second year as a finalist.

Bailey would like to go in on the first try for Green and Sanders. And he’d like to go in this year so he could join Broncos’ owner Pat Bowlen in the Hall of Fame class of 2019. Bowlen is expected to be rubber-stamped into the Hall on Saturday as a contributor.