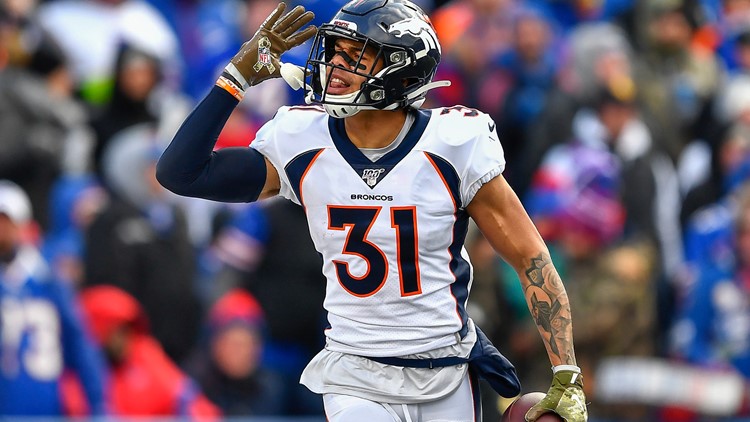 MIAMI — Down and dirty business has a way of affecting personal relationships.

Until Justin Simmons’ contract talks with the Broncos gets down and dirty, though, he’s fine with Rich Hurtado’s leap across the bargaining table from his side to the team’s side.

Simmons is a Broncos’ safety who is likely to be halted from unrestricted free agency by either a multiyear contract extension within the next five weeks, or a franchise tag by March 10.

A new multiyear contract would make Simmons happy. The franchise tag is almost universally scorned by players because it lacks guaranteed money past one year. Simmons, though, is one of those eternal positive-minded athletes who can find good in anything.

Hurtado, for instance. For the past several years, Hurtado worked for the sports agency Creative Artists Agency (CAA) that has represented Simmons for the past two years. Last week, Broncos’ general manager John Elway hired Hurtado away from the  agency business and put him in charge of the team’s salary cap and contract negotiations.

Yes, there’s a way to get deal done that is good for all parties and blah, blah, blah. But a boss is a boss, and Hurtado now answers to Elway.

“It’s crazy because for the past 11 years he was a player advocate and now switching over after with Sullivan, what happened there, and plugging in for the Broncos,’’ Simmons said during his red carpet stroll prior to the NFL Honors show in which he received an invitation as a Walter Payton Man of the Year finalist.

Simmons referenced the Broncos not renewing the contract of Mike Sullivan, who had been the team’s cap guy and negotiator the previous eight years. Sullivan has been replaced by Hurtado.

“You know, it’ll be interesting, but it will be fun. He’s a great guy. Obviously, in my opinion a great hire because I’ve known him. I’m excited for him.’’

Simmons has strongly hinted he would play on the tag, but again, contract talks have yet to become serious.

All franchise tagged players are advised to hold out until a new multiyear contract is finalized. In past years, the Broncos’ Matt Prater (2012), Ryan Clady (2013), Demaryius Thomas (2015) and Von Miller (2016) all held out from the team’s offseason practices in protest of their respective franchise tags.

And, yet, all reached agreements on multiyear contract extensions in the weeks prior to the start of training camp.

“My whole idea is I can’t control it if it happens or not,’’ Simmons said of the franchise tag. “But if it does happen, I don’t know if I’m the type of guy who would sit out. Playing is my passion and if it happens, it happens.

“Obviously, we’d like to get a long-term deal done and speaking with Elway and all the guys there, they’re great and I love the system. I think the system fits for both parties -- for myself and for Vic (Fangio, the Broncos’ head coach who leads the defense.)

“We’re just excited, like I said. It’s a time where you don’t get in this position often and we’re trying to find ways to enjoy it.”