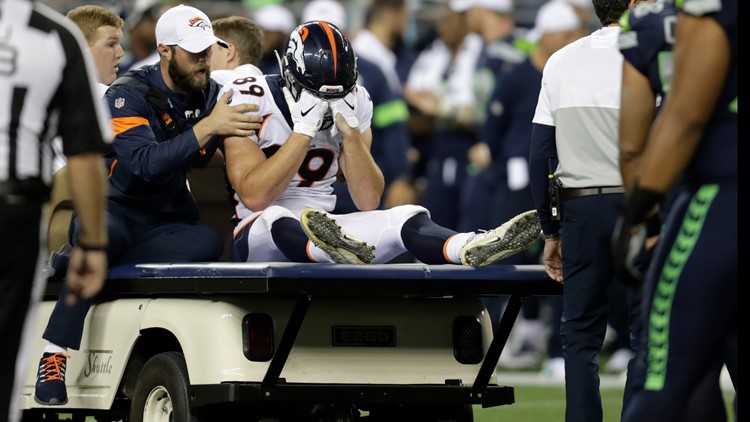 The Broncos got mixed news from their MRI results Friday.

First, some encouragement. Fullback Andy Janovich will miss six to eight weeks – and not the season, as the team initially feared – with a strained pectoral injury, a team source told 9News.

Janovich suffered the injury in the second quarter of the Broncos’ preseason game loss Thursday night to Seattle.

"Better than we expected," said the source.

It still means the Broncos will likely have to make an adjustment at their fullback position for the first two to four games of the regular season. The only other fullback on the Broncos’ 90-man roster is George Aston, an undrafted rookie from Pitt.

Now the tough news. Austin Fort, an undrafted rookie tight end who had been among the Broncos’ most pleasant offseason surprises, is lost for the season after tests confirmed a  torn anterior cruciate ligament, league sources told 9News.

Fort had made a nice, leaping 29-yard catch on a pass thrown by Drew Lock in the fourth quarter of the preseason game at Seattle. Fort landed awkwardly on the CenturyLink Field turf and it became immediately apparent he had suffered a serious injury. The University of Wyoming product was carted off the field and is headed for season-ending surgery.

The Broncos’ top three tight ends are Jeff Heuerman, Noah Fant and Troy Fumagalli while Jake Butt is also trying to recover from his own ACL injury.

The Broncos are now averaging two serious injuries per preseason game. In the preseason-opening Hall of Fame Game on August 8 in Canton, the Broncos lost defensive lineman Billy Winn to a season-ending partially-torn triceps injury.

Linebacker and special teams standout Joe Jones also suffered a partially torn triceps in the HOF Game, but there is hope he can return either by the start of the regular season next season or shortly thereafter.

Bisnowaty was a sixth-round selection in the 2017 NFL Draft by the Giants, for whom he played one regular-season game.