CANTON, Ohio — There were no funny stories. Well, one, when Steve Atwater talked about how he met Letha, his wife of 30 years.

"First time I saw you walking across the campus I knew we’d be together," said Atwater, who played his college ball at Arkansas. "When I finally got the courage to tell you, you looked at me like you had a whole lot of brothers who told you to stay away from those athletes."

Otherwise, Atwater’s 8 minute, 44 second Pro Football Hall of Fame induction speech was a simple, highly gracious and classy speech that thanked every one who helped carry him through his journey.

To the surprise of no one who knows him. Atwater is a rare former star athlete known to offer warm greetings before his recipients can gush in his presence.

They don’t have a Hall of Fame for good people, though. (Do they?) Atwater received his bronze bust here Saturday night as part of the Pro Football Hall of Fame class of 2020 because he was a dominant 10-year safety for the Broncos. He was named to 8 Pro Bowls and finished his stint in Denver with back-to-back Super Bowl championships.

Besides all that, his Hall of Fame presenter and longtime safety mate Dennis Smith put it best.

"Steve was an intimidating force on the field who made plays at big times and that’s the type of player you want in the Hall of Fame," Smith said during his taped presentation that was shown on the large video boards.

It started to drizzle at Tom Benson Hall of Fame Stadium in the seconds prior to Atwater took the stage. It stopped by the time he had thanked everyone.

The highlight of the speech was when Atwater asked for all his former Broncos teammates to stand and be recognized.

Alfred Williams, Rod Smith and Neil Smith, Gary Zimmerman, Ray Crockett and Mark Schlereth, among others. There were close to two dozen former teammates who showed up to help Atwater celebrate his special moment.

"It was truly an honor to play with each and every one of you," Atwater said.

He thanked coaches and teammates from high school to college to the pros, including those in his one season of 1999 with the New York Jets. He especially had kind words for late Broncos owner Pat Bowlen. 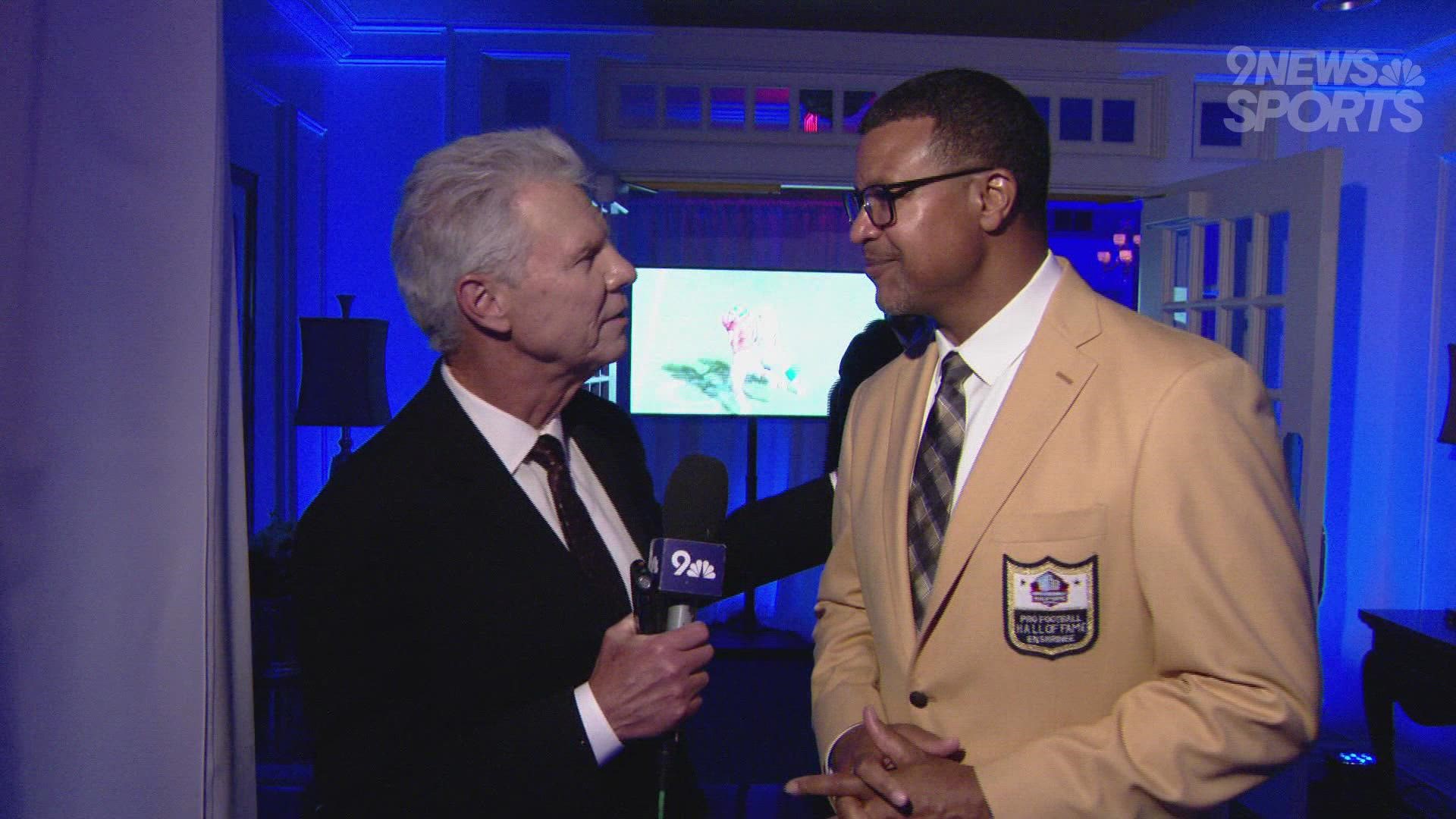 "Mr. B was a kind, generous man who knew how to make you feel special," Atwater said. "I appreciated all he did for our team. What a phenomenal leader he was."

"The most organized and disciplined person I ever met in my life," Atwater said. "And obviously the coach who led us to those back-to-back Super Bowl victories."

He thanked Hall of Fame president David Baker, then the local media, most notably Jeff Legwold, who is the Denver chapter’s Hall of Fame voter.

"Thank God for bringing us all together despite the terrible pandemic," said Atwater, whose induction was supposed to be held last year, but was delayed a year because of COVID-19 fears. "Congratulations to the Class of 2020. A little bit of a wait but we’re in this thing now, right?"

He thanked his dad Jeff and late mom. His siblings, his in-laws, his children. And he thanked Letha, whom he won over by giving her brothers nothing to worry about.

"We became friends first in our relationship and it’s something that I cherish dearly," Atwater said. "You are strong, loving and giving and I thank you."

To finish, Atwater raised his voice and shouted: "And finally, thank you Broncos Country!"

Atwater is the eighth "true" Bronco in the Hall of Fame who called himself a Broncos first, following Elway, Zimmerman, Floyd Little, Shannon Sharpe, Davis, Bowlen and Champ Bailey.

Peyton Manning and John Lynch, four-year Broncos who played the bulk of their career elsewhere, will be inducted here Sunday night.