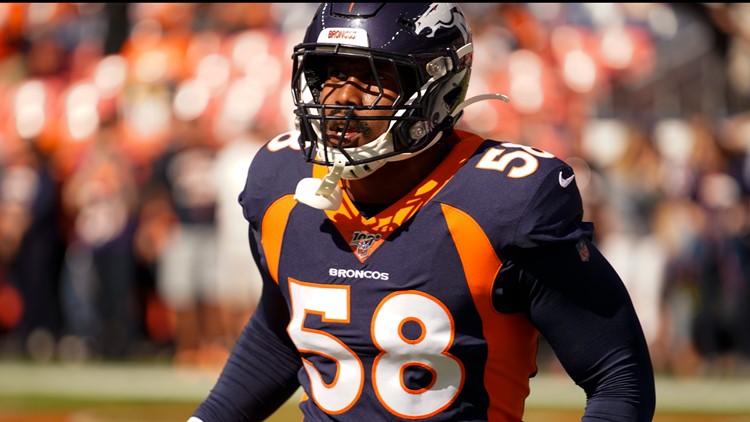 The 2015 Broncos not only won Super Bowl 50 on the strength of their quarterback-harassing pass rushers on the front end and No Fly Zone on the backend, but they also owned one of the best defensive units of the past 20 years. Put the 2015 Denver defense in the same company as the 2000 Ravens, 2002 Tampa Bay Bucs and, as Peyton Manning’s  Broncos knew all too well, the 2013 Seahawks.

9NEWS continues its Broncos All-Decade Team with a look at the defense.

Here are the top players at each defensive position over the past 10 years:

Comments: Williams had 6.0 sacks from the interior as a rookie in 2012, and 7.0 sacks through 12 games in this the final year of the decade. Yet, his best year was 2015 when he dominated not only against the run but opening up pass-rush lanes for Von Miller.

Malik Jackson, one of John Elway’s best-ever draft picks as a fifth-rounder in 2012, came on huge in his fourth and final season with the Broncos in 2015. He became a free agent after this season and got $45 million over three years from Jacksonville.

Shelby Harris became a durable tackle with a knack for the big play when he joined the Broncos on a futures contract in 2017.

Comment: Marshall first made his mark on the Broncos’ practice squad then became a 5-year starter as a three-down linebacker.

Trevathan nudged out Todd Davis and Wesley Woodyard for the starter spot. In fact, with Davis leading the Broncos in tackles three of the past four years and Woodyard, who was undrafted in 2008 still in the league with the Titans, a case can be made the backups are a stronger duo than the starters.

But when it doubt for this decade, the Super Bowl 50 defense rules.

Comments: Unquestionably the strength of the Broncos’ All-Decade defense comes from this position. The quality of the runners-up says that.

Miller, who was Elway’s first-ever draft pick in 2011, has 105.0 sacks with one game remaining in the decade. He utterly dominated the 2015 postseason, registering 2.5 sacks and an interception against Tom Brady in the AFC Championship Game and his two-strip sacks of Cam Newton that led to touchdowns in Super Bowl 50 made him the Big Game’s MVP.

Ware was never fully healthy in his three seasons with the Broncos, but he still had 21.5 sacks, not including his phenomenal 2015 postseason.

Against Big Ben and the Steelers in the first playoff game, Ware had a sack and hustling, game-turning fumble recovery. Against Brady, in the AFC Championship, he had 7 quarterbacks hits – 7! – plus a half-sack.

Ware also had 2.0 sacks of Cam’s Panthers in Super Bowl 50. Ware was the best locker room defensive leader of the decade.

Barrett spent a year on the Broncos’ practice squad, then had 14.0 sacks in four years as a back-up. He then moved on to Tampa Bay where he has 16.5 sacks in this his first year as a starter.

Comments: Talib had not one pick-six during his four years here. Not two, but SIX interception returns for touchdowns.

FILE - In this Jan. 12, 2014, file photo, Denver Broncos cornerback Champ Bailey (24) breaks off the line-of-scrimmage during the first quarter of an NFL AFC divisional playoff football game against the San Diego Chargers in Denver. Tony Gonzalez, Ed Reed, Champ Bailey and London Fletcher are first-year eligible players among the 102 modern-era nominees for the class of 2019 for the Pro Football Hall of Fame, announced Thursday, Sept. 13, 2018. (AP Photo/Jack Dempsey, File)
AP

Bailey is a Pro Football Hall of Famer but his best seasons came from the previous decade of the 2000s.

Comments: Ward was a dynamic player whose play in the box was an underrated factor to that great 2015 defense.

9NEWS is smarter than Pro Bowl voters. Simmons was such a good player the past four years, he nudged out an aging Brian Dawkins, plus Darian Stewart and Mike Adams.

Simmons is only four years into his career so he’s the youngest member of the Broncos’ All-Decade defense.

“It’s promising in terms of I know I haven’t hit my ceiling,” Simmons said. “Just excited to keep building and looking forward to what the future holds.”

He is expected to return for the early part of the next decade, even if it means hitting him with the franchise tag.

RELATED: Ja'Wuan James on knee injury: 'I’ve played through pain. This was my knee giving out on me'