The injury cost him 2 years of playing, 4 years as starter. But he started last year for Carolina and Broncos are giving him a chance to make it two years in a row. 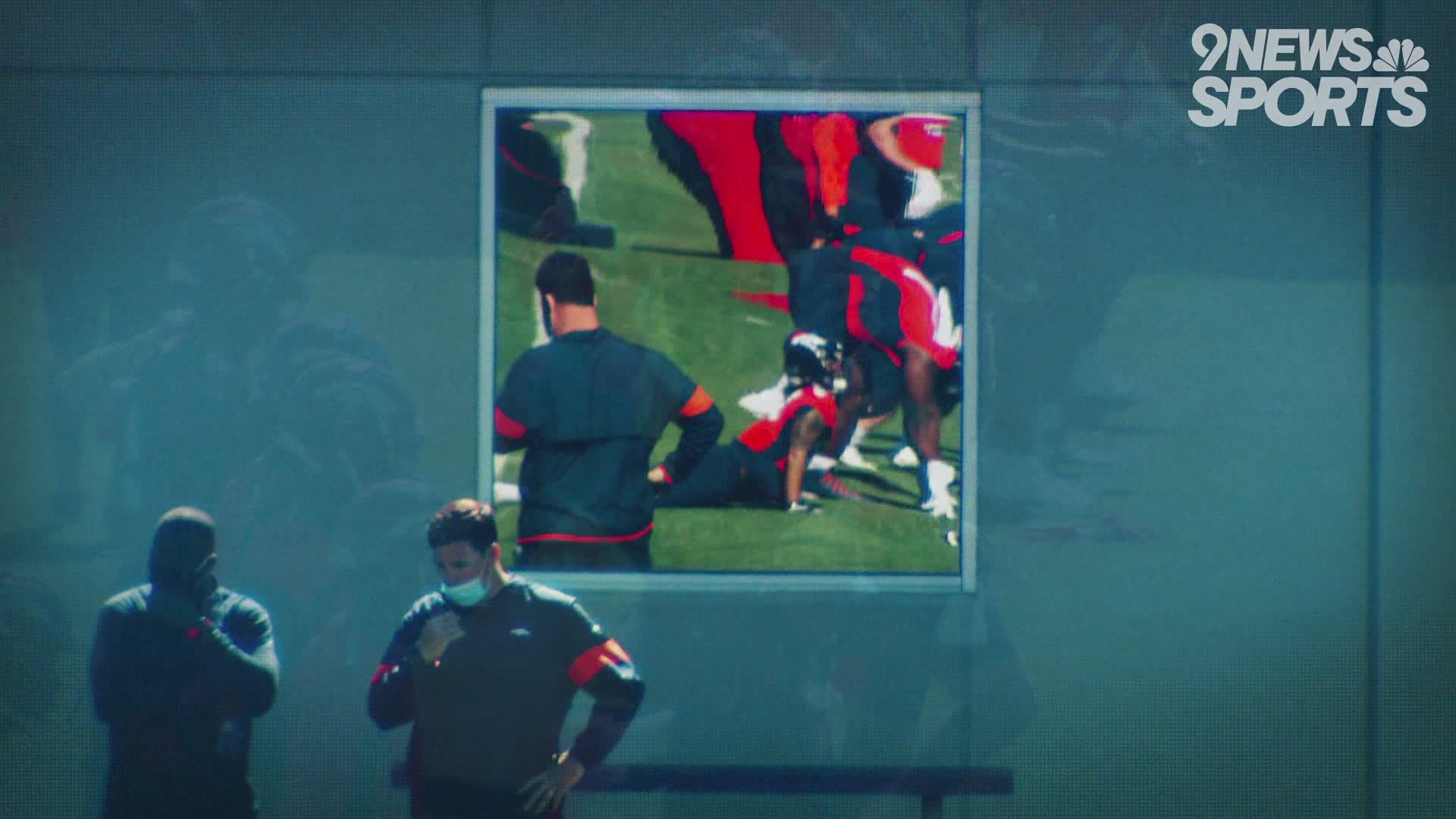 ENGLEWOOD, Colo. — Teddy Bridgewater dutifully sat in the chair, looked straight into the camera and got ready to make good TV.

Got to admit, five years ago? No way anyone thought five years later Bridgewater would be getting ready for an interview with 9NEWS following a minicamp practice as a Broncos quarterback.

"That’s the main reason that I smile every day," Bridgewater told the TV station’s interviewer. "That I have an opportunity to walk into the locker room, walk into this facility -- because (5 years ago) was a point when there was nothing but doubt. There was that cloud in my mind, cloud in those around me minds. Now to be where I am in Two thousand twenty one, I have but every reason to smile. It was a tough process getting back to playing but I had so many people in my corner that believed in me still and that was all the motivation that I needed."

Bridgewater and the Vikings’ starters had just finished their preseason and two days after third preseason game, they were going through preparations for their 2016 regular season opener. Led by Bridgewater in his first full year as a starter in 2015, the Vikings were coming off an 11-5 record that won the NFC North Division and had a first-round playoff win against Seattle in the bag until Blair Walsh missed a 27-yard field goal with 22 seconds left.

The following year, the Vikings were loaded and drawing Super Bowl expectations. It was August 30, 2016 and the team was going through an 11 on 11, no-pad, no-contact drill when Bridgewater was tripped up by another player’s cleat. As he tried to brace against the fall, Bridgewater put full weight with no give on his left knee. He suffered a dislocated knee that completely tore his ACL.

Initially, trainers feared greater damage but their immediate response methods were later lauded. He was placed in an air cast as the rest of practice was cancelled, the media was ushered off the field, and teammates alternately kneeled in prayer or spiked their helmets in disgust.

Bridgewater was extremely popular among his teammates – "Everybody loves Teddy," has been said hundreds, if not thousands of times in recent years. There was severe structural damage besides the completely torn ACL, but as it turned out there was no nerve or arterial damage.

The Vikings had no choice but to quickly move on. Five days later, they acquired Sam Bradford in a trade and started 5-0, although their season would unravel into 8-8.

Bridgewater, meanwhile, had an injury that not only forced him to miss the season but threatened his career.

Comeback inspiration came many, but one youngster in particular.

"One child came up to me back home and told me, ‘Hey man, I miss seeing you out there on the football field. Are you going to be back?’" Bridgewater said. "That’s enough to really motivate you. For me, I come from a really small corner of Miami, across the bridge from the beaches. Where there’s, you know, not much hope. I knew that when I was injured, I had to give my community some type of hope.

"That right there really lit my fire to try and get back on the field and really hit it hard."

Bridgewater missed all of 2016 and all but a couple mop-up plays in a late-season blowout win in 2017, the year of Case Keenum’s Minnesota Miracle.

In 2018, Bridgewater became a free agent, signed with the Jets, then was traded a couple months later to New Orleans where he spent two years as Drew Brees’ backup. When Bridgewater went 5-0 while filling in for an injured Brees in 2019, his agent Kennard McGuire had all he needed to get his client not only a starting job again, but a three-year, $63 million contract with Carolina.

When it became obvious the Panthers wanted to move on after one decent season from Bridgewater but disappointing 4-12 season overall, McGuire worked the back channels to help facilitate a trade to Denver where new general manager George Paton – who was the Vikings’ assistant GM during Bridgewater’s four years there – wanted competition for Drew Lock.

"Yeah my agent, he was adamant about (a trade somewhere)," Bridgewater said. "We had talked. We knew some transaction was going to take place this offseason and there were some familiar faces here in Denver from my time in Minnesota with George, with (offensive coordinator) Pat Shurmur. So we had a good feel for the vibe that was here. We played it one day at a time and when it finally happened we all looked at each other like, ‘We told you.’ I’m happy to be here and looking forward to what’s in store for me."

Bridgewater doesn’t have the strongest arm, especially when measured next to the fastballs Lock can regularly throw down the seam. But there are other quarterback intangibles Bridgewater brings to a still young Broncos’ offense. His leadership during the OTAs and minicamp was so evident in the way he frequently interacts with his teammates that it may be a more tangible characteristic than intangible.

It’s a leadership style he said came naturally at an early age.

"It developed in high school and it’s  been a part of me throughout my journey," Bridgewater said. "You might notice I also talk to the defensive players because those are the guys I’m playing chess with. If I can learn any tendencies from those guys about myself it’s going to make me a better player. And then if I can give them some information about what I see from them it’s going to make them a better player.

"In the end it’s all about making the team better. I love interacting with the guys and – even if it’s not about football. Joking with the guys on the sidelines, it’s getting to know a guy. Sometimes that’s all it takes to bring out the best in a player."

For all he’s been through – the devastating knee injury that could have been career-ending but wasn’t, from getting released to free agency by his first team, to getting traded to getting traded again – Bridgewater may just now be hitting his prime. He’s still only 28 and he’s had just two full seasons as a starter – 2015 and again in 2020. His best years may yet be ahead.

"I definitely feel that way," Bridgewater said. "I talked to a couple of my mentors this offseason, Sean Payton, Bill Parcells, and those guys broke things down for me and it made complete sense. I’m 28 years old and I’m feeling good and I’m ready to play my best football."

Across the bridge from the beaches in a small corner of Miami, Bridgewater has delivered on what he set out to do five years ago. He gave his community hope.

"To be where I am today, man, my community is proud of me, the ones who believe in me are proud of me, my former teammates who I’ve played with for years are proud of me," Bridgewater said. "So, I’m smiling every day that I come here."