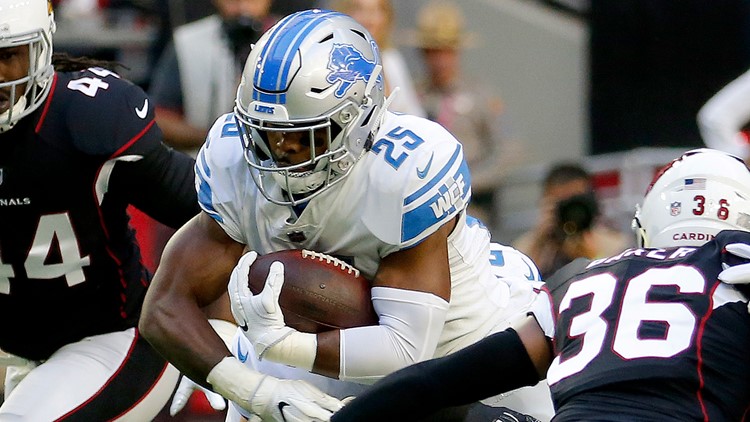 ENGLEWOOD, Colo. — Perhaps, Broncos followers were surprised when the team signed running back Theo Riddick on Friday. After all, they have a similar player in Devontae Booker.

Riddick, though, is exceptional, one of the league’s top receiving threats out of the backfield. He averaged better than 61 catches his previous four seasons with the Detroit Lions.

With a one-year, $2.5 million contract that includes $1 million in guarantees, Riddick is expected to join Phillip Lindsay and Royce Freeman as the Broncos’ running backs this season.

Once he hit the free-agent market last week, Riddick received calls from nearly 10 teams before ultimately picking the Broncos over the New Orleans Saints.

“Teams contact you and you try to find the best fit and Denver is it for me,’’ Riddick said Sunday after his first practice with the Broncos.

Detroit Lions running back Theo Riddick rushes during the first half of an NFL football game against the Philadelphia Eagles, Sunday, Oct. 9, 2016, in Detroit. (AP Photo/Duane Burleson)
AP

Why the fit here?

“Because they’re going to utilize my talents and my strengths,’’ he said. “I’ve got a lot of experience being in the game for six years. We’ve got a young room, very talented but hopefully I can help them out in terms of things they can see before it happens. You can only get that from experience.’’

Like so many NFL players, Riddick arrives with a chip on his shoulder. He was asked if he was blindsided by his release from the Lions a little more than a week ago.

In his first practice with the Broncos on Sunday morning, Riddick got some reps with the No. 1 offense, catching at least one pass from Joe Flacco.

“He’s been a good receiver,’’ said Broncos head coach Vic Fangio, who was previously defensive coordinator of the Chicago Bears. “I’ve seen him play the last four years in the same division and he had a couple good routes here today.’’

As for Booker, there is a chance the Broncos could keep four running backs – Lindsay, Freeman, Riddick and Booker – along with fullback Andy Janovich.

Or, if the Broncos need to keep an extra player at another position, Booker could become a trade candidate as the team begins to set its 53-man roster later this month.

Until then, there is still more than four weeks and four preseason games for the crowded running back situation to sort itself out.