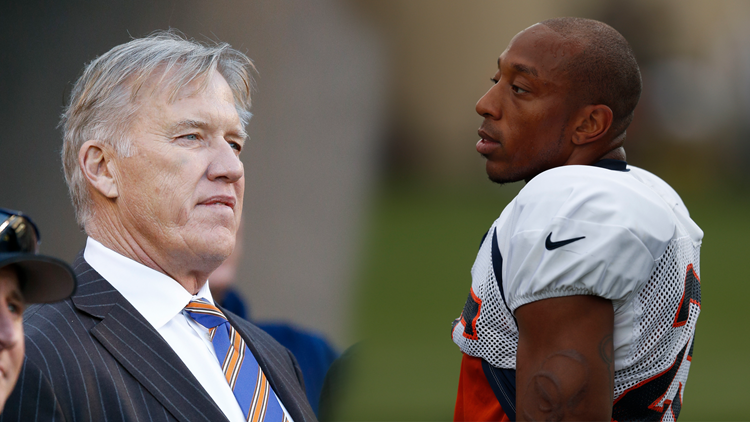 Progressed to where the situation now seems ominous.

John Elway, the Broncos’ general manager, has never backed down from a competition in his life – even if it’s competing over dollars with his own players.

Although Elway was able to reach settlements with previous Broncos contract holdouts Ryan Clady, Matt Prater, Demaryius Thomas and Von Miller, each of those players are low-key, peaceful souls.

There is a little more fire in Harris’ belly.

Harris has let it be known he’s not showing up to the Broncos’ offseason camp until he gets a new contract. And Elway sent a message to Harris during his pre-draft press conference Tuesday that he’ll deal with him when he’s good and ready.

“I don’t have time right now,’’ Elway said when asked about Harris’ contract situation. “I’m busy with the draft. We’ll talk about Chris. He’s under contract, so we’ll talk about that when the draft is over.’’

And then before he took the next question, Elway wanted to make one more point.

Harris received a $1 million option bonus in March and has $7.9 million in 2019 payout left on his contract. It’s safe to assume Harris would at least want more than the $11 million per year deal the Broncos gave Kareem Jackson last month. Jackson has no Pro Bowls to Harris’ four, and Jackson at 31 is one year older.

But Elway also values Jackson’s flexibility – he can play safety, corner and nickel. One problem: The Broncos only have about $11.5 million in cap space and less than that available in their cash budget.  To date, Elway is not planning on trading Harris as a means to resolving the issue.

“I haven’t even thought about that, so no,’’ Elway said. “We have not gotten there. Like I said, we’ll talk about Chris’ contract when the draft’s over and see what they’re looking for.”

Elway mostly skirted talk about individual players or positions of need, but he did admit he would be addressing the interior offensive line at some point in the draft.

“Yeah, I think we’re looking at it,’’ he said. “We have a lot of different combinations that we’re looking at. Obviously, with losing Matt (Paradis), we have some holes in there. We’re looking to try and do something there.”

Besides the center Paradis, the Broncos also lost guard-tackle Billy Turner to free agency. During their three-day minicamp last week, the Broncos lined up veteran Don Barclay at left guard, Connor McGovern at center and Sam Jones at right guard.

I’m hearing a few football folks – maybe not all, but some – inside Broncos’ headquarters consider Michigan’s Devin Bush a better inside linebacker than LSU’s Devin White.

Most mocksters have it the other way around.

“I’m not going to talk about each individual player, but obviously he’s had a great college career and played very well,’’ Elway said. “I’m going to leave it at that.”

It’s been clear during those war room shots in recent years that Matt Russell handles the mechanics of the Broncos’ draft.

Elway has called Russell, who officially carries the title of director of player of player personnel, his right-hand man.