New Broncos OC Pat Shurmur: 'I believe in everything we all know about the Broncos'

Broncos' offense again will have West Coast at its base. Only different. 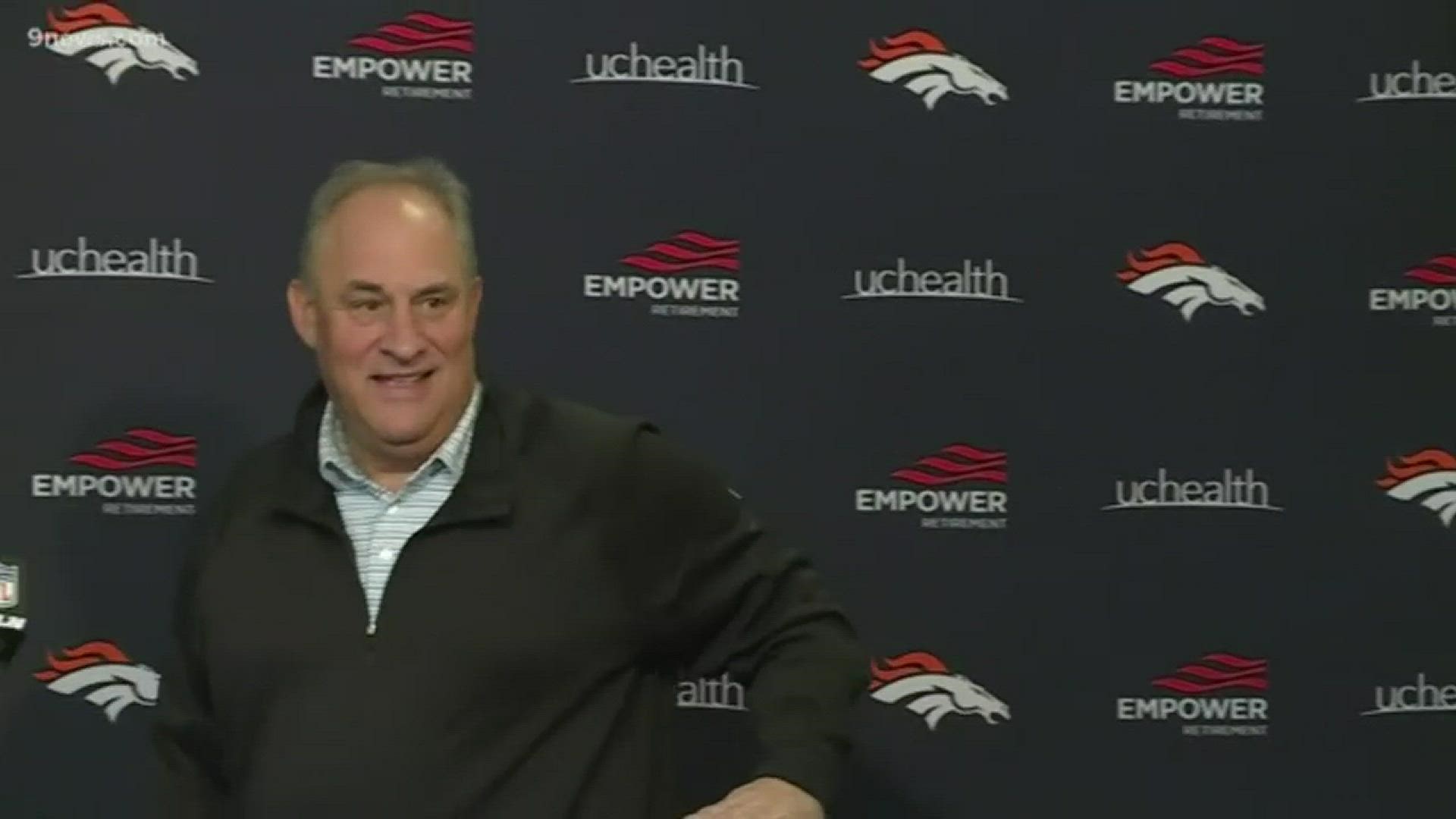 ENGLEWOOD, Colo. — Vic Fangio took a week or so after the season to think about it. His thoughts led him to change offensive play callers for the upcoming season in 2020.

The relatively inexperienced Rich Scangarello was out. The very experienced Pat Shurmur was in.

"It wasn’t so much a motivation to go with experience as it was to get who I thought would be the best guy for the job," Fangio said Thursday during a press conference that introduced Shurmur. "The experience was an extra crumb that Pat has. I think Pat is in his early 50s and has coached 20 years, but if he was in his early 40s and coached 10 years, he still would have been the right guy for the job."

Shurmur was formally introduced to Broncos Country on Thursday. Here’s a team that’s had three straight losing seasons yet had nearly 60 media people show up. Just in case you’re wondering if the Broncos still matter in this town.

Shurmur was aware of Broncomania which is one reason why he picked Denver instead of a couple other teams that offered him a job.

"I believe in everything that we all know about the Broncos," Shurmur said in a sit-down interview Thursday with 9NEWS. "It’s a winning organization. I believe in John Elway and his staff. I believe in coach Fangio and what he’s already started here. And I just wanted to come here and coach and, you know, maybe have a small piece in us winning football games."

At its core, the Shurmur offense will be similar to the offense the Broncos ran with Gary Kubiak in 2015-15, with Mike McCoy and Bill Musgrave in 2016-17, and with Scangarello last year.

"Our nomenclature, our terminology, is West Coast at its base," Shurmur said. "If you ask 10 people what the West Coast offense is you’d probably get 10 different definitions. But I think what’s most important is when we run the ball, we’ve got to do it effectively. Hopefully, you have players who can turn good ones into great ones and great ones into touchdowns. And then when you throw the ball you have to be able to do it efficiently and get some big plays out of it."

Shurmur then added the key to it all (besides the obvious of scoring).

Shurmur’s new quarterback is Drew Lock, who the Broncos took in the second round of last year’s draft. Shurmur was the New York Giants’ head coach last year and with the No. 6 overall pick in the draft, they took quarterback Daniel Jones.

Just because he took Jones instead of Lock doesn’t mean Shurmur has a problem with Lock. In fact, Shurmur was complimentary of his new QB when asked if he was confident he could win Lock in 2020.

"I am," Shurmur said. "I love his skillset. I love the fact he was able to play as a rookie. I love the fact he helped contribute to four wins in five starts. Those are all things we can build on. And having gone through the process last year when we were picking a quarterback, I came away from that having a very high opinion of Drew. And I’m really glad to be working with him."

"I just think Pat has got what it takes to be a successful offensive coordinator in this league and in particular for us," Fangio said. "Having coached against him a few times, getting to know him — when I say getting to know him, we really didn’t know each other that well other than a professional relationship the last few years. Once I decided to make the move, he was the first guy I called."

RELATED: Steve Atwater picks -- who else? -- Dennis Smith as Hall of Fame presenter