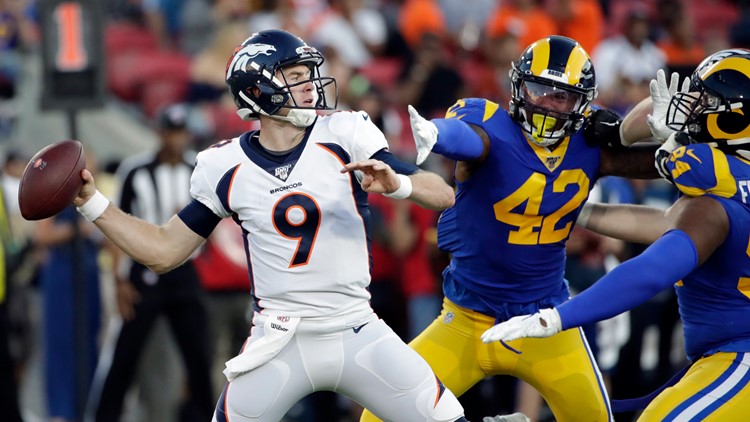 No. 2 QB spot still undecided as Broncos lose to Rams, 10-6, in preseason game

LOS ANGELES — If a No. 2 quarterback competition is all they gave the folks viewing at home, then No. 2 QB it will be.

With Broncos' rookie and future quarterback Drew Lock out a while with a thumb injury, it was veteran Kevin Hogan, undrafted rookie Brett Rypien and an unknown QB who will become available on the waiver wire next week competing for the Broncos' No. 2 quarterback job behind Joe Flacco,

Waiver Wire may notbe the No.2 QB to beat, but he's still in it.

Against a group of Los Angeles Rams' backups, Hogan and Rypien each had their moments but their total body of work will not prevent Broncos' general manager John Elway, his top assistant Matt Russell and head coach Vic Fangio from looking long and hard at the quarterbacks hitting the wire after teams cutdown their roster to 53 players next Saturday.

Doesn't mean they'll find a QB they all like from the scrap heap. But they'll look.

“We’ll see more,'' said Broncos head coach Vic Fangio of Hogan and Rypien. "We’ll play Brett some more this week and give him an opportunity. Play them both and make our decision.”

If there's a QB familar with the Rich Scangarello offensive system, the Broncos' No. 2 QB to open the season may not be on their roster.

“At the ttime I didn’t know whether I should jump in front of him,'' Bierria said. "In my mind I was like, I gotta cut this guy off and get in front of him but we wound up shoulder to shoulder and it came down to who wanted it more. Obviously, I wanted it a little more.’’

Alas for the Denver defense, touchdowns have been hard to come by for the Broncos' offense this preseason so it's only fitting they had to settle for two Brandon McManus field goals through three quarters.

“I thought we had a couple good drives,'' Hogan said. "The one that finished with a field goal would like to find a way to extend that and get in the end zone. That’s part of we’re running our base system. I felt like guys were making plays, playing with a lot of effort. We’lll find a way to tighten it up down there in the red zone and get it in the end zone.’’

"Kind of like it’s been all preseason,'' Fangio said. "Saw some good stuff, some that wasn’t as good. I thought our protection for the  most part was pretty good, gave our quarterback a chance to operate. Got to be more consistent, obviously. Six points isn’t enough.’’

Hogan completed two passes to tight end Jake Butt, who was playing for the first time since tearing his ACL during a practice prior to the Broncos’ fourth game last season.

“I mean 11 plays in the preseason I’m not going to say I’m back,'' Butt said. "I think it’s a step in the right direction. I feel good about what I did out there. I feel good coming out healthy. Cuaght a couple passes, blocked well. I think the tight ends in general played well.’’

With the Broncos not playing their top 25 players or so, their usual special teamers were starting. That means third stringers were playing special teamers and because their work wouldn’t help the Broncos for the regular season, McManus was asked to give touchbacks a try at sea level.

He came through on the opening kickoff, but on the Rams’ second play, Brandon Allen beat Broncos cornerback De’Vante Bausby for a 51-yard completion to Michael Thomas.

The Rams were quickly in the Broncos’ defensive red zone, but on third-and-1 from the 11, Denver’s D stiffened twice. DeMarcus Walker stopped Darrell Henderson for no gain and on fourth down, linebacker Justin Hollins dropped Henderson for a 2-yard loss.

Bierria's big play gave the Broncos a goal-line stop in the third quarter, but a fourth-and-goal, 4-yard touchdown pass from John Wolford to Jalen Green early in the fourth quarter gave L.A. the lead.

Rypien played well in his first drive, but struggled in the third quarter, throwing an interception and completing just 2 of 6 passes for 6 yards.

He bounced back in the fourth quarter, leading a long drive to the Rams' 26 yard line through some nice throws. Rypien completed 14 of 23 although for only 80 yards.

"He had his opportunities,'' Fangio said. "Made some nice throws. Not enough though. We’ve just got to be able to make some more.’’

Rypien seemed destined for the practice squad, but Lock's injury presented a new opportunity for the 53-man roster.

“I’m not really focused on that to be honest with you,'' Rypien said. "I think if I take the day to day mentality and approach ot everything, everything will kind of work itself out. I wanted to come out here and put some good film out there tonight and we’ll see when I go back and watch it but for the most part I thought it was pretty good.’’

The Broncos complete their preseason schedule Thursday night against the Arizona Cardinals at Broncos Stadium at Mile High. Cuts will start Friday and conclude at 2 p.m. Saturday when the Broncos must set their first, 53-man roster.