Former Broncos QB great was his usual good-natured self during stoppage on Hall of Fame parade route. 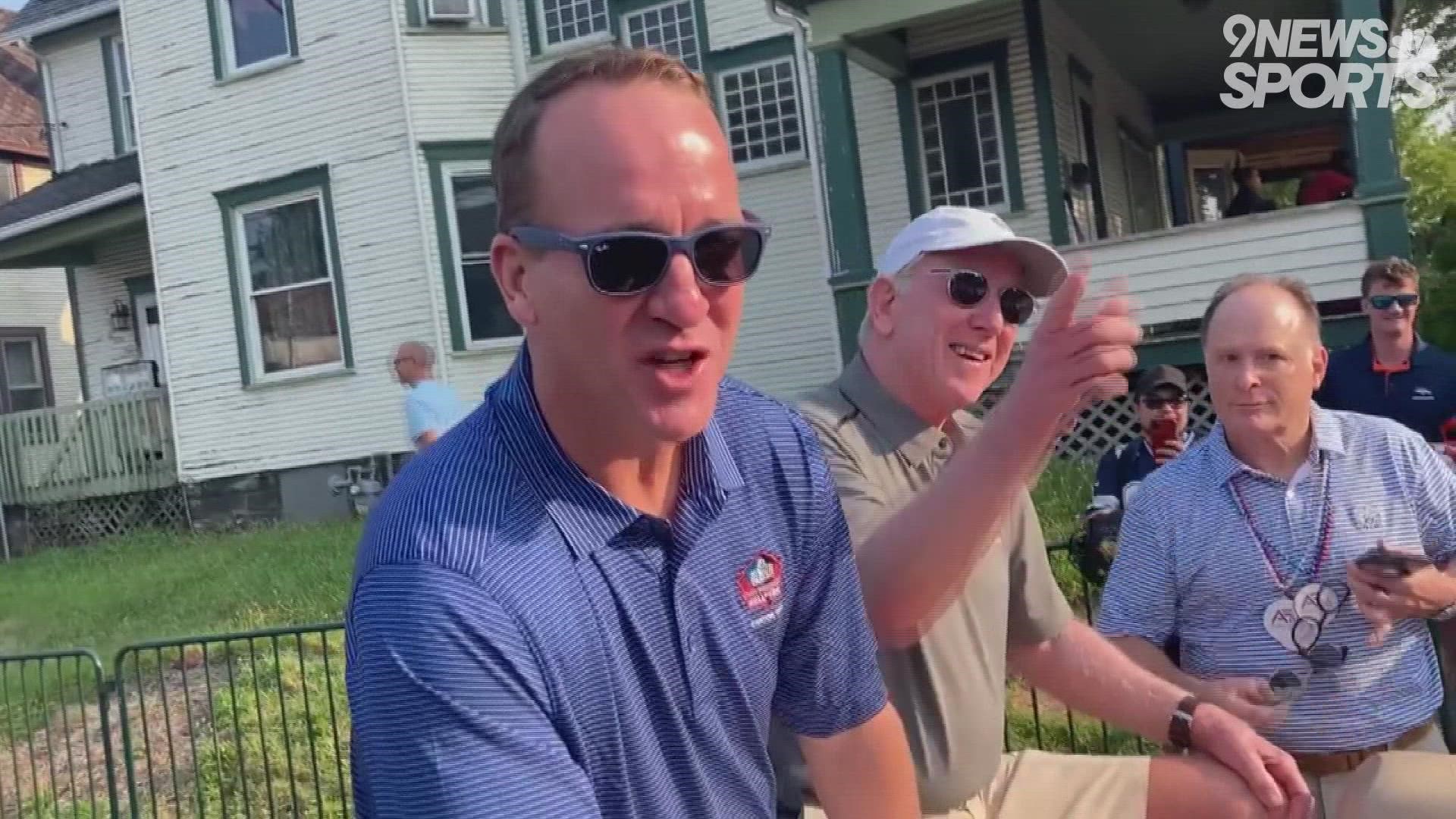 CANTON, Ohio — Around the corner came the dark reddish sporty convertible with Peyton Manning propped up on the back seat with his dad Archie Manning sitting next to him.

The Pro Football Hall of Fame Grand Parade had started about an hour before with the Mannings’ vehicle taking an unassuming middle position in the procession.

"Mardi Gras," Peyton said when asked the last time he had been to a parade. "Probably 10 years ago I got to ride in a parade. With Mardi Gras you get to wear a costume and a mask which I like. That’s not the case here so it’ll be a little different."

Perhaps, Manning’s reaching that point where yesteryear is more easily recalled than yesterday. The Super Bowl 50 parade in downtown Denver was held in February 2016. This was his second parade since he played the last game of his brilliant NFL career.

"That was a fun one," Manning said, his otherwise impressive memory properly jogged. "Lot of good memories on that float. Me and DeMarcus (Ware). Coach Kubiak and John (Elway). Had (his twin children) Marshall and Mobley with me. Good memories, thank you for reminding me."

In a 95-second interview with 9NEWS during a stoppage on his parade route, Manning was able to good-naturedly dish on his former teammate Brandon Stokley, Broncos head coach Vic Fangio and longtime QB rival, and friend, Tom Brady.

Manning had attended the Broncos’ training camp practice Wednesday at UCHealth Training, watching from side with Stokley.

"It was good. I was trying to watch it but Stokley was talking to me the whole time, I couldn’t concentrate," Manning said. "I didn’t see much. Good to see a few of the guys. Von and McManus are coming tomorrow for the ceremony. Coach Fangio is not real happy about that. Mad at me for inviting them but I’m honored they’re here. It was good to see Drew (Lock) and Teddy (Bridgewater) and George (Paton) so I’m looking forward to getting out there for the Rams preseason game and watching them. Glad they’re allowing fans this year, finally."

Fangio had jokingly appeared irritated Friday that edge rusher Von Miller and kicker Brandon McManus – who played prominent roles in leading the Broncos to that Super Bowl 50 win that finished Manning’s career – would not attend the team’s stadium practice Sunday at Empower Field at Mile High.

Besides his former teammates, Manning’s induction speech here Sunday will also include Brady in the audience.

Credit: AP
Peyton Manning, right, a member of the Pro Football Hall of Fame Class of 2021, embraces his father, Archie Manning, after receiving his gold jacket from his father during the gold jacket dinner in Canton, Ohio, Friday, Aug. 6, 2021. (AP Photo/Gene J. Puskar)

"Means a lot. Special," Manning said. "The fact he’s flying commercial up here and connecting through Charlotte and Cleveland, really shocking. But it means a lot."

Seeing so many Hall of Fame players this weekend did not make Manning – who despite his retirement for going on six years still must be the No. 1 endorsement and commercial pitchman in sports – long to play again.

"No, not really," he said. 'I got to do it for a long time and I was honored to do so. Enjoy seeing old teammates, Edgerrin James and Marvin Harrison here. No I’ve kind of gotten my fill in."

Caught up to Peyton Manning on HOF parade route. He dishes on Stokley, Fangio and Brady. #9sports pic.twitter.com/SZV45CGvhl