Peyton dishes on pranks, how he chose Denver during HOF roundtable chat

John Lynch also told story how Mike Shanahan recruited him to Denver while both families were vacationing in Hawaii. 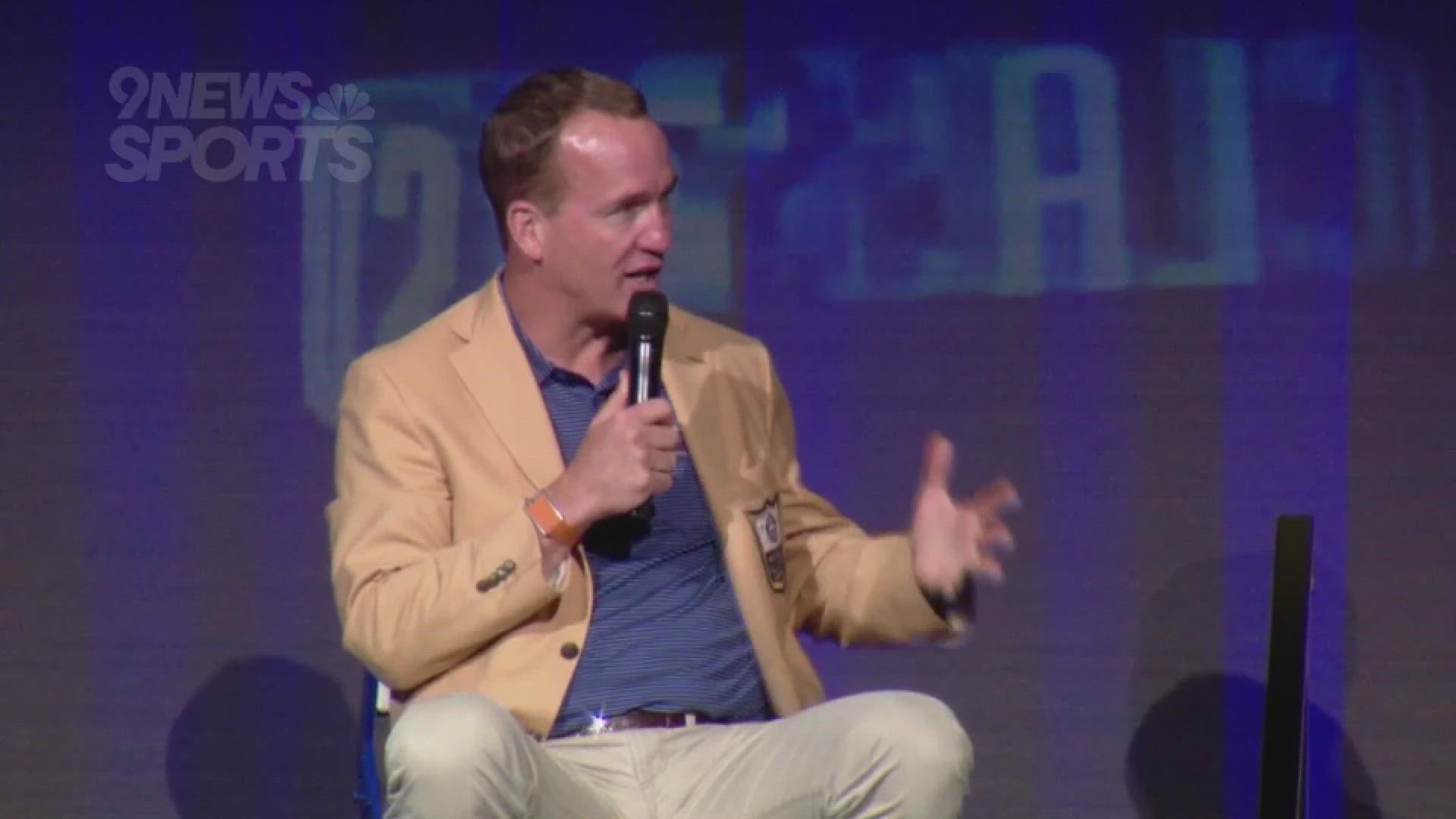 CANTON, Ohio — One problem with holding the Hall of Fame induction speeches to 8 minutes is there isn’t much time to say much past all the thank yous.

During the Hall of Fame enshrinees roundtable event Sunday afternoon at a crowded Canton Civic Center, Peyton Manning got to tell his story about his go-to prank that involves changing a player-victim’s cell phone to a foreign language.

And like many Peyton stories, he believes the setup is key to the punch line.

“I’m sure all these guys can relate: When you play football, training camp, the locker room, you better learn to have thick skin,’’ Manning said as he sat on stage while flanked by his fellow 2021 Hall of Fame classmates John Lynch, Charles Woodson, Drew Pearson, Calvin Johnson, Tom Flores and Alan Faneca. “Pranks or practical jokes were part of our culture in Indianapolis. Coach Dungy wanted us to work hard, he wanted us to enjoy ourselves, he wanted us to be good citizens of the community, but we had a special group.

“I used to work hard, I studied a lot of film. But I think if you don’t enjoy the journey and have some laughs and have some light-hearted moments, it wouldn’t have been as special. And it keeps the balance of the grind in training camp.’’

“Yeah, Eli kind of taught me that trick,’’ Manning said of his younger brother. “Eli is kind of a silent assassin’. You think he’s this sweet innocent kid – Eli can put your phone in German in 7 seconds. The beauty of it is it’s a four-step process. It’s “general, settings, language,’’ and you turn into Chinese, and once it’s into Chinese, you can’t figure out “settings, general, language.’’

The large crowd roared with laughter.

Manning and John Lynch are second-chapter Broncos who will be formally inducted into the Hall of Fame here tonight at Tom Benson Hall of Fame Stadium as members of the class of 2021. Another former Bronco, Steve Atwater, was inducted Saturday night with the class of 2020, whose ceremony was originally scheduled for last summer but was postponed a year because of the virus pandemic.

While Atwater was a first-round draft pick of the Broncos and played the first 10 of his 11 seasons in Denver, Manning and Lynch were stars elsewhere who later came to Denver for the final four seasons of their career. Manning, who spent 14 seasons with the Indianapolis Colts, and Lynch, who spent 11 years with Tampa Bay, were asked about their second stop with the Broncos.

“John actually played a big role in that,’’ Manning said about Lynch helping him choose the Broncos over the likes of Tennessee, San Francisco, Arizona and Seattle, among others during the free-agent period of 2012. “John was living in Denver at the time and he was part of the recruiting process. ‘Hey, come to Denver. I live here. We’ll hang out.”

"I sign with Denver, the next year he moves to San Diego.’’

“That’s what recruiters do, right? They tell ya what they’ve got to tell ya,’’ Manning said before turning serious. “My goal was to play with the team that drafted me my entire career. I think any player should have that goal. I got injured, things changed and got to go find a new place to play. And couldn’t have picked a better place than Denver.

“The nice thing about the Pro Football Hall of Fame is you go in as a human being and you can take whoever you want to take in there with you. Other sports, they actually make you pick a team. I go in as a New Orleans’ native, as a University of Tennessee grad, as an Indianapolis Colt and a Denver Bronco. Very proud of that.”

Lynch was on a family vacation in 2003 on the Big Island in Hawaii where Broncos coach Mike Shanahan and his wife Peggy also happened to be vacationing.

“He said, “We’d love to have ya,’’ said Lynch, who lived in Denver from 2004-13 and is now the 49ers’ general manager. “He made a great and real compelling argument as to why I should come to Denver. And I’m sure glad I did. It became a special part of our family’s life.

RELATED: Former Bronco safety John Lynch sends strong message to the country while wrapping up his Hall of Fame speech

"Even as you heard here from the Broncos fans, they are some of the best fans in our group.''

"And I loved it. Denver will always hold a special place in my heart,’’ Lynch said.

The Hall of Famers from 2020 and 2021 were each asked to name the one person who is not immortalized but should be. Former Pittsburgh receiver Hines Ward was the choice for Steelers’ Troy Polamalu, Bill Cowher, Alan Faneca and Lions’ receiver Calvin Johnson.

A couple hours later, Manning and Lynch, in that order, were to deliver their 8-minute Hall of Fame induction speeches. There won't be time to tell stories as thouroughly as they did earlier in the day at the roundtable event.