In an interview with 9NEWS, the Broncos' new starting QB discusses challenges of opening at the Giants on the 20th anniversary of 9-11. 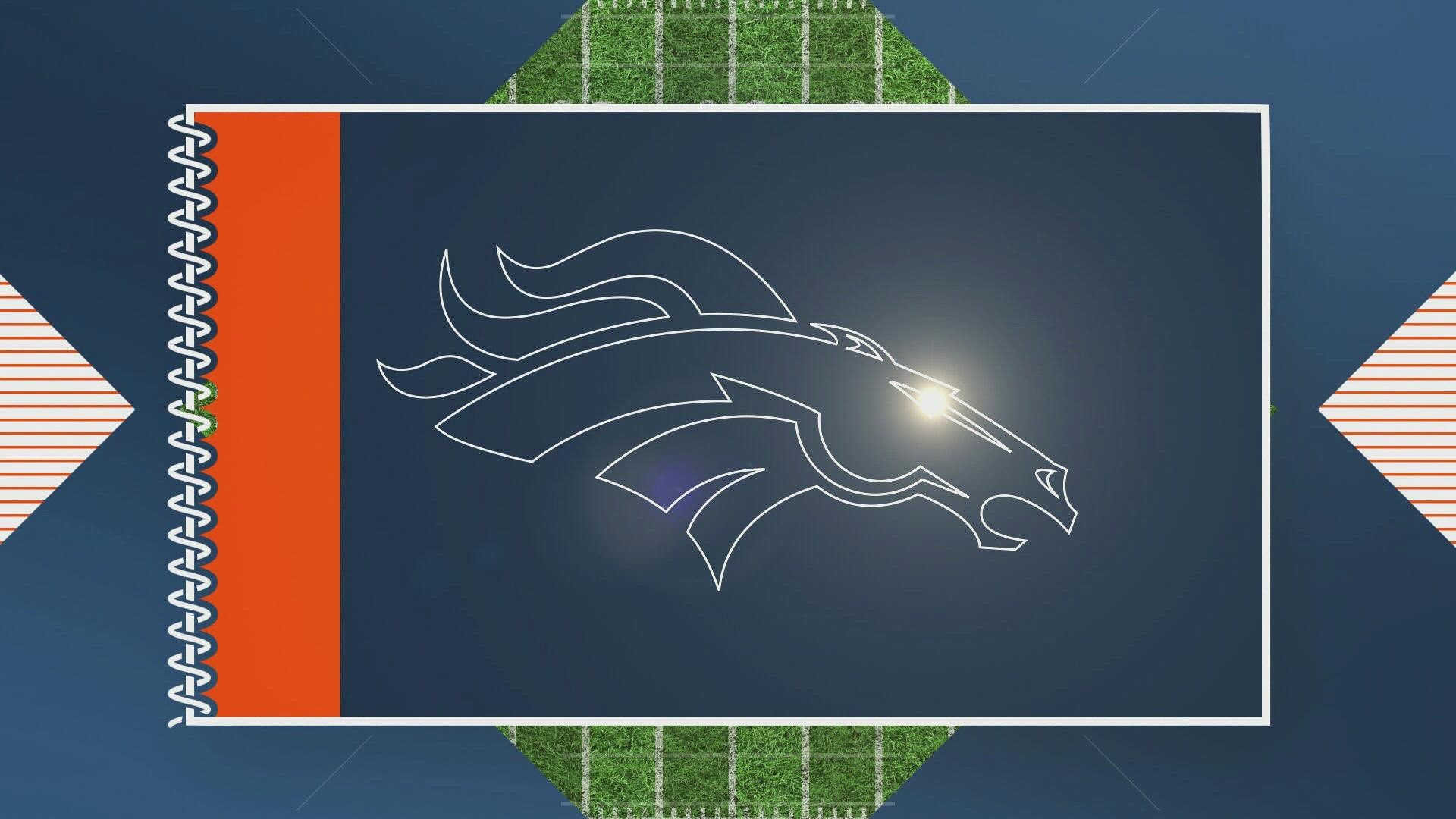 ENGLEWOOD, Colo. — It worked out pretty well the last time the Broncos had a quarterback wear gloves on both hands.

If Teddy Bridgewater turns out half as good as Peyton Manning, the Broncos should have a decent run with their new quarterback. Almost literally, half as good.

Manning wore two gloves because he needed a stronger grip after three neck surgeries left him with neurological issues. Bridgewater has a different story.

"I played wide receiver as well," Bridgewater said last week in a sit-down interview with 9NEWS. "In high school I played some wide receiver. There were times where in the middle of the drive, I might have to go to quarterback. I didn’t have time to throw the gloves off, I’d just go in and play quarterback with the gloves.

"And then when I got to the University of Louisville, I was a mid-year guy  -- I enrolled in January -- and it was very cold to me coming from south Florida. And we were throwing the type of football that wasn’t really suited for cold weather. So I decided to throw the gloves on and I started having success in the spring and I ran with it."

When Bridgewater lines up behind center Lloyd Cushenberry III next Sunday afternoon against the New York Giants’ defense at MetLife Stadium, he will be the first black quarterback in Broncos history to start the season opener. Marlin Briscoe was the NFL-AFL’s first black starting quarterback, period, in the modern-era when Marlin the Magician started Denver’s final five games of the 1968 season.

But as an example of the times, Briscoe was traded after that season to the Buffalo Bills, where he became the NFL’s second-leading receiver two years later.

"I heard about it but I don’t really watch much NFL Network or sports when they show the history of the game,' Bridgewater said. "I just remember watching from when I was 5 years old."

Jarious Jackson also started for the Broncos in the 16th game that had no playoff implications in 2003. And there was the Phillip Lindsay/Kendall Hinton emergency start last year after COVID-19 took out the Broncos’ entire quarterback room. Otherwise, that’s it for starting black quarterbacks in Broncos history. Bridgewater will be the first No. 1 on Day 1.

RELATED: Bridgewater on winning the QB job: 'I'm happy I get another opportunity'

"It’s a huge honor," Bridgewater said. "And hopefully this is one of those deals where I can serve as motivation to the next Teddy Bridgewater or the next black quarterback who has a dream of playing in the NFL. It’s one of those deals where you don’t want to get emotionally attached or thinking more about that than the game. I’m so grateful for this opportunity that I get to lead this franchise and organization. I’m going to make sure that I’m making my teammates proud and organization proud and my family proud."

It was Bridgewater’s training camp/preseason performance during Minnesota week last month that allowed him to prevail in his Great Quarterback Competition with Drew Lock. Broncos coach Vic Fangio said the two joint practices with the Vikings were as much a determining factor in deciding his starting quarterback as the first two preseason games. The joint practices pitted No. 1 offense against the No. 1 Vikings defense. The preseason games matched the Broncos’ No. 1 offense against backups and third-stringers.

Bridgewater clearly won the first joint practice against the Vikings as he threw a touchdown pass to Jerry Jeudy on his final move-the-ball drill while Lock’s series ended with an interception. Bridgewater wasn’t as effective during the next day’s joint practice, throwing two interceptions to an underneath linebacker during red-zone drills, but he did make a deep touchdown throw to KJ Hamler.

Where Bridgewater might have won it was his performance coming off the bench in the August 14 preseason game against the Vikings. Lock was sensational while playing with six offensive starters against 10 Vikings backup defenders. He threw an 80-yard touchdown pass to Hamler. He threw another touchdown pass to Trinity Benson. He had a touchdown called back on another drive.

Had Bridgewater been caught up mentally and emotionally in the QB competition, he would have realized he was in trouble. He would have trotted out midway through the second quarter with the No. 2 and 3 offensive unit buried beneath Lock’s sublime performance. But Bridgewater was seemingly oblivious. He came out and calmly directed the Broncos to a touchdown and a field goal in his two drives. The field goal came after his 12-yard touchdown scramble was called back by penalty. He completed 7 of 8 with his own touchdown throw to Benson.

It was the type of unflappable performance a team wants from its starting quarterback.

"It was one of those deals where honestly I was rooting for Drew," Bridgewater said. "I’m selfless. Whatever’s going to help this team have success, I’m all for. At the end of the day, I’m part of something that’s bigger than me. So now when Drew is having success against the Vikings, I’m like, ’Hey, let’s go.’ When I’m on the sideline, I’m like, hey, whatever’s going to happen will happen. I can only control my mindset. And my mindset going into that game was, try to score points.

Credit: AP
Minnesota Vikings quarterback Teddy Bridgewater is taken off the field on a cart after getting injured during the second half of an NFL football game against the Atlanta Falcons, Sunday, Sept. 28, 2014, in Minneapolis. (AP Photo/Jim Mone)

As a high school sophomore in Miami, Bridgewater and his two gloves led Northwestern to the Class 6A state championship game. He became a highly-rated, dual-threat quarterback recruit and -- in part because he enrolled for the January 2011 semester -- became Louisville’s starting quarterback that fall as a freshman. He put up huge stats as a sophomore and junior, combining for 58 touchdown passes and nearly 7,700 yards while throwing just 12 interceptions, then entered the draft.

The Vikings, with assistant general manager George Paton leading much of the draft preparation, traded back into the first round of the 2014 NFL Draft to take Bridgewater with the No. 32 overall pick. By game 4 he was the Vikings starter and he led them to the NFC North Division title in 2015. Despite below-zero temperatures (-25 windchill), he directed what should have been a final-minute, game-winning scoring drive in a first-round playoff game against Seattle but on fourth and 1 at the Seattle 9 and 26 seconds left, coach Mike Zimmer called for a field goal. Blair Walsh missed from 27.

The next summer, after the 53-man roster was set, Bridgewater suffered a torn ACL in practice that brought initial fears of whether he would ever play again. He didn’t play for two seasons. Then, Jets’ head coach Todd Bowles gave him a chance for the preseason of 2018. After that preseason, Bridgewater was traded to New Orleans where he served as backup to eventual, first-ballot Hall of Famer Drew Brees. Bridgewater went 5-0 in 2019 while filling in for the injured Brees.

That led to a nice contract and full-time starting role with the Carolina Panthers in 2020 but that year went so bad with an inexperienced NFL coaching staff that it brought questions as to whether Bridgewater can become a top 15 quarterback again.

Just don’t call this a crossroads season for Bridgewater. Von Miller and Courtland Sutton may be at the crossroads because they are coming off season-missing injuries. But Bridgewater harbors no such sweat.

"After everything I’ve gone through in my career, it’s a blessing to just wake up and still play the game that I love for a living," Bridgewater said. "It was once taken away from me and it could’ve been taken forever. So now when I come here, you know I was already counted out. Now, I’m free. I’m free of what I’ve been going through. I’m free of what my family may be going through, how I feel outside football. Once I step foot in between the football lines for those three hours that we’re playing or practicing, there are no problems in the world. This is when I’m at peace."

After Bridgewater’s backup performance against the Vikings prevented Lock from running away with the Great Quarterback Competition, Teddy Two Gloves won it the next week. The starter this time, and accompanied by the No. 1 offensive unit against Seattle, Bridgewater shredded the Seahawks for 14 points in two drives. When Lock wasn’t nearly as effective coming off the bench, the choice was clear.

Bridgewater’s first start against the New York Giants won’t be easy, even if the Broncos are now listed as 3-point road favorites. While the Broncos have the highest-paid defensive secondary payroll, the Giants are second. James Bradberry, Adoree’ Jackson (who will be questionable with an ankle sprain), Jabrill Peppers and Logan Ryan give the Giants a very good secondary.

"Yeah, they do," Bridgewater said. "Bradbury, I was able to see him when I was in Minnesota. He’s a long rangy guy. He’s one of the best corners in this league the way he’s able to play man coverage. It’s a roster that’s young, they have some youth as well, but they have some experience."

The Broncos will also be going into a potentially emotionally-filled venue as the city of New York and its surrounding area will be honoring the 20th anniversary of 9-11. Bridgewater was 8 years old when coordinated terrorist attacks on the World Trade Center and elsewhere took the lives of nearly 3,000 people.

"I just remember being in school that day and all the teachers turned on the television and everyone was sad," Bridgewater said. "And when you’re 8 years old you don’t really understand to what magnitude or to what extent how seriously it was. And as I got older, I learned more and more about how tragic it was."

In Bridgewater, the Broncos have a quarterback who will not get up in all the home-crowd emotion.

"We’re definitely aware of that," he said. "We just want to make sure we focus on what’s important and that’s to go there to try and win a football game. We understand there’s going to be a lot more with it being the 20th anniversary of 9-11. We want to pay our respects and pay homage to the victims and the city of New York and to the families who were affected.

Credit: AP
Teddy Bridgewater of the Denver Broncos smiles during the game against the Los Angeles Rams in the first half of an NFL preseason football game Saturday, Aug. 28, 2021, in Denver. (AP Photo/Bart Young)