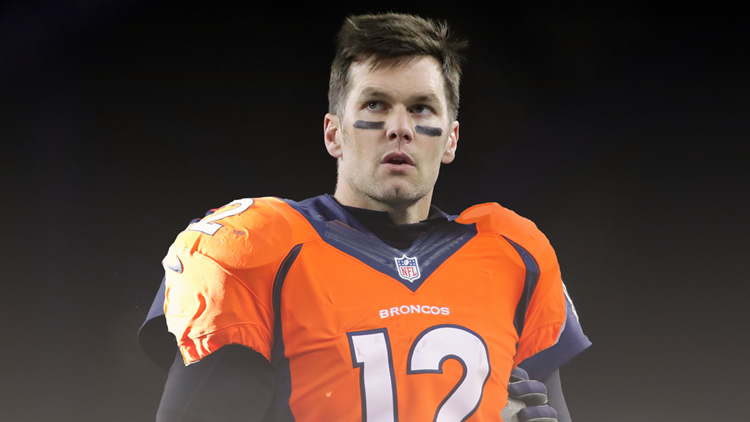 Photo by: AP Images
This is what it looks like when you paste a Broncos jersey on a photo of Tom Brady.

DENVER — If you logged into Facebook and were immediately … disturbed by a certain Photoshop job by 9NEWS Digital Producer Alex Kirk, you weren’t alone.

The question: With free agent Tom Brady potentially on the market, how would you feel about him in a Denver Broncos uniform?

For many, hating Tom Brady is as much of a Colorado trait as loving craft beer or complaining about transplants (even if you are one).

And this potential New England transplant generated a lot of feelings … in the form of more than 1,500 comments as of this writing.

RELATED: Look back on how Elway settled on Lock as his QB

As you can imagine, many folks just couldn’t put aside Brady’s affiliation with what many consider to be an evil empire.

“Why would a classy team like the Denver Broncos want a cheater like Tom (crybaby) Brady?” Vicki Diane Elder wrote, in part.

“NEVER!” L’Dena Pereira said. “Not in Denver! We deserve a lot better than CRY BABY BRADY!”

Lari Anderson summed it up succinctly.

“I love my Broncos but if Tom Brady becomes a Bronco, well let’s just say I’ll have a lot of stuff for sale,” her comment read.

“I’d like to see him in a Broncos uniform the same way I’d like a chainsaw through my forehead,” he wrote.

Of course, Brady does have a reputation for winning Super Bowls. And some Broncos fans wouldn’t mind setting their feelings aside if it means another championship run.

“I don’t understand most of you commenting,” Zack Turner wrote. “We’re talking about Tom Brady. We took broken Peyton Manning on and won a SB. If you paid attention this season you would know Brady is playing some great ball, look at their ending record. I personally see he has another 2-4 years left.”

“I don’t at the moment, but if Tom Brady starting winning a bunch of Super Bowls for the Denver Broncos, my opinion of him could change real quickly,” Sean Jamison commented.

Of course, there’s another factor at play here: the fact many fans consider Drew Lock the quarterback of the future.

“No, Drew is going to be great for the Broncos,” Terry Kenkel wrote. “The era of a pocket passer like Tom is gone.”

And maybe this answer from Missaliss Ann sums up how Denver feels about this whole thing best:

“We don’t want sloppy seconds from the Patriots!” she wrote. “We got lucky with Peyton Manning but that’s because he’s one of a kind!!!”

Have you not shared your feelings about Tom Brady in a Broncos uniform? Weigh in below: