Mark Rypien on Brett's NFL's starting debut: "He’ll get his guys in and out of the huddle. He’ll make his checks at the line of scrimmage with his offensive line.'' 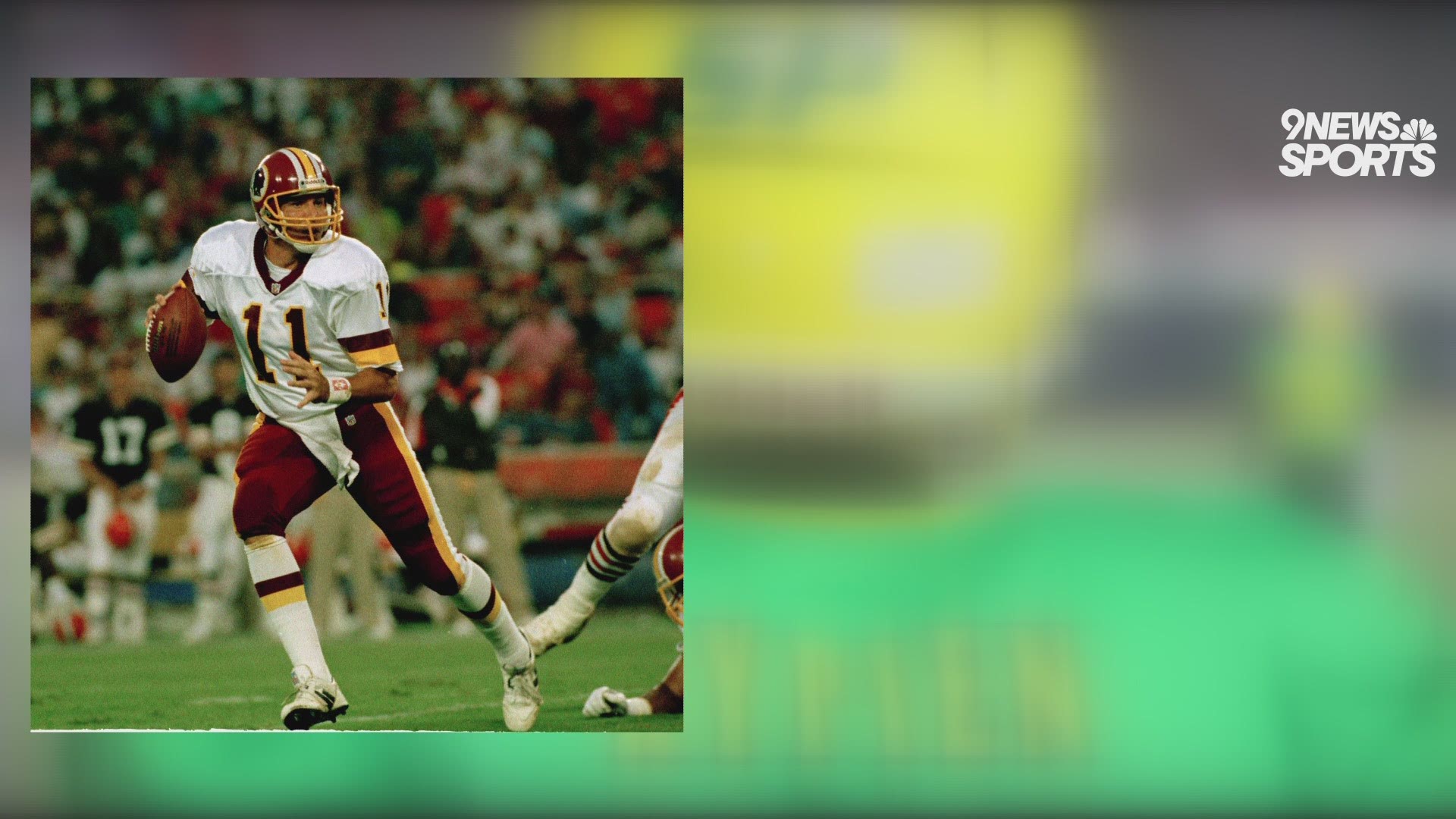 DENVER — Mark Rypien, uncle of Broncos quarterback Brett Rypien, had some time to talk about his nephew's first start.

Not much time, mind you. Mark Rypien, the former Washington quarterback and Super Bowl MVP, was on his way from his hometown in Spokane, Washington, to a charity golf tournament in Baltimore. The layover, as it so happened, was at Denver International Airport.

So tell us, how did uncle Mark help the Broncos newest starting quarterback as he was growing up in Spokane?

“Uncle Mark, when it comes to coaching and being right there gets a little bit too involved,’’ Mark Rypien said with a smile during a Zoom call with 9News. “One thing I would do before he got into the Xs and Os with his high school team was to get him the proper mechanics. I wanted to get him before he started, at least in his 7th or 8th grade here, at least proper mechanics so he was ready to play in high school and he had the right gait to do so.

“And then the rest was predominantly his coaches, and his dad and Brett just working extensively on his mechanics.’’

Brett went to the same high school, Shadle Park, as his dad Tim – who reached Triple-A as a professional baseball player – and his uncle Mark. Brett was a four-year starter who set all the state high school passing records previously held by Kellen Moore. Then Brett went to Boise State where he was a four-year starter and broke all of Kellen Moore’s school passing records.

“The IT factor when it came to sports is he just loved to compete, watching him as a young kid,’’ Mark Rypien said. “He did everything. His dad being a professional baseball player, so it was really since he was 2, 3 years old, Brett’s had a baseball glove in his hand.

“Played hockey. As a matter of fact a lot of his coaches who he played hockey for said he had a chance to go to the next level there. Good athlete, fun kid to be around.

“Through high school he loved the game of football. Got better and better at it. The game has changed since I played. It’s a wide open game. At Shadle Park, they threw the ball quick and fast, got it out of Brett’s hands. He made some plays and made others around him better players. So you could see starting in his sophomore and junior years where he was getting pretty good.’’

Getting rid of the ball quick is perhaps the reason why Rypien is getting his chance against the Jets. Jeff Driskel, the Broncos’ first backup quarterback used in place of the injured Drew Lock, played well when he had time but he took 11 sacks in roughly 6 quarters of play. Rypien went 8 of 8 for 53 yards in his first and only series Sunday against Tampa Bay. It was zip, zip, zip. His 6-minute drive, alas, ended with a fourth down interception in the end zone.

Against the Jets and heavy blitzing defensive coordinator Gregg Williams, Broncos coach Vic Fangio believed the quick-thinking Rypien gave his team the best chance to win in a battle of 0-3 teams.

“When you’ve got some injuries along your offensive line, and you’ve got some young guys playing, the one thing that’s important for your offensive coordinator is to put in things that are quick-hitting things, get a guy in a rhythm early and then get comfortable in the game and have a running game that complements it, then being able to do some things off of it,’’ Mark Rypien said while unintentionally (or maybe not) sending a message to Broncos’ offensive coordinator Pat Shurmur. “Brett’s always been very cerebral. Always thrown the bubble screen well down in Boise State, get the ball out of his hand early, making decisions early -- One, two, get the ball out.

“Understand, too, when you get down inside the red area that’s a critical point. It’s more important there than anywhere else on the football field that you have to make quick decisions or throw the ball away and live to fight another day.”

Despite Brett Rypien’s remarkable production and success at Boise State, he went undrafted. Not enough arm strength. Played in the Mountain West Conference that too easily fills up the scoreboard – even though the conference did a nice job producing the QB likes of Derek Carr and Josh Allen.

As a highly sought-after undrafted free agent, Rypien picked the Broncos in part because he hit it off with the team’s new offensive coordinator Rich Scangarello at the NFL Combine. When Scangarello was let go, Rypien stayed with the Broncos even though he had other practice squad opportunities.

He was asked if he got discouraged through his rookie year and a couple weeks into his second season that he wasn’t getting his shot. Brett said, no, and gave the example of how his uncle Mark started his career.

“He sat his first two years on IR,’’ Brett said in his starting QB weekly press conference Tuesday. “Having conversations with him and seeing the way he overcame adversity throughout his first two years and then being able to win a Super Bowl and be a starter for 15 years. I don’t think I ever lost hope or got discouraged. I’ve just tried to get better.”

Mark Rypien laughed when asked to recall the “knee and back” injuries that put him on IR in 1986-87. He wasn’t really injured. It was commonplace around the league then to stash young players on IR so they could develop mentally and physically before sending them out there on NFL Sundays.

“I’ll be honest with you, watching on the sidelines I thought the game was too quick,’’ Mark recalled. “I was like, “I hope I never have to play.” I’m sitting here collecting a check on IR. But lo and behold, Doug Williams had an emergency appendectomy. Much like Brett, on a Monday night, coach Gibbs called me and said you’re the guy. We’re going with you this week. I want you to be ready and I’ll see you tomorrow.’’

So how does uncle Mark think his nephew will do against the Jets?

Credit: AP Photo/David Zalubowski
Denver Broncos quarterback Brett Rypien throws a pass during the second half of an NFL football game against the Tampa Bay Buccaneers, Sunday, Sept. 27, 2020, in Denver.

“That’s a seasoned veteran thing, a guy three, four years down the road. They’ve got that in him right now. That’s what I’ll be concerned about and look at for the most part, the offside penalties, delay of game, things like that. That will show whether or not he is or is not in sync. He’s prepared for this and he’s ready for this. He’ll do just fine and hopefully help the Denver Broncos to their first win.’’

It worked out well for uncle Mark. The charity golf tournament in Baltimore is where his oldest daughter lives. He’ll watch Brett’s starting debut from his daughter’s home.

“In the little time he had with COVID, he showed his coaches that “I can rely on this guy if in a pinch,’’ Mark said. “Well they’re in a pinch right now so we’ll see. He’s always answered the bell and that’s why I’m proud of him and really look forward to him going out there and doing well.’’