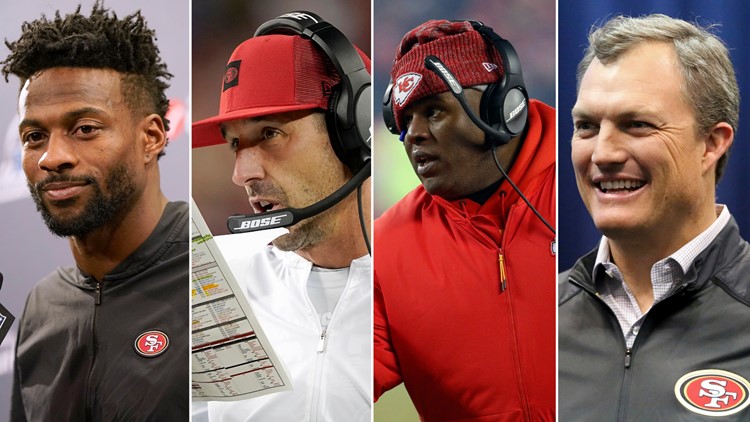 DENVER — Any one who watched the San Francisco 49ers dominate the Broncos during joint practices held at UCHealth Training Center in August and the Kansas City Chiefs clobber the Broncos by a combined 53-9 in two regular season games knows Denver was a long ways from Super Bowl-caliber in 2019.

However, there are many strong local ties with Super Bowl LIV, especially with the 49ers.

A look at the Denver-Colorado-Broncos connections to Super Bowl LIV that will be played February 2 in Miami:

A Broncos’ fan favorite from the time he was signed to a three-year, $15 million contract from free agency in 2014 until he was dealt, along with a fifth-round draft pick, at the trading deadline October 22 to the 49ers in return for third- and fourth-round draft selections.

But “wide receiver heaven” as Sanders deemed the Broncos at his Denver introductory press conference became pass-catching purgatory after Peyton Manning retired following the Broncos’ Super Bowl 50 season of 2015 and his replacement Trevor Siemian suffered his second shoulder injury in 2017.

As a coach’s kid, Kyle lived in the Denver area from the time he was 4 to 8-years old, again from 10 to 12-years  old, and finally from 15 years old until he was 23 when he became a graduate coaching assistant for Karl Dorrell at UCLA. He attended Cherry Creek, which won the Class 5A state football championships in his sophomore (1995) and junior (1996) years.

Kyle held the cords to his father’s headsets on game days during his senior fall season of 1997, when dad Mike Shanahan coached the Broncos to their first Super Bowl title.

Kyle was about to become the Texas Longhorns’ No. 3 receiver as a junior in 2001, when just prior to training camp he impaled his thigh while trying to jump over his parents’ backyard fence during what was supposed to be a dog walk.

A four-year Pro Bowl safety for the Broncos from 2004-07, Lynch and his family stayed in the Denver-area until he took the 49ers job in 2017.

One of the NFL’s best stories, no team, not even the Broncos, thought Garland was a pro prospect after his four-year career as a defensive lineman for the Air Force Falcons ended following the 2009 season.

The Broncos signed Garland, who grew up in Grand Junction, as an undrafted rookie essentially as a nice PR move in 2010. He then served his two-year military commitment, before he was signed to the Broncos’ practice squads as a guard in 2012 and 2013.

Rewarded for his hustle and practice determination in 2014, he played in that season’s final eight games, mostly as a special teamer, but then was released prior to the setting of the 2015 season-opening roster.

He caught on with the Falcons’ practice squad in 2015, played some defensive tackle and guard in 2016, and started three games at guard for offensive coordinator Kyle Shanahan in 2017.

He followed Shanahan to the 49ers last spring and replaced the injured Weston Richburg as their starting center in week 15.

Garland will be the 49ers’ starting center in Super Bowl LIV.

Ben Garland during the first half of an NFL football game against the Arizona Cardinals, Thursday, Oct. 31, 2019, in Glendale, Ariz.
AP Photo/Rick Scuteri

Served 15 years in the same position for the Broncos during their zone-block/one-cut rushing heyday – the first 14 seasons under head coach Mike Shanahan.

He is the father-in-law of former Broncos’ offensive lineman Orlando Franklin.

In 2013, when the Broncos became the most prolific offense in NFL history, Welker had 73 catches for 778 yards and 10 touchdowns. He added 49 more catches during a concussion-plagued 2014 season.

His father, John Embree, played two years for the Broncos in 1969-‘70. Jon Embree played at Cherry Creek High School before becoming a four-year tight end for the Colorado Buffaloes (1983-86).

Coached one year for Douglas County High School and 13 years in a variety of roles for his college alma mater in Boulder over three different stints, including as head coach in 2011-12, when he posted a 4-21 record.

In a rarity if not a Super Bowl first, Embree has sons coaching with both teams -- Taylor Embree is an offensive quality control coach for the 49ers and Connor is a defensive assistant for the Chiefs.

He was the Broncos’ secondary coach for the famed “No Fly Zone” in 2015-16, then became the team’s defensive coordinator under Vance Joseph in 2017-18.

Did you see the 49ers run the ball in their two playoff games? Mike Munchak has some work to do to regain his mantle as the NFL's top offensive line coach. Bention grew up in Durango and was a four-year starting offensive lineman for Leon Fuller at Colorado State. Also was a long-time offensive line coach and offensive coordinator for  Sonny Lubick at CSU.

Grew up in Greeley as a Broncos fan and is a former Broncos ball boy. He got his coaching start as a Broncos' intern in 2005, when Denver went 13-3 and reached the AFC Championship Game.

A four-year starting center at Colorado State, where he helped former Broncos’ running back Kapri Bibbs and quarterback Garrett Grayson set school records. Richburg started the first 13 games for the 49ers this year until he suffered a season-ending torn patellar injury.

Played three seasons at the University of Colorado, the final two as a starter. He had been 49ers’ starting cornerback this season until he was benched in their second-playoff game against the Vikings. He only played special teams in the NFC Championship Game on Sunday against Green Bay.

What Matt Russell is to the Broncos’ John Elway, Peters is to the 49ers’ Lynch. Peters and Martin Mayhew share the VP of personnel title.

The "Greek" of the 49ers, he mentored six seasons under Steve Antonopulos with the Broncos from 2013 until he was hired away by the 49ers a year ago.

Son of Bob Slowik, who was the Broncos’ secondary coach and defensive coordinator from 2005-08.

Jon’s son, Taylor grew up in Denver, although he finished high school in Overland Park, Kansas.

RELATED: When is Super Bowl 2020: Date, time, performers and more

A four-year running back for Bill McCartney and the CU Buffs, he rushed 1,628 yards and 17 touchdowns during the school’s co-national championship season of 1990.

Patrick Mahomes listens to offensive coordinator Eric Bieniemy, right, as he warms up for the team's NFL football game against the New England Patriots in Foxborough, Mass.
AP

Grew up in Aurora and starred at Grandview High School, he played his final college season of 2013 at CSU-Pueblo.

Born in Superior and spent much of his youth in the Boulder-area during a time when his father Jon Embree was a CU assistant coach. Yes, Jon Embree has sons on both teams.

Both were former Broncos PR interns under Patrick Smyth. Ricker also graduated from the University of Colorado.

RELATED: 49ers' coach Katie Sowers will make history as the first woman and openly gay coach at the Super Bowl

RELATED: What song will J.Lo perform first and all the Super Bowl LIV prop bets you need to know