Five candidates to become the next Jaguars Head Coach 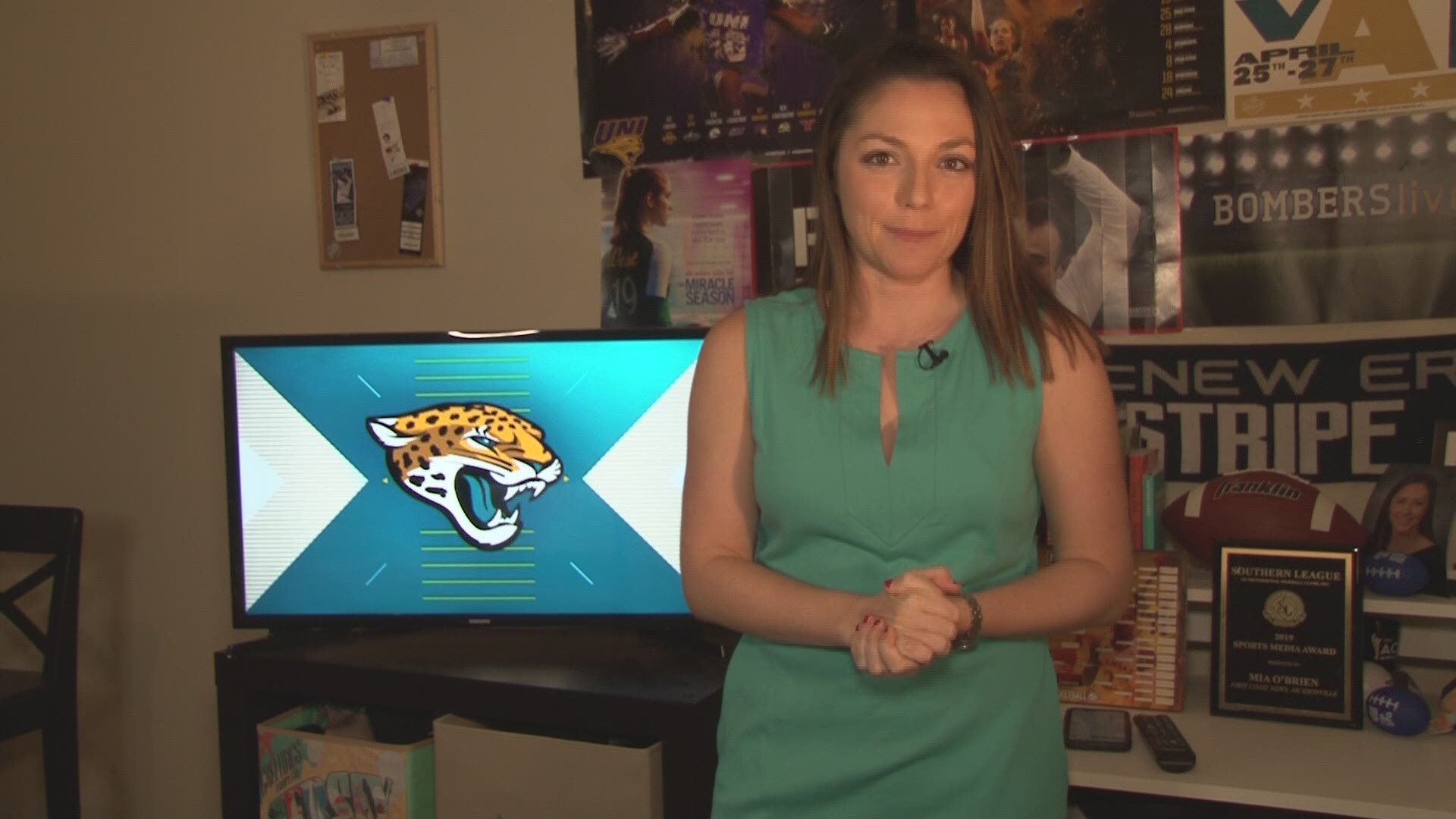 Doug Marrone has ridden off into the sunset, relieved of his duties as head coach of the Jacksonville Jaguars. Love him or hate him: you cannot deny the grace he maintained throughout this trying, 2020 campaign – while still holding the locker room together. Unintentionally, the Jaguars secured the No. 1 overall pick in a quarterback-heavy NFL Draft; so while Marrone may not be remembered for a winning record (12-36 since that 2017 AFC Championship Game), he may go down as a Duval County cult hero after all.

Not to mention, it really is a sunset: the future of the Jacksonville Jaguars franchise has arguably never been brighter. Armed with that No. 1 overall selection, oodles of draft picks, and the fourth-most cap space, the Jaguars head coaching job is arguably the most coveted this off-season.

Here’s five candidates to succeed Marrone (in no particular order):

Credit: AP
FILE - In this Nov. 4, 2017, file photo, Ohio State coach Urban Meyer walks on the field before the team's NCAA college football game against Iowa in Iowa City, Iowa. The Meyer-led Buckeyes seem to have more to gain than Michigan has to lose even if Jim Harbaugh is winless after three years in the rivalry. Ohio State needs to beat the Wolverines, and No. 5 Wisconsin in the Big Ten championship game next week in Indianapolis, to stay in the College Football Playoff mix. (AP Photo/Charlie Neibergall, File)

(If you watch the video version of this story first, you’ll see that Urban was my final candidate listed. But with how hot the Urban rumors have been the last 48 hours, we’ve got to address the elephant in the room first and foremost)

I’m not going to lie to you: I thought the idea of Urban Meyer as the Jaguars’ head coach was absurd just four weeks ago.

Now, I think it might be the best option on the table.

Meyer has never coached in the NFL. But he has coached – and won -- at two of the biggest names in college football. Much will be made about how much power was delegated during his tenure at the University of Florida (especially given off-the-field issues with several players), but make no mistake about it: Meyer ran Florida and Ohio State like a CEO. He is a Bill Belichick, an Andy Reid, a Pete Carroll for the Jaguars: he will be the head coach, GM, the janitor – everything.

Of course, that also opens the door for him to become Jon Gruden, too… but I believe Meyer is wise enough to surround himself with those who have coached in the NFL before, and not simply rest on his own merits. If Meyer is the pick, look for him to have not only the final say on his coaching staff: he will help Shad Khan select the next general manager of the Jaguars and have final say on roster decisions.

Given his health, Urban Meyer is only going to come out of retirement for a handful of jobs. Coaching Trevor Lawrence is one of them.

He’s going to be the hottest name on the head coaching market, and has reportedly already been courted by the Jags’ AFC South rivals, the Houston Texans. On paper, it makes total sense. Bieniemy is Andy Reid’s right-hand man. Reid’s previous offensive coordinators (Matt Nagy, Doug Pederson) have gone on to become mildly successful NFL coaches. Bieniemy has also been there every step-of-the-way for the development of Patrick Mahomes.

Much will be made that it is Reid who actually calls plays for Kansas City (Bieniemy just relays them to Mahomes). He served as offensive coordinator for his alma mater, the University of Colorado, in 2011 and 2012. Those teams won four games combined and were ranked 109th (2011) and 120th (2012) out of 124 teams in points per game.

(I don’t know Bieniemy personally, but his wife is named Mia, so they get some brownie points in my book)

Credit: AP
FILE - In this Sept. 29, 2019, file photo, Buffalo Bills offensive coordinator Brian Daboll watches the team warm up for an NFL football game against the New England Patriots in Orchard Park, N.Y. In his 20th NFL season and third in Buffalo, Daboll has transformed a once plodding, run-oriented attack into one of the league’s top passing units. (AP Photo/Ron Schwane, File)

If the Urban Meyer Plot does not happen, I would expect this to be the next name on Shad Khan’s list.

Daboll is arguably the second-hottest name on the head coaching market. The work he has done with the Buffalo Bills cannot be denied: he has taken the Bills from the 23rd ranked offense to the fourth-ranked offense in one season. He has helped make Josh Allen a star and the franchise’s all-time leader in single-season touchdowns and passing yards.

My skepticism with Daboll (if you want to call it that) is that the other four teams he served as an offensive coordinator for never finished better than 20th in the league in total offense. Of course, after serving as an NFL OC for those four teams, he went to Nick Saban Rehabilitation Camp – I mean, the University of Alabama – to become their play-caller. He then went to the Bills, and here we are.

Credit: AP
File- In this Dec. 24, 2017, file photo, then-Detroit Lions coach Jim Caldwell watches during the first half of the team's NFL football game against the Cincinnati Bengals in Cincinnati. The Browns have interviewed former Indianapolis and Detroit coach Caldwell for their job. Caldwell met Wednesday, Jan. 2, with general manager John Dorsey and others on the search committee at the team’s facility in Berea, Ohio. The team is confirming interviews after they are completed. (AP Photo/Gary Landers, File)

These next two are re-tread’s, so please don’t hate me.

Because I do believe that although the Jaguars *probably* won’t be the youngest team in the NFL again next year, they will still be young. They need a veteran coach who has been there before to steer the ship.

As a head coach, Caldwell has worked with Peyton Manning and Matthew Stafford. As an offensive coordinator, he helped Joe Flacco lead the Ravens to the 2013 Super Bowl. Trevor Lawrence may be as close to a finished product of an NFL prospect as we’ve seen in years, but he’s still going to have to adjust to a pro-style offense. He’s going to dive head-first and be committed to learning the NFL game, but it’s going to take time. That’s where Caldwell goes in.

If the Jaguars are to go with an older coach like Caldwell (he is 65), I would like to see a young, up-and-coming offensive coordinator (even if the Jags opt to have Caldwell call plays)

I know there weren’t a lot of playoff wins, but Lewis made Cincinnati relevant. After 12 combined wins the last two years, I think the Jaguars fan-base would be on-board with at the very least making the playoffs five years in a row, as the Bengals did from 2011 to 2015. In 16 years in the Queen City, Lewis had two seasons in which he won less than 6 games. The Jaguars have had eight such seasons this decade.

Much like Caldwell, I’d like to see the 62-year old Lewis (a defensive coach by trade) paired with a young, up-and-coming play-caller – much like he was in Cincinnati, with Jay Gruden as his OC. If not a Jaguars’ head coaching target, look for Lewis to possibly team up on an Urban Meyer (or Caldwell) ticket as defensive coordinator. He’s spent the last few years on Herm Edwards’ staff at Arizona State; that could potentially help in the scouting department, too.

Lewis reportedly interviewed for the Lions head coaching vacancy over the weekend.

Credit: AP
FILE - In this Saturday, Dec. 7, 2019, file photo, Ohio State coach Ryan Day watches during the second half of the team's Big Ten championship NCAA college football game against Wisconsin in Indianapolis. A year ago, Day was a relatively unknown Ohio State assistant. This December he's reigning Big Ten coach of the year and is eyeing a national title after leading the Buckeyes to a 13-0 record as the successor to the retiring Urban Meyer. (AP Photo/Michael Conroy, File)

Meyer’s successor at Ohio State is reported to be a target of the Jaguars per NFL Network’s Ian Rapoport. However, ESPN’s Adam Schefter reported Sunday morning that Day is not interested in interviewing for an NFL head coaching position at this time. In his second season as Ohio State’s head coach, Day has the Buckeyes in the National Championship; OSU has lost just one game during his tenure.

If Day isn’t interviewing for head coaching jobs – and the Jaguars are set on a young, up-and-coming college coach – Campbell might be worth considering. He has brought Iowa State from the depths of the Big 12 to Fiesta Bowl champions in less than five years time. He is 32-27 as the Cyclones’ head coach. Two of his three biggest stars – quarterback Brock Purdy and linebacker Mike Rose – have already said they are returning to Ames for their senior seasons.

Want to sound off about the Jaguars? Sports Anchor / Reporter Mia O'Brien can be reached at mobrien1@firstcoastnews.com and @MiaOBrienTV on Twitter.