What are 'the twisties' and why are they keeping Simone Biles out of Olympic events?

USA Gymnastics announced Friday that Biles would withdraw from the vault and uneven bar finals in Tokyo. 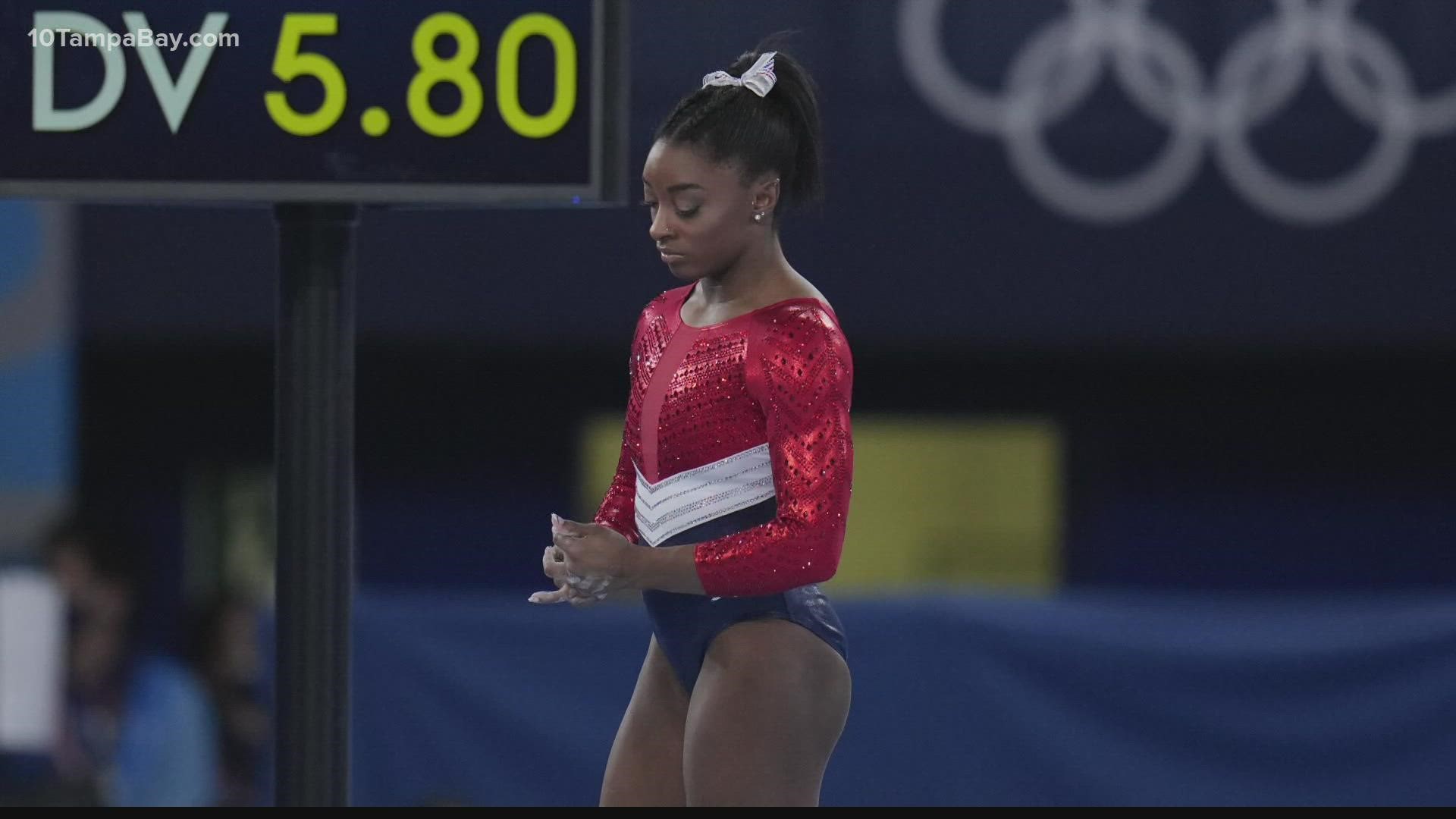 TOKYO, Japan — Maybe Simone Biles made soaring through the air look too easy. It's not — a fact she and other gymnasts who constantly negotiate with the laws of physics have long understood.

Every leap, no matter how routine, requires an innate sense of time and space. You have to know how many fractions of a second you have to make your body do what it needs to do. Just as crucially, you need to know you've got enough room to do it before the ground renders a verdict one way or another.

Sometime after qualifying at the Tokyo Olympics on Sunday, the four-time Olympic gold medalist lost her way. She kept telling her body to twist. It kept saying, “How about no.”

The “twisties,” as they're known within the gymnastics community, were back. And Biles knew it, leading her to withdraw from the team final after one rotation and skip the all-around final. She watched from the stands on Thursday as U.S. teammate and good friend Sunisa Lee claimed the gold.

On Friday, USA Gymnastics announced that Biles would withdraw from the vault and uneven bar finals to focus on her mental health. She hasn't yet ruled out competing in the floor and balance beam finals. A minibreak from the competition floor hasn't cured her. During a series of social media posts on Friday, the 24-year-old provided an inside look at the “twisties.”

After further consultation with medical staff, Simone Biles has decided to withdraw from the event finals for vault and the uneven bars. She will continue to be evaluated daily to determine whether to compete in the finals for floor exercise and balance beam. pic.twitter.com/kWqgZJK4LJ

SO WHAT ARE THEY?

The “twisties” are the sudden inability for a gymnast to make the requisite spins — or sometimes any spins — for a particular maneuver.

Biles posted a video — which she later deleted — of her doing a dismount on the uneven bars during training. She kept trying and failing to do 2 1/2 twists, just as she failed to do a full Amanar vault during the team finals on Tuesday night, coming up one full twist short, leading her to step away from the competition to protect herself.

“Sometimes I can't even fathom twisting,” Biles posted. “I seriously cannot comprehend how to twist.”

She called it the “strangest and weirdest thing.”

WHY DO THEY POP UP?

No one knows. Not even the greatest of all time. Despite some sloppy — by her unparalleled standards — moments during qualifying, Biles said the “twisties” didn't pop up until Monday.

She's dealt with them before. The difference this time? They're not just affecting her on vault and floor exercise, as they have in the past. Now, they're following her to bars and beam, too.

“It's honestly petrifying," she wrote, “trying to do a skill but not having your mind and body in sync.”

HOW LONG DO THEY LAST?

It depends on the athlete. For Biles, they can hang around for two weeks or more, making her availability for event finals seemingly a long shot at best.

Two-time Olympic gold medal trampolinist Rosie MacLennan of Canada struggled with her own version of “the twisties” while training for the 2016 Games in Rio de Janeiro. She recovered in time to top the podium in Brazil, but only after painstakingly relearning her skills over time.

“There (are) mental pieces to all sports, but in aerial sports where you’re slipping and twisting, there’s a huge mental component,” MacLennan said Friday after finishing fourth. “And when you get lost in the air, it’s one of the most terrifying experiences you can have.”

A terror that never really fully goes away.

“It sticks with you,” the 32-year-old MacLennan said. “So it’s something that like even to this day that you second guess yourself sometimes and it just takes a lot of really diligent work and a lot of patience and a lot of support around you.”

Credit: AP
Simone Biles, of the United States, lands from the vault during the artistic gymnastics women's final at the 2020 Summer Olympics, Tuesday, July 27, 2021, in Tokyo. (AP Photo/Gregory Bull)

ARE THERE OTHER VERSIONS OF THE TWISTIES?

Turns out, yes. American trampolinist Nicole Ahsinger was a 12-year-old prodigy in southern California when she developed a case of what she calls “the flippies.” She would over-rotate time and again. Ground would become sky and vice versa.

It got to the point where Ahsinger, now 23, became too afraid to do one flip let alone the two — or more — required for a sport that sends athletes three stories into the air.

“I would cry every day,” said the now 23-year-old Ahsinger, who came in sixth in the finals in her second Olympics.

She ended up moving from San Diego to Louisiana in an effort to recalibrate. The “flippies” eventually eased, but only after she rebuilt her skills literally from the ground up. Biles doesn't have that kind of time.

The vault and uneven bars finals are on Sunday. Biles is the defending Olympic champion on vault, and she unveiled the harrowing Yurchenko Double Pike in May.

Biles has four maneuvers named after her already in the sport's Code of Points. If she wants to make it five, she needs to do the Yurchenko Double Pike in Tokyo. Considering the vault's difficulty and her current issues, it seems highly unlikely she'll attempt it. She's not really a medal threat on uneven bars — where Lee and Belgium's Nina Derwael are poised for an epic showdown — so it might not be worth the risk.

Beam, where she earned bronze in Rio, and floor exercise are later in the week. Maybe she somehow regains her confidence in herself and her surroundings.