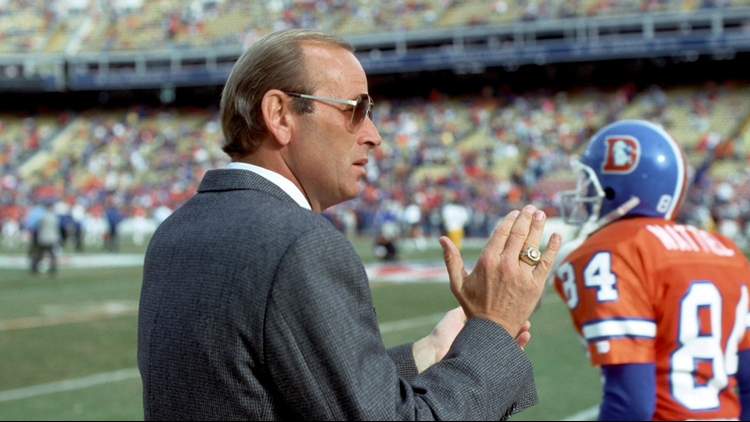 The Trust formally submitted a request to the NFL asking the league to arbitrate what the Trust is calling the "Wallace-Klemmer dispute.'' The Trust at the same time asked the court to put Bill Bowlen's lawsuit aside until the NFL determines whether to arbitrate the Wallace-Klemmer matter.
Author: Mike Klis
Published: 4:50 PM MST November 23, 2018
Updated: 8:20 PM MST November 25, 2018

ENGLEWOOD – The Pat Bowlen Trust filed a motion in court Friday requesting a stay to Bill Bowlen’s lawsuit until the NFL determines whether to accept a request to arbitrate its Broncos ownership dispute with Beth Bowlen Wallace and Amie Bowlen Klemmer.

The Trust also dismissed Beth Bowlen Wallace’s attempts to take control of the Denver Broncos by saying, “simply stated, in the trustees’ judgment, Ms. Wallace lacks the business experience and acumen, knowledge, leadership skills, integrity and character necessary to be the sole individual running an NFL franchise valued at $2.5 billion.”

9NEWS was unable to contact Beth Bowlen Wallace, but she released a lengthy statement that read in part: “This case is between Bill Bowlen and the trustees and it needs to be resolved in a timely manner. My sister Amie and I are disappointed that the trustees have taken what appears to be a delay tactic with this filing. ... We have never seen a copy of my father’s trust or the succession plan; we have had to rely solely on what the trustees have verbally told us over the past 10 years. We have both reached the age of financial maturity communicated through my father’s estate plan. We have concerns regarding the validity of the current trust as we recently learned my father’s original trust was revoked and replaced after his Alzheimer’s diagnosis.''

A document filed Friday afternoon in an Arapahoe County Court by attorney Dan Reilly – Pat Bowlen’s trial lawyer for more than 20 years (most famously in the Edgar Kaiser Jr. case) on behalf of the Pat Bowlen Trust, and obtained by 9News, state Beth Bowlen Wallace and Amie Bowlen Klemmer – Pat Bowlen’s daughters from his first marriage – first began disputing the trustees’ control of their father’s Trust four years ago.

The Trust formally submitted a request to the NFL asking the league the arbitrate what the Trust is calling the “Wallace-Klemmer dispute.’’ The Trust at the same time asked the court to put Bill Bowlen’s lawsuit aside until the NFL determines whether to arbitrate the Wallace-Klemmer matter.

“We have requested that the NFL accept arbitration of this private family matter, per the league’s constitution and bylaws, and we have filed a motion to stay the legal proceeds pending this ruling,’’ Reilly said in a statement on behalf of the Pat Bowlen Trust. “The Trustees will continue to implement Pat Bowlen’s succession plan.’’

As an attachment to the document filed in court asking to stay the Bill Bowlen lawsuit, The Trust provided an affidavit signed by Richard Robinson, a Denver estate lawyer who wrote the Pat Bowlen Trust. The affidavit stated Pat Bowlen was fully engaged and of sound mind when the Trust was executed in March 2009. Robinson also testified that Pat Bowlen was aware the trustees were involved in several other business ventures that may have been in conflict with his estate wishes, but that Bowlen had no objections.

Joe Ellis also serves as the Broncos’ chief executive officer and president; Slivka is the team’s general counsel, and Kelly has been a personal lawyer for Pat Bowlen and the Bowlen family for more than two decades.

The Trust and trustees were responding Friday to a 21-page lawsuit complaint filed against them last month by Bill Bowlen, the younger brother of the Broncos’ owner.

Some highlights from the Pat Bowlen Trust court filing Friday:

Robinson said many of the allegations presented in Bill Bowlen’s lawsuit “are factually inaccurate.’’

“Mr. Bowlen clearly understood what his assets were and was clear in his directions as to how he wanted his assets to be handled. … Specifically, Mr. Bowlen wanted his ownership interests in the team to be held in trust, with Mr. Bowlen named as the original trustee. He wanted three non-family members named as successor trustees. Mr. Bowlen wanted the trustees to decide if and when any of the Bowlen children could take over as Controlling Owner of the team.’’

Robinson added he wanted Ellis, Slivka and Kelly to be his trustees because they “were his trusted advisors. … He appointed them with full knowledge they would operate in multiple roles with respect to the Denver Broncos, including trustees, officers, directors, employees and/or his agents.’’

*The Trust states it has successfully and in good faith implemented Pat Bowlen’s succession plan. Starting with the 2013 season, when the Trust states it took control of the Broncos, the Broncos rank in the NFL’s top 5 in wins (60, tied for fifth with Carolina), are one of only three teams to have multiple Super Bowl appearances (along with New England and Seattle), and won Super Bowl 50.

*Off the field, the Trust states the Broncos’ franchise value has more than doubled. Citing Forbes Magazine, the Broncos have gone from a net worth of $1.161 billion in 2013 to $2.75 billion in 2018.

The trustees also point out the Broncos have sold out all 50 regular-season and playoff games since taking control and the team ranks in the top 5 in TV ratings.

Additionally, a 2014 Harris Poll said the Broncos had overtaken the Dallas Cowboys as “America’s Team.’’

As the Pat Bowlen Trust put it in its documents Friday: “The Broncos have been one of the most successful, profitable and popular franchises in all of professional sports.’’

*The Trust fired back directly at Beth Bowlen Wallace’s attempts to take control of the Broncos, saying she was told by trustees four years ago that she was not capable or qualified to run the franchise.

“Simply stated in the trustees’ statement, Ms. Wallace lacks the business experience and acumen, the knowledge, the leadership skills, the integrity and the character necessary to be the sole individual running this franchise.’’

*The Trust also claims the lawsuit filed by Bill Bowlen “was a thinly-veiled continuation of the attack by Wallace and (her older sister) Ms. Klemmer on Pat Bowlen’s succession plan and the Pat Bowlen Trust.

*In Trust filing footnote, it states "prior trust restatements (in 2002, 2004, 2005) empowered the trustees to sell the Denver Broncos was in the best interest of the trust of the beneficiaries." That may be the easy course given the Wallace/Klemmer dispute. But it's clear the three trustees have identified Brittany Bowlen, 29, as the likely chief ownership successor.

*Beth Bowlen Wallace began seeking control of Broncos nearly 5 years ago: "In 2014, shortly after Mr. Bowlen was declared incapacitated, Ms. Wallace (with Ms. Klemmer's support) hired litigation and trust counsel and began demanding trustees provide her with details of her father's estate plan and appoint her as controlling owner.''

*The Trust filing called Bill Bowlen a "surrogate" petitioner as his lawsuit was on behalf of Wallace-Klemmer. The court document infers Wallace-Klemmer didn't sue because Pat Bowlen included a "no-contest clause" in his Trust. This infers there would be financial and benefit repercussions to Wallace-Klemmer had they sued.

Beth Bowlen Wallace addressed this claim in her statement saying the lawsuit was between her uncle Bill and the trustees.

All this came in response to the lawsuit Bill Bowlen filed October 25 that asked the court to remove its three trustees Ellis, Slivka and Kelly as agents for the Pat Bowlen Trust and the Broncos because they are not representing the wishes of his older brother, Pat.

Bill Bowlen, who sold his interest in the team to his brother in 2002, cited a conflict of interest the trustees have between the team, Pat Bowlen’s estate and other business ventures. The Bill Bowlen lawsuit also stated he believed Beth Bowlen Wallace, one of Pat’s older daughters, should take control of the Broncos.’

Pat Bowlen has seven children – the two daughters, Beth and Amie, from his first marriage and five from his current wife Annabel: Sons Patrick and John; and daughters Brittany, Annabel and Christianna.

Pat’s wife Annabel announced in late-June she also has been diagnosed with Alzheimer’s, a brain disease characterized by a progressive loss of mental ability.

At the heart of this dispute is Beth Bowlen Wallace wants to take control of the team while it’s become apparent the Pat Bowlen Trust has been grooming another one of Pat’s children, 28-year-old Brittany, to one day assume the position of principal owner.

Brittany Bowlen worked two years in the NFL rotational program as a fulltime employee, had an internship with NBC Sports, received her M.B.A. from Duke University, worked one year for the Broncos and is now working with McKinsey & Co., a global consulting firm.

Beth Bowlen Wallace, 47, began to officially take measures against her father’s trustees when she hired a national publicity firm to send out a press release on May 31 announcing she is ready and qualified to take control of the Broncos.

Beth Bowlen Wallace received her law degree from the University of Denver, but her work experience has come into question since it was revealed in Bill Bowlen’s lawsuit she was fired in 2015 by the Broncos from her special projects position.

What’s next? Bill Bowlen’s attorneys have 21 days to respond to the Trust’s request to stay his lawsuit pending NFL arbitration of the Wallace-Klemmer dispute, but a motion to essentially stop the stay and carry on with proceedings could come much earlier, perhaps as early as next week. The Trust will then have 15 additional days to file its response. So, a judge -- the case has been assigned to the Arapahoe County Court's Division 11, where 18th Judicial District Judge Charles M. Pratt presides -- doesn’t figure to rule on how to proceed in the Bill Bowlen lawsuit against the Pat Bowlen Trust until after the New Year.