Peyton Manning: Choosing Denver was "best decision I ever made"

"Everything I thought about Denver and heard about was true. Everybody's been so warm and welcoming to my family, embracing us, believing in me." 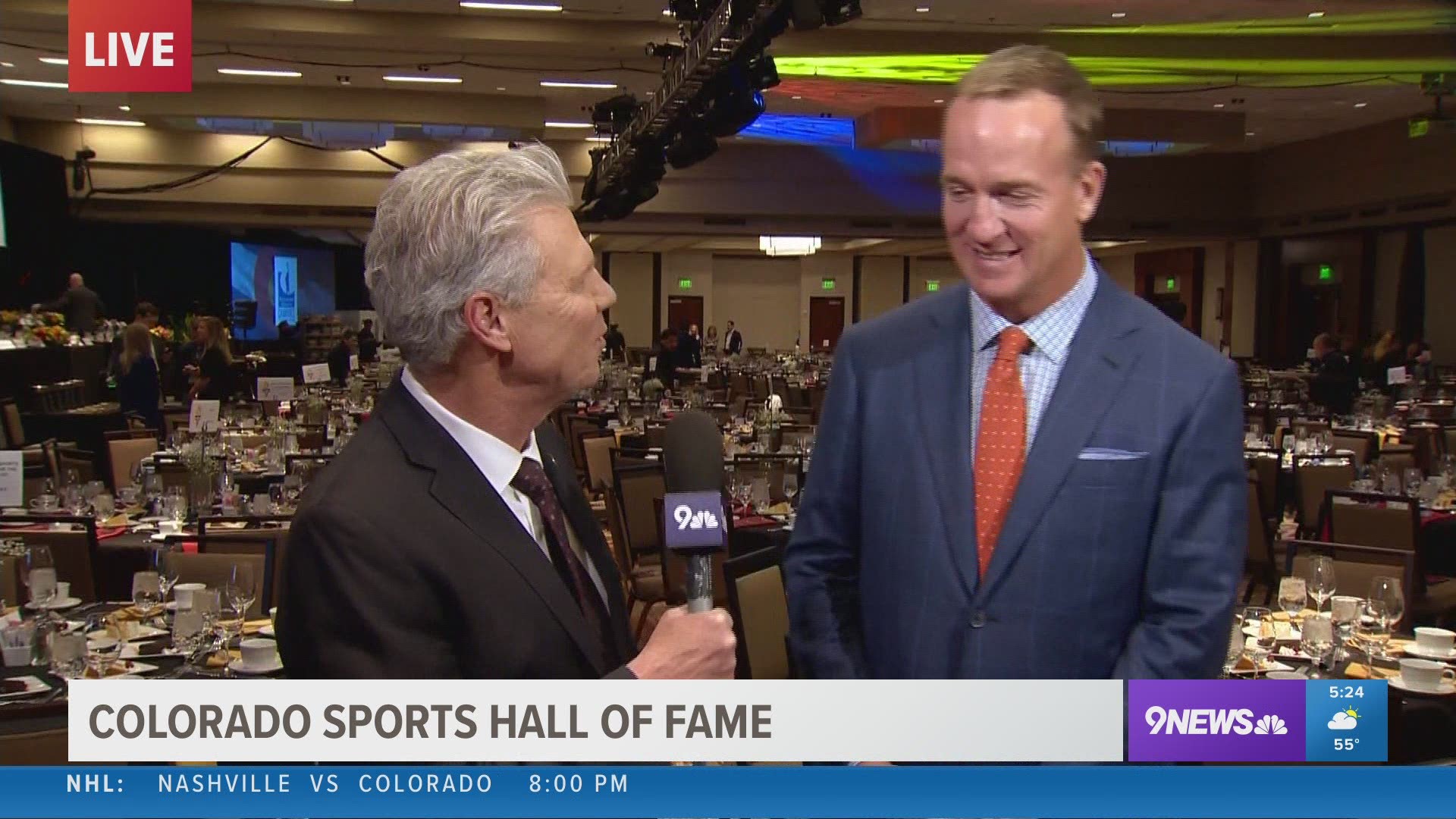 DENVER – Before his interview with 9NEWS, Peyton Manning was flipping through the photos on his cellphone.

Someone from his old Indianapolis Colts days sent him a photo of a T-shirt that had the team taking Ryan Leaf with their No. 1 overall draft pick.

That T-shirt was made up so the T-shirt company wouldn’t lead out the Colts’ selection. Two T-shirts were made. One was the dummy T-shirt of Leaf.

One was of Manning, who was the choice 20 years ago Wednesday in the 1998 NFL Draft. Who would have thought that exactly 20 years after he entered the league, Manning would be going into the Colorado Sports Hall of Fame? Manning headlined a group of inductees during the induction ceremonies Wednesday night at the Hilton Denver City Center hotel.

“It’s hard to believe it’s been 20 years,’’ Manning said. “I always wanted to play for the same team that drafted me. I think that’s every player’s goal but things change and business things happen and I had a chance to go play somewhere else and I couldn’t have picked a better place to come and play. I always liked Denver.

“Always had great respect for the organization. That had a lot to do with me considering them [as a free agent]. And once I got here, everything I thought about Denver and heard about was true. Everybody’s been so warm and welcoming to my family, embracing us, believing in me.

“It’s why we still live here. Three seasons later my family, Ashley and kids, we’re still here. It’s one of the best decisions I ever made and it’s a great honor to be going into the Colorado Sports Hall of Fame.’’

Manning spent 14 seasons with the Colts and the final four of his career with the Broncos. During those four seasons, the Broncos went 13-3, 13-3, 12-4 and 12-4 in the regular season – the best, four-year stretch in franchise history.

They appeared in two Super Bowls, winning the Super Bowl 50 in what was Manning’s walk-off moment at Levi’s Stadium in Santa Clara, Calif.

After he broke Tom Brady’s single-season touchdown record with 51 touchdowns, Manning spoke about his records getting reset the next week. But here it is nearly 5 years later and his records still stand, including his career marks of 539 touchdowns and 71,940 yards.

“For now,’’ Manning said. “I think some of them are close to it. I’m not sure about some of those single-season ones. I’m not sure if anybody will get those, but the best part about that year is we were winning games. If guys were playing great along with winning games, I’m all for it. It was a fun season and fun offense to play and lot of energy out there.

“You never quite knew what was going to happen out there but it was exciting. The entire four years were exciting.

“I was thinking back to March of 2012, had helicopters kind of following me around. I had you tracking my car service or whatever it was. That’s been a long journey to here, going into this Colorado Sports Hall of Fame. It was a fun journey. I’m so thankful for the fans, Broncos organization, coaches, teammates. It’s been quite a ride.’’

In the going on three years since he retired, Manning still hasn’t settled on a second career. He hits the speaking bureau tour like nobody’s business, but he turned down two network opportunities to serve as a TV analyst.

Manning just won’t cross to the dark side.

“I passed on the opportunity this year,’’ he said. “I can’t speak too much on years to come but it just didn’t feel like the right fit for me. I still like staying close to the game, staying involved in different ways. Always consider myself being an ambassador.

“I still listen to a lot of things and I’m sure if I took a job I’m sure you’d probably hear about it.’’