Pomona coach steps down after 18 years, attributes success to his family

The Pomona football head coach reflects after 18 successful years at the helm of the Panthers, and nearly three decades in Colorado coaching. 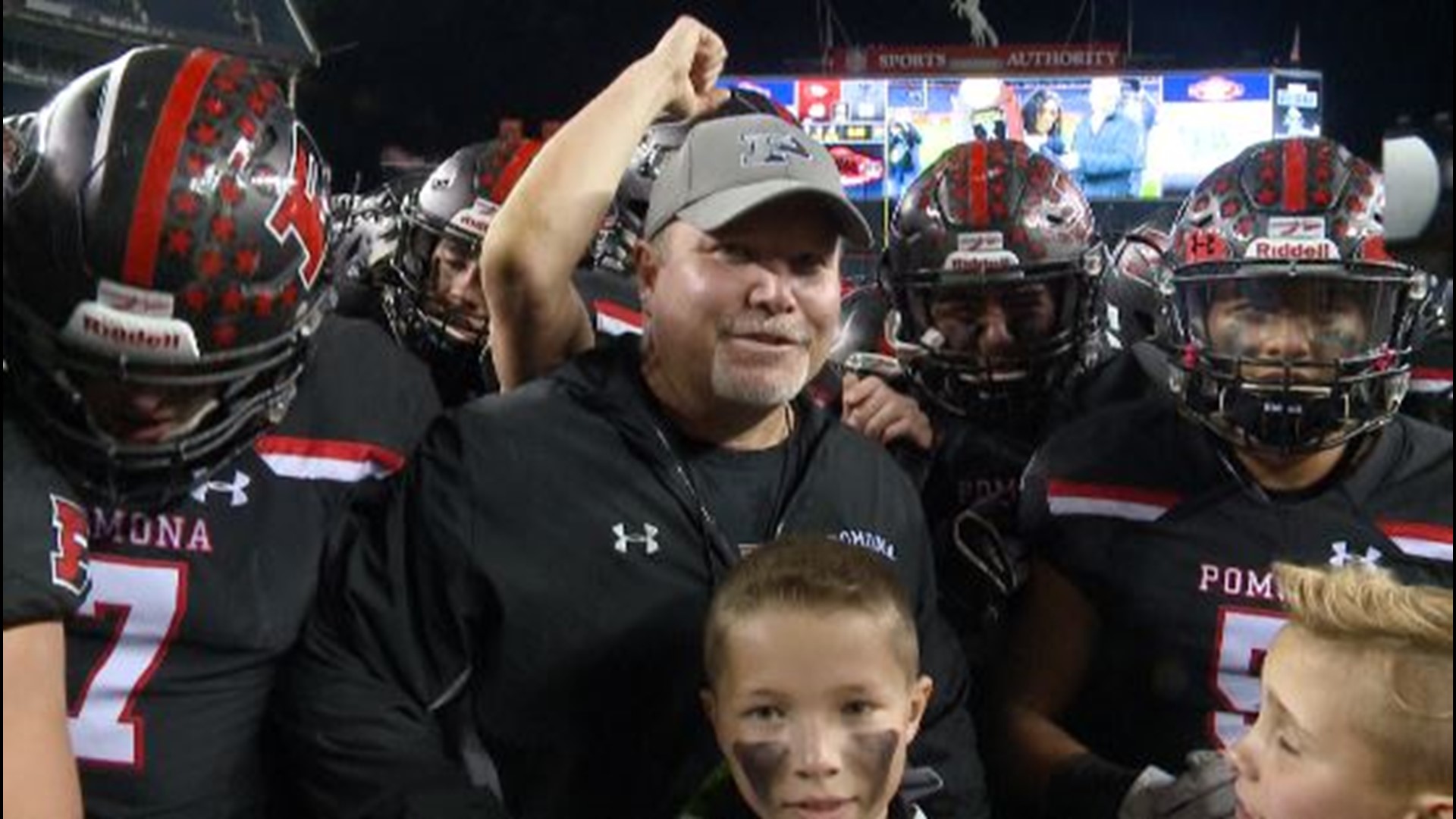 ARVADA, Colo. — "We've been here since 1980. That's 40 years. That's a long time! There's a lot of things that come into your mind," Jay Madden said, as he walked down the newly-turfed practice field at Pomona High School.

It looks different from when he practiced there in with his father as he the head coach in the 1980s.

"It's got to be one of the worst fields in Jefferson County, in the last few years, that's for sure! We really needed this field."

The memories start flowing, along with some faint tears. From a student-athlete to eventually a head coach at Pomona, the memories are not only wins and losses.

"Bus rides home after a big win, the celebration after the game when we do our 'Dog Soldier' chant, just the locker room before practice and pre-practice, just walking around with the kids, and then just all of the times we went out and competed and we fought. We didn't back away from anybody and I'll always be the most proud of that," he said.

Luckily, he won't have to squint to try to remember some of those moments. The Maddens keep boxes -- six of them, to be exact -- in their house of photos and newspaper clippings. His wife Shalene showed us some of her favorites.

"This is Max {Borghi}, he was our 2017 running back at Washington State," she said, holding up a signed action photo. "I just love what he said, 'to the greatest mentor and coach,' so that's a keepsake."

Jay remembered the same moment. It's hard to forget that 2017 team, since that's the only one that brought him a state title throughout his 18 seasons.

"I just saw a picture of it again today," he said. "That group of kids we had, we had back to back to back great classes. They weren't just great football players, they were great kids."

He may be a Panther for life, but Madden's head coaching career actually started 24 years ago at Dakota Ridge. He was the first head coach in the school's history.

"1996, I think was the first year, and we went 3-7 the first year and then we won the league championship the next two," he said. "I'll always be a Dakota Ridge Eagle in some part of my body. Obviously, I bleed black, but it was awesome. I mean, everything was new. You were learning from scratch and there was no playbook to do it."

Prior to Dakota Ridge, he paid a one-year visit at Alameda, and spent some time with Mullen before taking over the helm at Pomona in 2003. Four different schools in the better part of three decades, all with his better half by his side.

"When he got the job at Alameda, we were just dating and I told him, 'If I can't beat you, I'm going to join you. I'll do whatever I have to do to be there with you and by your side and so we've always just made it a family thing," Shalene said.

She went back to the photos in front of her, picking up a picture of the whole family on the field donning Panther gear. Jay, Shalene, their oldest daughter Ashley, middle daughter Katelyn, and their son Tyler.

"All of the different pictures we have with the kids on the field are really important to me because it's always just been what we've always done. We've always been together and done it as a family," she said.

Football has been the tie that bonded this family together. Jay credits his wife Shalene with being step-by-step with him through his success.

"She's been a mother to every single football player I've ever coached," he said. "She is Mama Madden, she is the CEO of Pomona football and always has been."

Shalene said she is a planner by nature and wanted to take some of the burdens off of his shoulders, so he could focus on the x's and o's. Her main focus was creating a fun atmosphere for the players before and after games.

"I just wanted the kids to have, and this sounds so cliche, but I wanted them to have the movie experience. I didn't want them to walk off the football field, come back, and play the game," she said.

While his family has spent most of its time focusing on his games, now Jay can take a breath and focus his attention on his youngest child Tyler's games.

"My whole family has invested all of our time into Pomona and all of our energy. It's going to be hard to fill that void but I'm going to enjoy watching my son play high school sports and not be so uptight about what's going on, I can just relax and let someone else worry about winning and losing."

The new chapter of watching from the bleachers will even take place at a new school. Tyler is a freshman at Golden, paving his own path at a school where his father began his journey as an assistant coach.

Shalene also considers this decision a pause for Coach Madden, and not a retirement. Still, after 18 years at the helm of the Panthers, he's leaving a lot out there on the field.

'[I want my legacy to be] that we gave everything we had to this program. We loved those kids, every single one of them that played for us. We cared about them. That we were kids who did it right, tough kids who overachieved," he said.

"When we first designed that 'P,' we gave a shirt to the kids that just had the 'P' on it and they said, 'Coach, it doesn't say Pomona,' and I said, 'If we play well enough, they'll know what that P means,' and I think they do now."