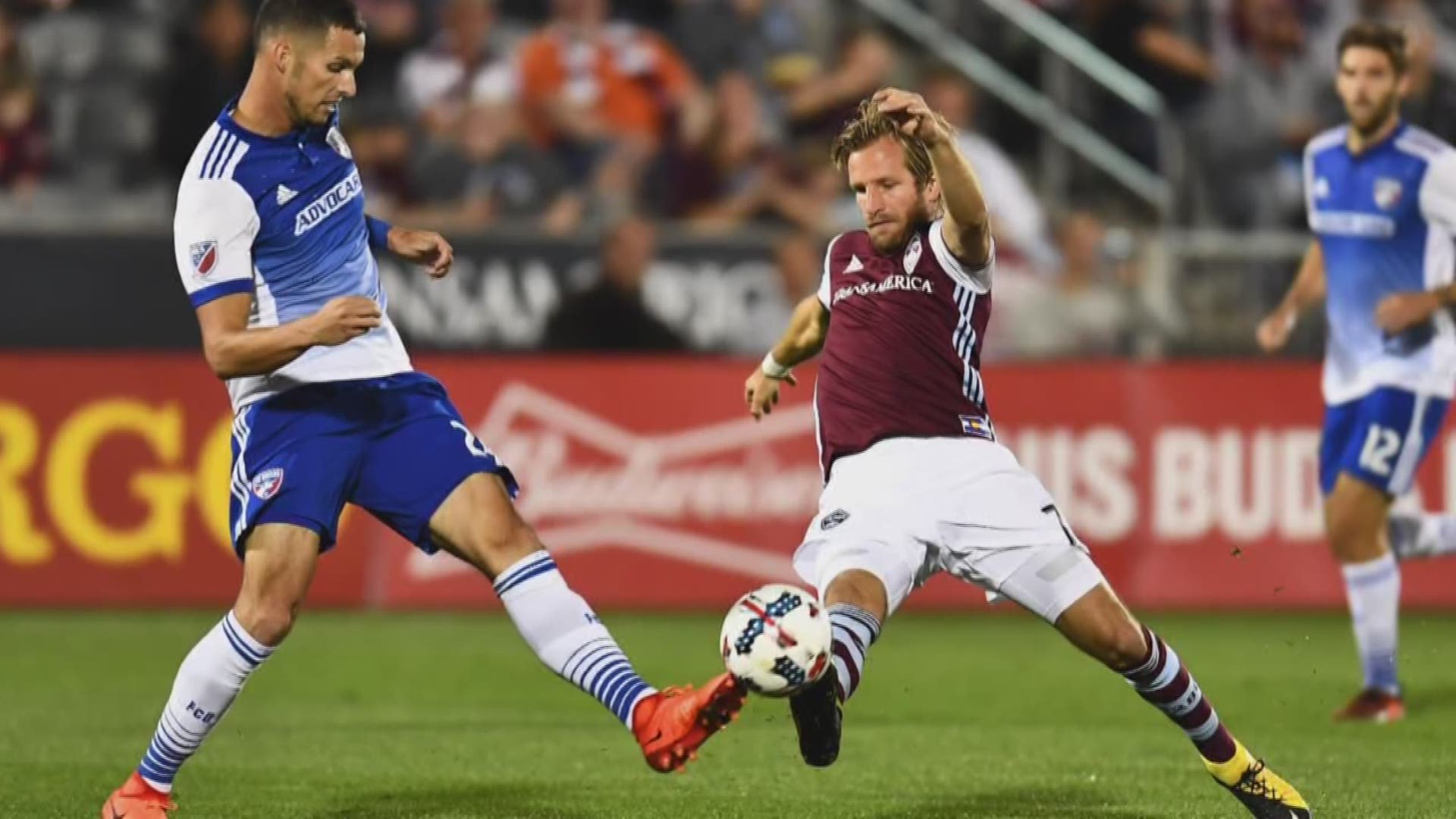 With a fifth straight loss, the Colorado Rapids have slowly sunk to the bottom of the Western Conference.

I sat down with Rapids Manager Anthony Hudson to address some of the issues, including their five-game skid and the status of Stefan Aigner.

UPDATE 5/29/2018: While this is just Hudson's side to the story, I did request an interview with Stefan Aigner. He declined to be interviewed.

Cealey Godwin, 9News sports reporter: “First of all, let’s talk about how training this week. How has it been? With the five game losing streak, I can understand how the mood might feel around the club right now…”

Anthony Hudson. Rapids Manager: “Actually the mood has been good. We had a very, very good meeting on Monday morning. An honest meeting. A meeting that you would expect needs to happen after a run like we’ve had. And the reaction has been very good. The intensity has been good. I would say it’s probably the best reaction you can have after a run like this. It’s a strange one because it’s a terrible run, everyone is hurting but we still believe, you know? Players still have a lot of belief but training has been good.”

CG: “The “Aigner Watch”…when are we going to see Stefan Aigner?

AH: “(long pause) It’s um…it’s been a difficult situation and I would say disappointing as well. To answer your question,I don’t know. To start with, I think I articulate this in the media, it’s been fitness issues. There wasn’t really any improvement there. And myself, the staff, even Stefan to his credit has been honest about it and has said it’s been an issue. We’ve tried to address it, we’ve even implemented different things that we can do. I’ve probably had more meetings with Stefan than any other player put together. We’ve even given him an extra recovery day, you know, extra to the rest of the team, to help his body recover quicker. That was something that he thought could help him. You know, that hasn’t worked. I’ve offered to change his role in the team. He’s been happy where we’ve been playing him. And I’ve even been willing to change the shape and the structure of the team. Which is, if people know me, that’s quite significant because I don’t really budge too much. But in our context, he’s a very, very important player. He’s a player who has been brought in as an experienced player, a big player, and we’re trying to find a way to solve the situation. Now none of that has really worked. What the disappointing part is we need to see a willingness to help the team. Help the team win and we haven’t seen that yet.”

CG: “What other positions were you considering moving him?”

AH: “When he first came in he wanted to play as an attacking midfielder, a No. 8. We’ve talked several times since then about moving him as a No. 10 and even changing the system for him as well. And no, he’s been happy with that role. We just haven’t seen a response and it’s a shame because right now we are in the process of completely rebuilding the team. I hate bringing it up because I know people don’t want to hear it. And the bottom line is we all hoped it would have happened quicker. I want it to be quicker. And sometimes it takes a bit longer. And right now, situations like this, it is taking a bit of time. The ball really is in his court. I’m still open. I don’t think I’ve ever given this many opportunities to a player in my life. But we also need him so if the time came where he was willing, then the door is open.”

CG: “You’ve moved around some other players, tried out some different rotations, mainly up top. You’re trying to see these two guys who want it the most. Have you figured out that combination up top? What works the best for you guys?”

AH: “It’s not straightforward because if you look at each situation, Stefan slightly separate…Gashi, for example, has missed most of preseason, early part of the season. Yannick Boli came in after the season had started. [He] hasn’t played any football since October and really needed a preseason. In fact, I would say it’s only been in the last week or so where I’ve seen now he’s starting to look at playing at intensity and looks sharp, which I’m really, really pleased about cause it’s taken some time. But he needed a preseason. Joe missed a spell and he’s come back and he’s had a run in games. And you’re right, we’re waiting to be in a position where everybody is fully fit, match ready, sharp. And we’re getting there now in terms of having a squad that, strikers are available and in a position to help the team physically as well as being sharp to play.”

CG: “How difficult is when you bring in so many new players to gel and get comfortable to where they can almost sense the presence of another guy and what they’re gonna do and anticipate that?”

AH: “It’s something that I was a bit premature in, in preseason. Around the Toronto game, I think I said five or six games we’re gonna be [comfortable]. In hindsight, looking back…at the time, we hadn’t even signed our strikers. And we were still looking for strikers and the team wasn’t set. We’ve got ambition and we want to do well and we always want to have ambition until it’s not possible. We want to go as far as we can and we believe we can as well. Now with that said, we talked about the striker situation, it takes time to build a team with so many new face. And to add into that, and this is not an excuse, we’ve lost a few players to injury and we’ve also had players come in late and I think for myself or other people to sort of jump on the performance of some players who really just got into the team and started going it’s probably a little bit premature as well.”

CG: “Portland coming into your house, they actually don’t fare well in Commerce City (1-6-3 all-time at Colorado). Don’t know if it’s the altitude or not... but they’re a team that has won five straight, you’re on your fifth straight loss here, what would win over a team like Portland mean for this club?”

AH: “A win right now against any club would be huge for us. It’s what we need. They didn’t get off to a great start as well. It’s a game where, this week, we’ve had some pretty intense meetings. There’s been a great response from the players. And the focus from us has to be, in spite of this sort of run that we’re on, the focus has to be on how we’re going to beat Portland. This is a great opportunity for us, hopefully in front of a big crowd, and we want to put things right.”