Sing along with CU's Sarah Brown

Brown is the picture of a well-rounded student-athlete 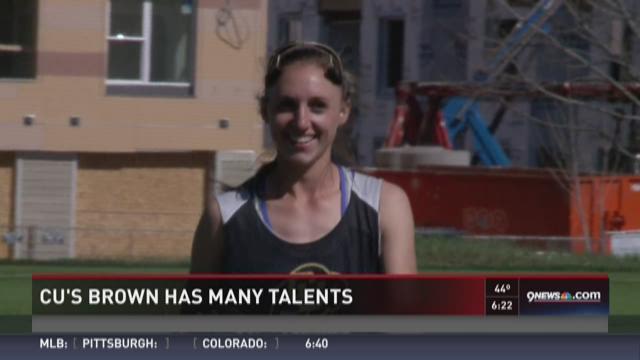 She played a little of everything.

"I did tennis, I was on swim team, basketball. I grew up playing a lot of boys sports, boys lacrosse. I tried everything," said University of Colorado sophomore Sarah Brown.

One thing she didn't play was defense growing up. Brown was a prolific scorer on Centaurus High School's lacrosse team so it was a bit of a surprise when the Buffs moved her to defense this year.

"At first I was like, I kind of miss shooting and attack and being on that end," Brown told 9NEWS. "But it's been better for me and more beneficial."

Even when she's not on a field, or a court, Sarah is always playing something.

She first picked up a guitar in 5th grade. Sarah and her two sisters have been playing in a band together for years.

"I love them. They're my off the field team," said Brown.

Sarah sang and played for us just off the Buffs practice field. She still had her jersey and cleats on, the picture of a well-rounded young woman.

"To have to practice different skills is just a really huge aspect in my life, and I think it's a very beneficial," said Brown.

The genre is country and the girls love performing their own material.

"Writing songs is one of my favorite things to do. It's a great outlet," said Brown.

They do play covers, and rock, some folk, and even pop. Not surprisingly, with Sarah Brown involved, the group plays a little of everything.