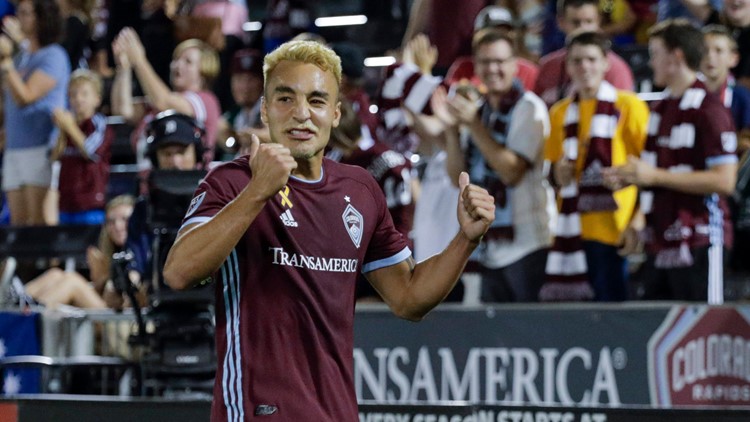 Photo by: AP Photo/Joe Mahoney
Andre Shinyashiki reacts to scoring his second goal against the Seattle Sounders, during the second half of an MLS soccer match Saturday, Sept. 7, 2019, in Commerce City, Colo.

Shinyashiki, 22, is the second Rapids player to be named Rookie of the Year after Dillon Powers in 2013.

“It’s such an honor,” said Shinyashiki. “Going against guys that are such high quality, like Hassani [Dotson] and [Brenden] Aaronson, and for me to win the award, not necessarily over them but together, is good because those guys are very quality players and to come out on top and win is amazing and a dream come true.”

Selected with the fifth overall pick by the Rapids in the 2019 MLS SuperDraft, Shinyashiki made his debut during the Rapids' home opener against the Portland Timbers.

During his rookie year with Colorado, Shinyashiki had 18 starts in 31 appearances. The forward had seven goals and three assists.

Before joining the Rapids, Shinyashiki attended the University of Denver where he scored 28 goals in his senior season in 2018, the most in NCAA men’s soccer in 20 years.

“We couldn’t be more proud of Andre’s achievement,” said Pádraig Smith, Colorado Rapids Executive VP & General Manager. “It’s a testament not just to his natural talent, but also to his strong work ethic and mentality. He was a key figure in our club’s turnaround this year and we’re excited to see him build on this year’s performances and become a key contributor for us in 2020 and beyond.”