The former Grandview High School star is the first woman from Colorado ever selected in the first round of the WNBA draft. 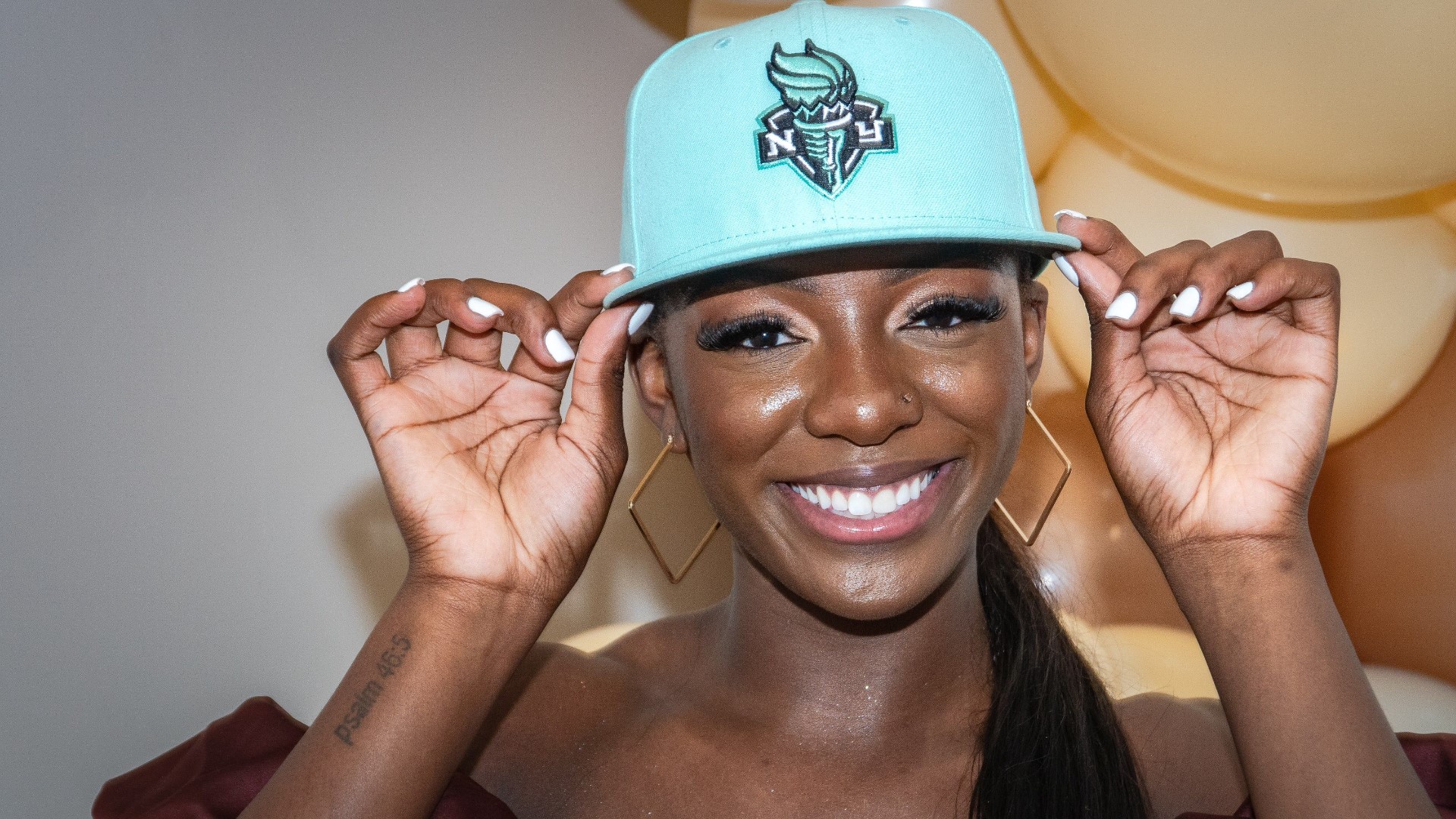 BROOKLYN, N.Y. — Nothing prepares you for the moment that your life changes.

"It was just so overwhelming in the best way possible. The whole night, I couldn't sleep. I was just really excited and that's just such a huge deal, hearing your name, and it's a feeling that I can't even really describe."

Michaela Onyenwere was selected 6th overall in the 2021 WNBA Draft by the New York Liberty. She shared the moment with her entire family in their home in Aurora, Colorado, and then her moment was shared by tens of thousands of Twitter users.

"Like you all saw on TV, they're very excited for me and very proud of me, and my Grandma went viral [for dancing], which was very funny.," she said. "That's just my family. They've always supported me in my basketball adventures and off the court, as well. So I just know that I have a family that's always going to support me and always have my best interests and have my back, so I'm just very grateful for that."

The Grandview graduate made history that night, by becoming the first woman from the state of Colorado to ever be selected in the first round of the WNBA Draft. Mesa Ridge graduate Kylee Shook became Colorado’s highest-drafted player when the New York Liberty selected her at No. 13 overall out of Louisville in the second round last year.

"It makes me proud to be from Colorado and I'm glad that I'm able to set the foundation for being in the WNBA and drafted in the first round, and I hope that I'm a representation of this city and this state," Onyenwere said.

Onyenwere led the Grandview Wolves to their first 5A state title as a senior in 2017. She was also the state's first three-time recipient of the Gatorade Player of the Year award.

"I hope that little girls can look up to me and be like, 'I can do that because she did it and she went to school right down the street from me.'"

The representation goes way beyond state lines. Michaela is first-generation American, by way of Nigerian parents. Draft night was a celebration for their entire community.

"I received so many messages from the African community, just all over the world, saying 'Nigeria's behind you' or 'Africa's behind you,' or  'I'm a little girl from Nigeria and I look up to you and you're an inspiration because I didn't know I could do something like this, but seeing you, a Nigerian woman on TV, and what my Grandma did, it really did mean so much to a lot of people that I couldn't even really understand until that moment really happened," she said.

She was once that little girl. Michaela's father, Peter Onyenwere, proudly showed her his medals from the Nigerian Olympic track team. She said he inspired her to become a high-level athlete, and now she is training to be a part of Team USA's inaugural 3x3 Olympic Basketball team in Tokyo.

But first thing's first. Onyenwere arrived in Brooklyn Monday to begin rookie orientation. She's aiming to make a roster headlined by last year's first-overall pick, Sabrina Ionescu. The two faced off for years in the Pac-12, with Ionescu calling the plays for Oregon and Onyenwere knocking down threes for UCLA.

While fitting in to her new home and team is at the top of her to-do list, Onyenwere is also grateful to be joining a league that puts social justice at the forefront of its priorities.

"I think seeing what the WNBA players did last year in the bubble, was so inspiring. We saw what was going on in this country, the civil unrest and the injustices that black people were facing at the time, and to see a league of mostly black women step up and be at the forefront of those initiatives, was so inspiring," she said. "We actually started something on my team, as well. To see that and to see what they did, kind of inspired us to speak up and continue to use our platforms."

Rumors have been sparking this off-season of expansion past the 12 current teams in the WNBA. Onyenwere is certain that her hometown should be at the top of their list.

"I would love to see a WNBA team in Denver. I think that people would definitely flock to those games and that would be really cool," she said. "But obviously, I would love to have the support of Colorado follow me all the way out to the east coast."