Calvin Anderson's experiences helping him prepare for the 2021 season

The Broncos' looming questions at right tackle could be solved internally this season as NFL free agency approaches. 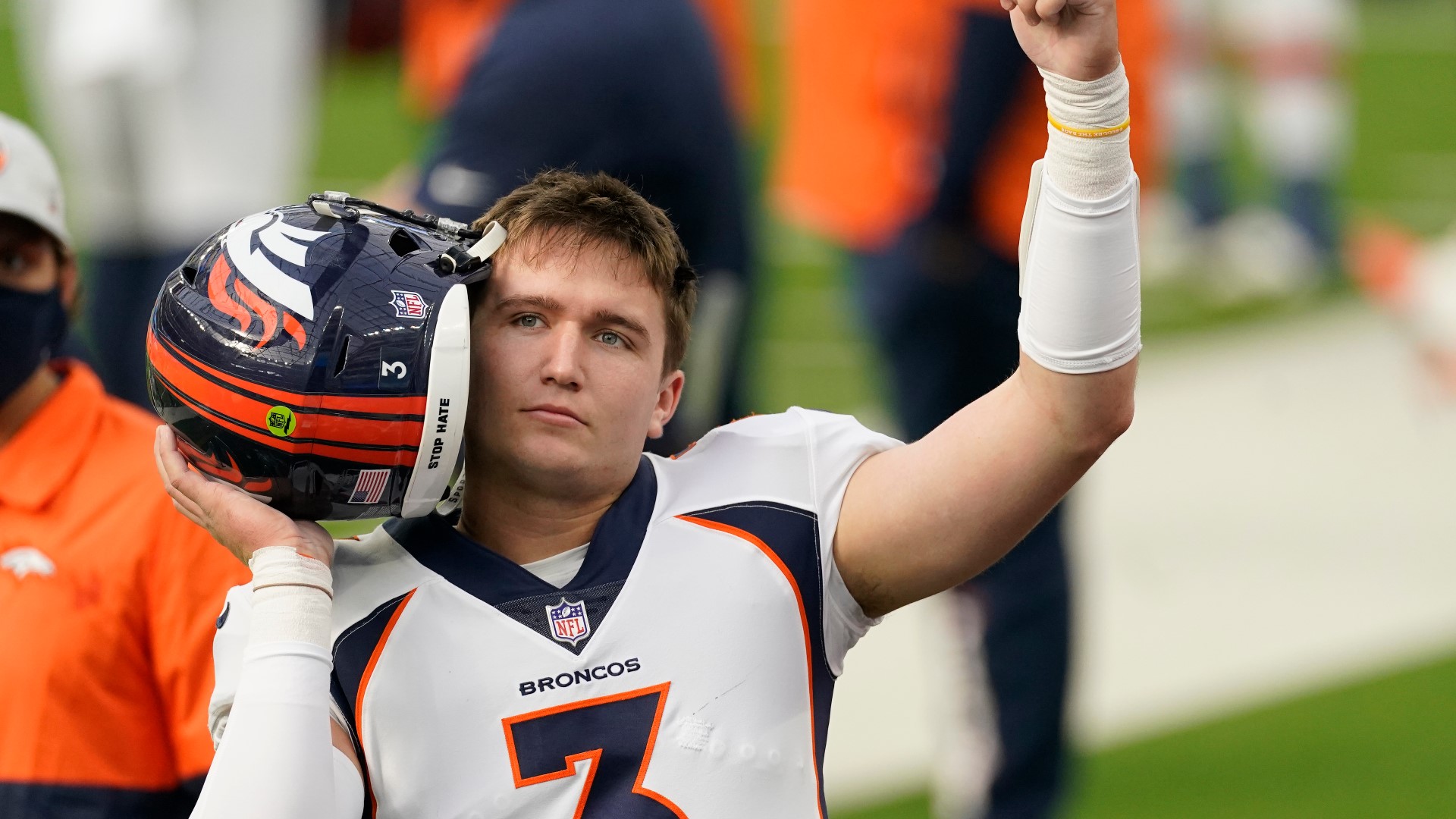 The Denver Broncos enter the 2021 off-season with some questions regarding the outlook at the right tackle position. But at the same time, they may have an in-house solution already on their roster.

Calvin Anderson enters his third season in the NFL and could be one of the Bronco's best-kept secrets. Anderson’s journey began in college at Rice, where he started 36 games for the Owls from 2015 to 2017 before transferring as a grad student to the University of Texas in 2018. Anderson also started all 14 games for the Longhorns that season and put himself on the radar for NFL teams after being named an All Big-12 Honorable Mention at tackle, and being invited to play in the NFLPA Collegiate Bowl.

Anderson’s NFL journey began after signing with the New England Patriots as a college free agent, but would be released shortly after and claimed by the New York Jets. After spending the preseason with the Jets, Anderson was eventually waived by the organization, but they would later claim him and place him on their practice squad.

Meanwhile in Denver, the Broncos were looking for help at right tackle after Ja’Wuan James, one of their key free agent signings in the offseason, went down with a knee injury. James’ injury elevated Elijah Wilkinson to the right side of the Broncos offensive line, but the organization needed depth behind him. That’s when Anderson received the call that he’d be heading to Denver.

“The very first day I was in Denver, my very first practice, I get on the field and I went to my left tackle position, I look across from me and I'm taking reps against Von Miller,” Anderson recalled in a recent interview with Locked On Broncos Podcast. Coming in as a rookie and going against a future Hall of Fame pass rusher was certainly a welcome to the NFL moment for Calvin. “I think that was one of those moments I’ll never forget, where I look back and hopefully look back in the future, and I say ‘Man that was the moment I realized I was in the NFL, this is where the dream took me, and what a moment going against a guy who is all time at the position.”

Anderson mentioned how humbling of an experience it was at first being the fresh face in a locker room, coming into a new situation and environment where he would get to be coached by a Hall of Famer in Mike Munchak, who was also entering his first season as the Broncos offensive line coach.

The Broncos would go on to have Anderson on their active game-day roster for the rest of the season, as Coach Munchak would learn more about his starters on the offensive line, and the players he believes he could develop into being potential starters. Not only was Anderson learning from Munchak, but starting left tackle Garett Bolles also took him under his wing, and a friendship began.

SUBSCRIBE: Locked On Broncos is available on Apple Podcasts, Spotify, Google and wherever you listen to podcasts.

“Coming into the organization I didn’t really know anybody, and I especially didn’t know what it really takes to play offensive tackle in the NFL, and Garett from the very beginning, from the very first day that I met him, kind of took me under his wing, and he didn’t have to do that," Anderson explained. "Obviously in the NFL, most people are looking at everybody as competition, but I came in and Garett from the very first time we met took me under his wing, we’ve been through some similar situations family wise and our backgrounds, we clicked and hit it off right from the jump.”

For Anderson, he said it was great for him at this point of his career because both he and Bolles pushed each other all season long because they share a similar work ethic. Iron sharpens iron, a familiar mantra that the Broncos utilized for the 2015 season that led them to a Super Bowl, was something that they used to make each other better in the position room, practice, and away from the field.

“It’s nice to be in a relationship with somebody at this level at the highest level possible, who actually wants to see you succeed as much as you want to see them succeed, that’s a genuine friend and I consider Garett a genuine friend before teammate, before anything else and I’m appreciative of that,” Anderson said.

Fast forward to the 2020 NFL season and Anderson found himself on the Broncos' active roster once again, but this time he would get a chance to showcase what he could do during the regular season. Demar Dotson, a late off-season addition for the Broncos found himself dealing with a hand and groin injury that would sideline him against the Las Vegas Raiders in Week 10. That’s when Anderson would get his opportunity to start and he was ready for his chance to shine.

Despite the Broncos 37-12 loss, Anderson stepped in for the Broncos and demonstrated flashes of what he could do for them. He was quick off the ball after the snap, understood the leverage and angles he needed to help protect Quarterback Drew Lock, and it was his first-time-ever playing right tackle in his career.

“I played right tackle for the first time this year in training camp, and it was a good experience for me, and I think I proved to myself at least mentally that I know I have the capability to get onto the field especially with some more training to start, and to start at both tackles,” Anderson recalled.

He’d have the opportunity to start at left tackle shortly afterward. Prior to the Broncos matchup against the Carolina Panthers in Week 14, Bolles would be forced to miss the game due to illness-like symptoms that the NFL had to treat with caution during the pandemic, which would later be revealed as food poisoning. Anderson received a call from Coach Munchak that morning before the team bus would depart from the stadium.

“You learn pretty quick when you get that call in the NFL when you’re not a solidified starter, you’ve got to be ready to play at any moment," he said. "It’s a different situation when it’s gameday and you get a call the morning of the game from a highly respected offensive line coach that happens to be your coach for your team, and he’s asking you to now step in at a position where you didn’t anticipate that you’d be starting and to help the team win.”

There’s an old saying that rings true: You don’t have to get ready if you stay ready, and that’s what Anderson did. When he received the call from Coach Munchak, he was ready for the opportunity that presented itself to him. “I took it as a challenge, and I talk to Garett [Bolles] about this all the time, but it was actually the most calm that I’ve ever been before any football game I’ve ever played.”

Anderson took the challenge with pride against Carolina, going against a former first-round draft selection in Brian Burns who had six sacks on the season entering the game. The Broncos offensive line only allowed Drew Lock to be sacked once in the Broncos 32-27 victory on the road. Anderson helped set up the Broncos on one of their five scoring drives with a key block on a screen pass that freed up Troy Fumagalli down the left sideline for 29 yards to the one-yard line.

Not only did Denver secure a road victory, but Anderson demonstrated to the Broncos coaching staff that he could play both tackle positions effectively well. As the off-season continues for Denver, Anderson is preparing for the 2021 season by training with Bolles in California and is focused on the things that he can control.

“My goal this year is to prepare myself the absolute best that I can from a training standpoint and also from a position-specific standpoint, playing both tackles, showing the Broncos at any moment when they need me to play left or right tackle, that I’ll be prepared to do so at a high level,” Anderson described.

Maybe with Anderson, the Broncos looming questions at right tackle could be solved internally this season as the NFL free agency period approaches in the coming weeks.