Gary Shapiro sat down with Scott Yates, 9NEWS technology expert, to talk about a new Denver company that's all about stuff. 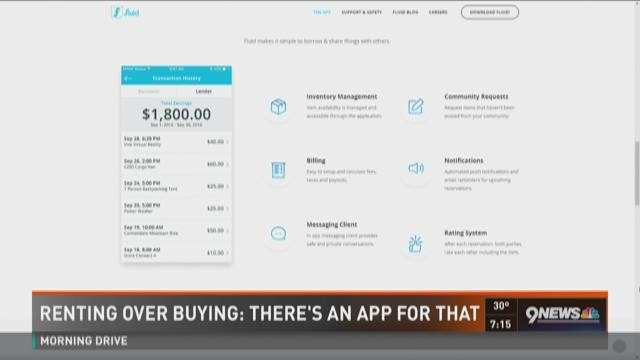 Gary Shapiro sat down with Scott Yates, 9NEWS technology expert, to talk about a new Denver company that's all about stuff.

The stuff in question is the tools, bikes, camping equipment and even cars. A company called Fluid is making it easy for people who want to use the stuff save money by renting the items instead of buying them. And at the same time they make it easy for people to rent their items out. Both sides of the transaction happen, of course, over a smartphone app.

The company also verifies all the people on both sides of the transaction, increasing the level of safety for all involved.

There have been a few companies that have tried to do this and not been able to make it, but Fluid has a couple of new ideas to help make this concept work.

One is that they will actually pay people to be hubs for all the stuff by renting space in a garage or large storage shed. According to the blog on Fluid's site, you can make as $1,000 in four months. This will give a safe, neutral place for people to place and pick up the items. And because all the payment happens through the app, there's no worries about cash being exchanged.

A man who's been to the top of Mt. Everest six times is the first head of a newly created organization that's part of the state government called the Colorado Outdoor Recreation Industry Office.

Luis Benitez is the head of that office, and will be speaking at noon at the Commons on Champa as a part of a series of leadership seminars aimed at startups. His speech comes in conjunction with the SIA Snow Show at the Colorado Convention Center. The speech will be just across the street, so it will probably be very well attended. The event is free, so be sure to get there early to get a seat.

Each Tech Tuesday Scott Yates showcases new and emerging companies that are doing great things in Colorado, along with tech events. This post was written by one of the freelance writers working with the blog writing service BlogMutt, a company Scott founded. Do you want to see your business featured in a future #TechTuesday segment? Build an interesting business and then go to a startup event, and Scott will probably see you there.