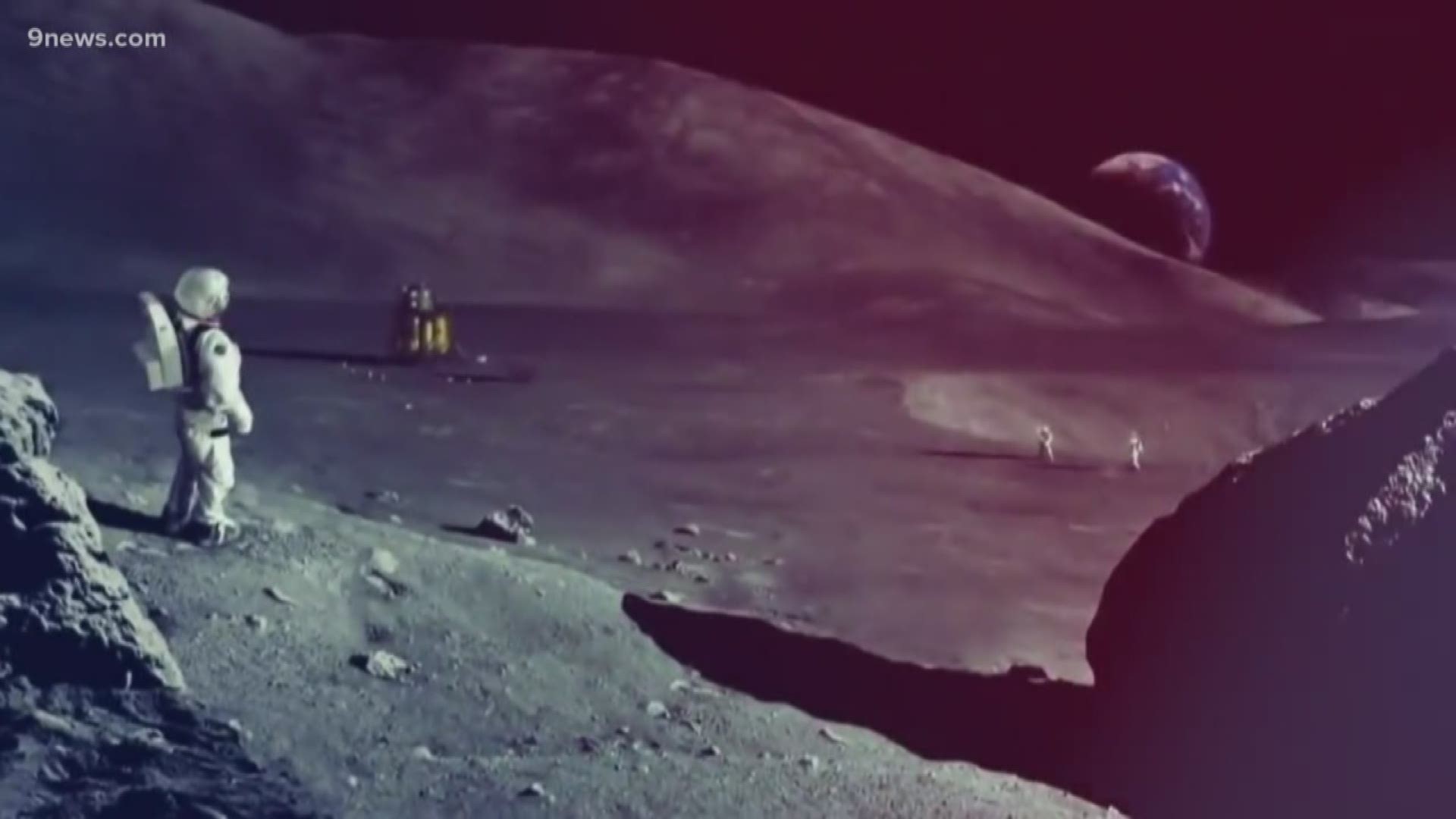 It wasn't just to check out their brand-new aerospace engineering building, but to meet some of the students that will be designing the future of space.

On his tour of the new facility, Bridenstine saw students building drones that can withstand harsh atmospheric conditions. He saw them building miniature space-ready science satellites, and watched them test a virtual reality program designed to train astronauts for space missions.

RELATED: Dream Chaser to launch on ULA made rocket for missions to ISS

His down-to-earth personality connected with the aspiring engineers as he took selfies, wore virtual reality goggles during a demonstration, and was seen fist-bumping students as he moved from room to room.

After his tour his took about 20 minutes to speak to reporters.

9NEWS: What did you tell students about NASA's mission?

Credit: NASA
Artemis is the twin sister of Apollo in Greek Mythology. It is NASA's new program to deliver humans back to the Moon.

What's the importance of a mission named after a woman, and the opportunity for women in today's NASA?

“Fifty years ago we had the Apollo program. In that program, all of our astronauts were fighter pilots and test pilots, and there were no opportunities for women. We now have a very diverse, and highly qualified astronaut corps that includes women. With Artemis, we will take the next man and the first woman to the south pole of the Moon within five years."

Americans have heard this before. The Space Exploration Initiative of 1989, and the Constellation Program of 2005, both of which were cancelled by the next presidential administration. How is Artemis different?

“Go back to the 1990s. The Space Exploration Initiative was going to be funded by cannibalizing the International Space Station. That created a parochial fight where we had Texas, and Alabama, and Florida against that activity. In the early 2000s we had the Vision for Space Exploration. That was going to be funded by cannibalizing the Science Mission Directorate of NASA. Well that creates a different kind of fight in Washington D.C. What NASA has not been good at in the past is retiring the political risk.”

Has Colorado been supportive of NASA?

“The members of Congress and the senators from this state are phenomenal when it comes to space exploration. They are very, very supportive. Cory Gardner was a friend of mine in the House of Representatives. Certainly Michael Bennett has been extremely supportive as well. And Ed Perlmutter a member of Congress, he has been a great friend for a long time. The state of Colorado, in bipartisan fashion, has been very, very supportive of America’s space program."

You mentioned the importance of working with industry partners. How important will that be in the success of the Artemis mission?

“We need to take better advantage of commercial capabilities. This is in the President's Space Policy Directive One. So, how do we buy services instead of NASA purchasing, owning, and operating hardware? Especially in lower Earth orbit?"

“When we talk about human habitation in lower earth orbit, we have the International Space Station, and that is all. It is a finite resource, and people are competing for it because of what can be done in a micro-gravity environment. We’re talking about industrialized biomedicine. We can print human organs in 3D. We are developing new pharmaceuticals that will transform lives here on Earth.”

How does that save NASA money?

“If there is sufficient demand for activity in lower earth orbit on the industrialized side, then NASA, we can step back and be the customer rather than the owner and operator. In other words, we can become the tenant instead of the landlord. When we become the tenant, we save money, and when we save money, we can do things for which there is not yet a commercial marketplace like go to the moon.”

Can you give an example?

“It was just recently announced that United Launch Alliance, which is headquartered right here in Denver, is going to be launching Astrobotic to the moon. This is a NASA initiative to commercially deliver science payloads to the moon. NASA doesn’t own the rocket, we do not own the spacecraft. What we are doing is saying 'hey, we’ve got some scientific instruments we need delivered to the south pole of the moon to characterize the water ice. Who can deliver it?  If you guys can deliver it, we’ll pay you for the delivery.'”

Why do you say we are going to Mars to stay?

“Remember what we’re trying to do. We are trying to go to Mars. Earth and Mars are aligned on the same side of the sun once every 26 months. That means when we go to Mars, we’ve got to be willing to stay for long periods of time using the resources of Mars to live and work”

How does the Moon mission fit in?

“The moon is the proving ground. We are on the same side of the sun all the time. We never leave each other. We can go to the moon, things can go wrong, and we can come back. It’s how we learn to live and work on another world. Apollo 13 taught us very clearly, things can go very wrong on the way to the moon, and you can still make it home. If something like that were to happen on the way to Mars, it would be over”

What's the first step in allowing humans to be able to live and work on the moon?

“The first thing we have to do is use science to characterize the resources that are there. We do know that there’s water ice there. We need to understand how it is embedded in the regolith. Are there maybe even pockets of pure water ice? We found pure water ice on Mars with the Phoenix lander back into 2009. Is there pure water ice on the moon? We don’t know. We need land, and we need to find out.”

Why is water ice so important?

“Interestingly, The discovery of water ice on the moon was made in 2008 and 2009. So, for almost 40 years after we landed on the moon, we thought the moon was bone dry. There’s hundreds of millions of tons of water ice that we know of, it could be a lot more. It's hydrogen and oxygen. Water ice represents air to breathe. It represents water to drink of course, and it's also rocket fuel.”

Will the first missions be tied to mining that ice?

“We are going to be doing robotic precursor missions. We call it CLIPS, the Commercial Lunar Payload Services program. We're going to go the moon to be able to characterize the water ice and then ultimately make assessments as to how can we take advantage of it? How can we utilize it?

What type of science is used?

What do you think of your visit to CU?

What did you think of the aerospace students you met?

“There are amazing scientists, there are amazing engineers. We've talked to a number of undergraduate students today and graduate students. They are getting hands-on experience from day one, because of the partnership between the University of Colorado at Boulder, and NASA, and our industry partners. So, when they graduate, they're not just graduating with chemistry, calculus, and physics, but they are in fact graduating with very real experience. When they come and join NASA later, or our industry partners, they hit the ground ready to go. That's why these relationships are so important, and it's really what is going to make sure the United States of America stays in the lead for the next 50 years.”

And what about the state of Colorado's contribution to aerospace?

Can you name off a few examples of CU Boulder's contribution to space science?

1.  Right now, we've got a robot that's orbiting Bennu, which is an asteroid in deep space. That robot, we call it OSIRIS-REx. It was built right here in Colorado. It's going to go and grab a piece of Bennu and bring it back to Earth. For the first time in human history, we will be doing an asteroid return mission, and that capability was developed right here at LASP, the Laboratory for Atmospheric and Space Research, at the University of Colorado at Boulder.

2. There are instruments that were developed for the New Horizons Mission. The mission that gave us the beautiful images of Pluto back in 2015, the ability to do that spectroscopy. That instrument was developed right here at the University of Colorado at Boulder at LASP.

It is now well beyond Pluto. It flew by an asteroid we call Ultima Thule, and it is still delivering amazing science from four billion miles from Earth.

3. "We're standing in a room where private Industry, university researchers, and NASA, are going to be collaborating on what we need in a lander for the surface of the Moon. For the Artemis program. It very well could be that the first prototype of that lander is built right here in this room.