This is now the driest April through September on record for Colorado's Western Slope. 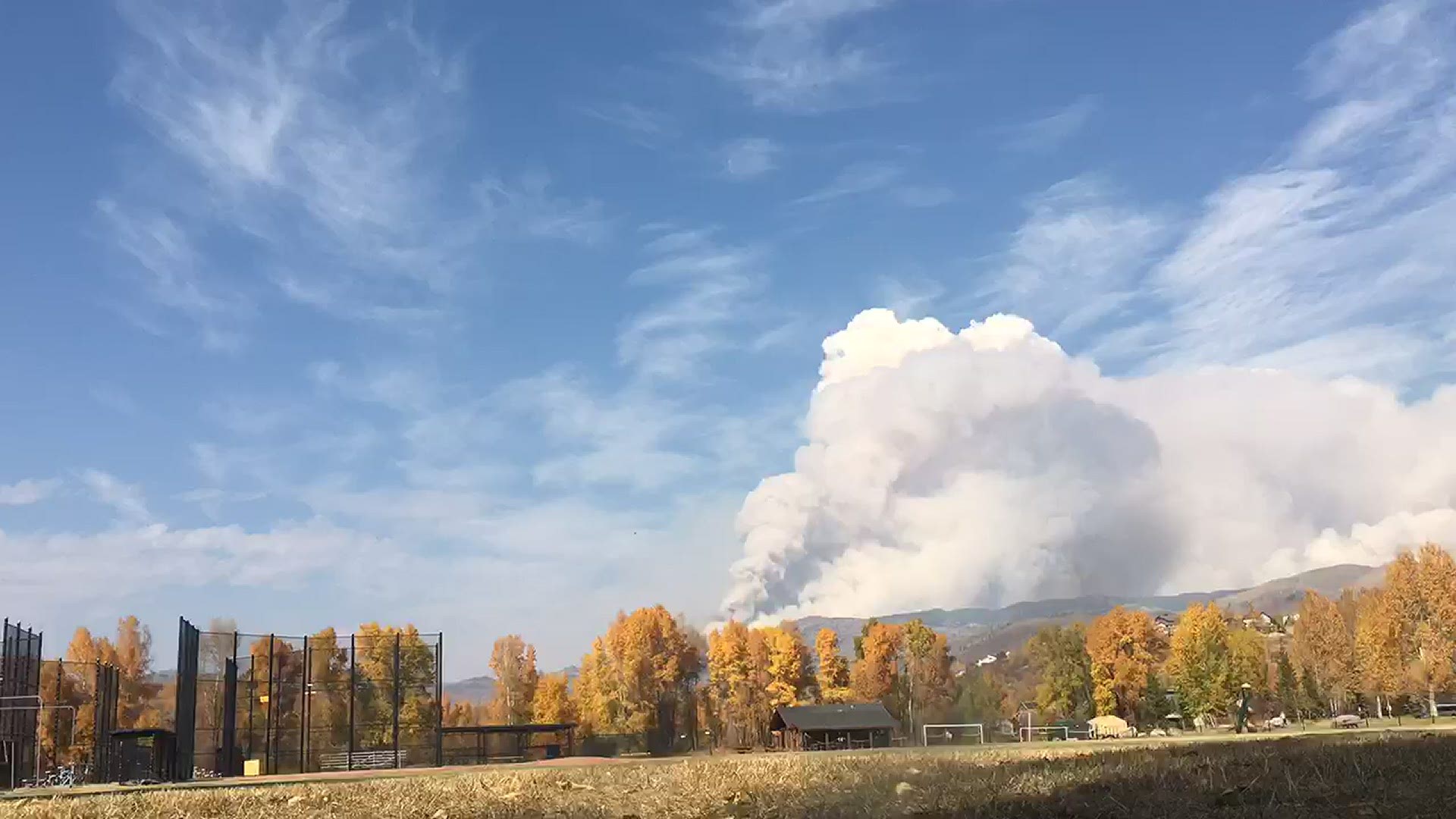 ROUTT COUNTY, Colo. — Just a week ago, Colorado ranchers Matt and Christy Belton drove to the top of a dirt road on the property they manage outside of Steamboat Springs in Routt County. They were trying to get a better look at the Middle Fork fire, which has burned about 20,000 acres since igniting in early September.

It’s windy and the smoke billows into the sky from a ridge of trees. For a moment, flames are visible.

“It’s climbing the ridge real fast, and those fires go uphill better than they climb down,” Matt said. “If we stand here much longer, we’re going to watch it top out.”

In a year of relentless heat and record drought — and destructive wildfires — Colorado’s farmers and ranchers find themselves trying to adapt to life on the front lines of climate change.

“We haven’t had rain,” Matt said. “The wind has been terrible. So the grass, there's nothing really. It's like straw. So we decided to get rid of our calves early.”

The Western Slope has felt the worst conditions, where large swaths of land are now in an exceptional drought — the most severe category of the U.S. Drought Monitor. This is now the driest April through September on record for the area, according to the state climatologist.

> Video above: Time-lapse of the Middle Fork fire.

The Middle Fork fire is burning in the national forest where the Beltons would usually have cattle grazing, but there was time to get their cows and their calves off the land. Matt is optimistic about this fire — it might take a few years, but he hopes the pasture will benefit from the flames. But he’s worried about what might happen in the future.

“We talk about it all of the time, with our cattle up there on the allotment because there’s a lot of fuel there and there’s more to come,” he said. “If a fire were to break out, we’d go lay fence down so cattle don’t butt up to a fence if they’re trying to get out. But if it’s something like that, that’s moving so fast, you don’t go in. Our safety is first.”

Credit: (Michael Elizabeth Sakas/CPR News)
Ranchers Matt and Christy Belton on the land they manage in Routt County, with the Middle Fork fire burning behind them, October 8, 2020.

The Beltons have managed this land for 20 years, and Matt is a fourth-generation Routt County rancher. He said things are different now.

“It doesn't come back like it used to, you know, the grass and stuff,” he said. “At the place that we just bought, we put a bunch of cows on it in the spring when we were done calving before we could go to the forest allotment, and it didn’t come back at all.”

Their hay production was also down by a third. With poor pasture grass and less hay, many ranchers are having to buy it to feed their cattle, which means hay prices are up.

Todd Hagenbuch, an agriculture agent and director with Colorado State University Extension in Routt County, called it a double-whammy.

“One of our ranchers is feeding his cattle [hay] already,” Hagenbuch said. “If you’re feeding your cattle because you’re out of pasture by [early] October, and you’re already down with your [hay] production by 50 percent… I don’t know how you find enough hay in this area to make up for that.”

“There’s not much hay for sale at all here,” Matt said, and added that he never sells his extra hay, although he gets calls all the time for it. Instead, he keeps it for years like this.

Just off the dirt road, there’s a stock pond with a few cows nearby.

“It’s the lowest and driest I’ve ever seen it,” Matt said.

The Beltons are thankful to have options to move their cattle to different water sources, but some ranchers have to truck in water. Hagenbuch said the average snowpack from last winter means springs are doing OK for now.

He said what has made this drought especially unusual is that it came about in the summer, when the monsoon rains usually move in.

“You get regular clouds during the day, you get pretty frequent thunderstorms and not maybe quite so hot because the cause of the clouds are there, but none of that happened this summer,” Schumacher said.

Colorado has had three consecutive summers “with really no monsoon,” Schumacher said, and the last three monsoon seasons have been the worst three on record for western Colorado.

Western Colorado is one of the places to have warmed the most in the United States with climate change. And because the area is already dry, Schumacher said that means there’s less margin for error.

“When you have a monsoon season that doesn't turn out well, and it's 2 degrees hotter than anything that had been experienced previously, it really makes those conditions that much more impactful,” he said.

“We'd be putting legislators on a bus and go into the drought-iest places in the state to see what life is like on the ground. We're not doing that this year, obviously because of COVID, but we still want to be sure that folks are able to tell their story,” Greenberg said.

RELATED: These hay fields may know something we don’t: how to save the Colorado River

So the state has built a website for producers to share their drought experience, but there are only a handful of comments so far. A comment from a rancher in Mancos reads, “I’ve been in the business for a decade and, in my 10 short years, have gotten whiplash from how extreme all of our weather events have become.”

“I think we need to change the semantics and management around drought. Drought tends to carry a notion of impermanence. We are essentially in our third year of drought, which feels more permanent and requires a different mindset and management of our beautiful resources,” the comment continues.

“The bottom line is we've got to really invest in resilience for our agricultural community building resilience up and down the supply chain and making sure we are directing resources in a smart way to support farmers and ranchers in doing what they do best, which is adapting,” Greenberg said.

Rancher Matt Belton agrees that ranchers might have to change the way they do things. But he’s optimistic for what will come next.

“Every day that it's a drought, we're closer to rain or snow,” he said. “It's not good, but it's a good learning experience for everybody in this business and maybe next year will be different. That’s all we can ask for,” Belton said.

RELATED: Extreme drought in Denver for first time since 2013