The Colorado Department of Transportation has been able to make significant strides in big road projects across the state. 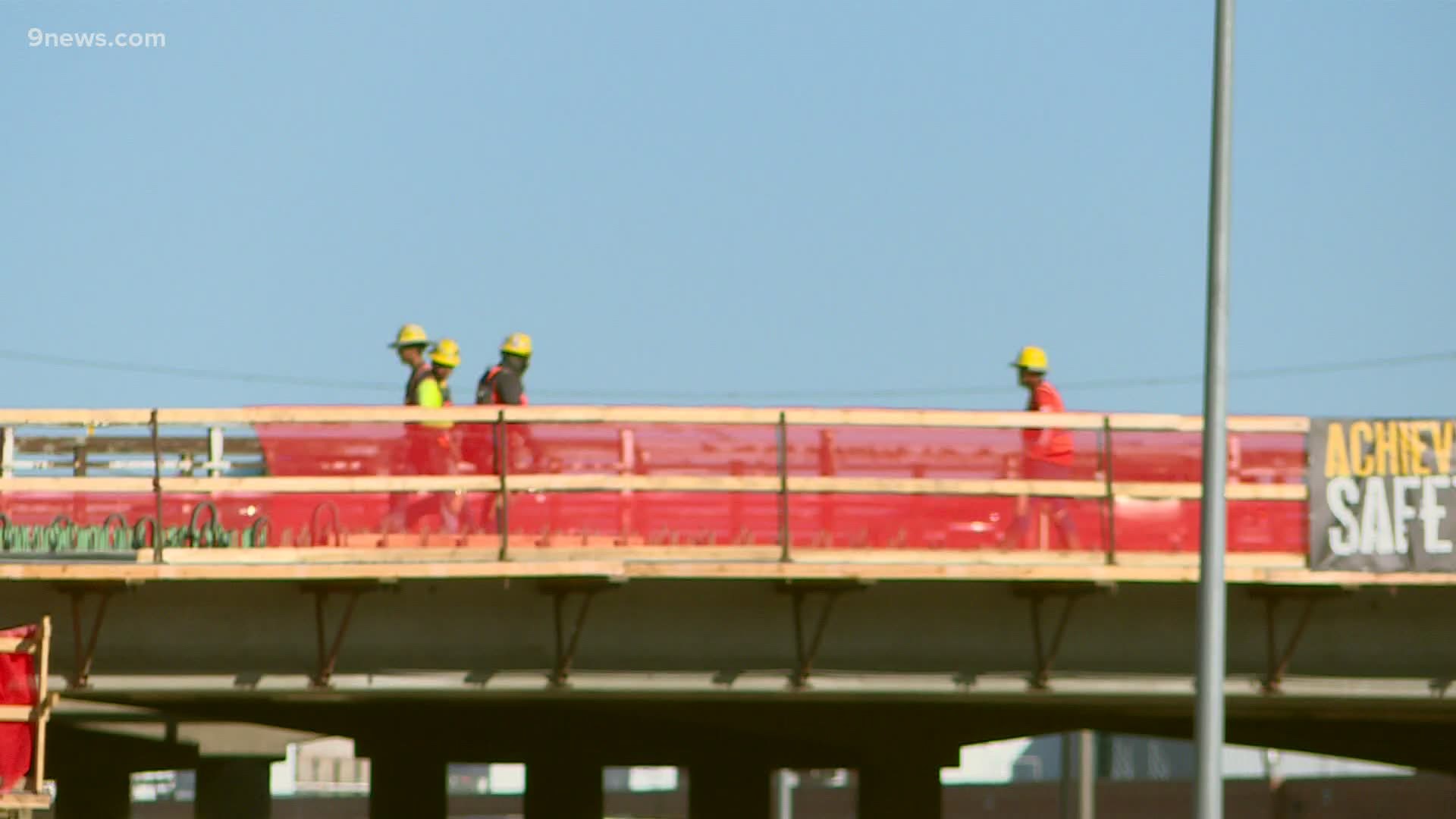 DENVER — Over the past few months, our roads have been quieter than usual. According to the Colorado Department of Transportation (CDOT), traffic volumes were reduced by about 50 percent, which allowed more space and sunlight for the men and women working on big road projects around the state.

It’s too early for CDOT to tell us if any of the work that has been done since March will have a significant impact on timelines.

CDOT tells 9NEWS crews have been able to work faster and safer because low traffic volumes have allowed lane closures during the day.

“This project is anticipated to complete this summer,” Rollison said. “Currently, work continues on various bridges, grading operations, slope work and permanent striping throughout the corridor as well as permanent paving and erecting permanent signage. Trail work continues as crews replace some areas of concrete and complete tie-ins for the underpasses. Once work is completed, the new Express Lanes will open to traffic. Motorists will be able to drive on the new lanes for free during the tolling testing period. Once that is completed, then Express Lane tolling will begin later in the year. Crews have been able to do some daytime lane closures because of low traffic volumes, although traffic is beginning to pick up.”

Crews are no longer doing daytime lane closures in the mainline. There will be closures on ramps and auxiliary lanes with extended times of 7 am to 7 pm.

Daytime lane closures have also been helpful for the I-25 gap project. CDOT said warmer temperatures are more conducive to paving, so when things got chilly over the past few months, it was helpful to be able to work with the sun up.

“This project continues to be on schedule for completion in 2022,” Rollison said. “This includes additional scope that was added for a replacement bridge at County Line Road and a new truck climbing along southbound I-25 between Greenland Road and the Monument weigh station. Construction is being done differently due to COVID-19. We've incorporated new safety protocols in response to COVID-19, including sanitization procedures, the use of masks, social distancing, smaller crew sizes, safe use of equipment, etc. Due to the lower traffic volumes, we have been able to use daytime lane closures for paving operations, traffic shifts and drainage work. Working during the day is safer and more efficient for our crews, which is particularly helpful as they implement these new safety procedures.”

CDOT has noticed that lower traffic volumes have resulted in an increase of speeding through the South Gap corridor. The Colorado State Patrol has increased enforcement both on the ground and by aircraft. Fines are doubled in a construction zone.

As for daytime closures from this point forward, Rollison told 9news CDOT will only close lanes during the day on a case-by-case basis.

Since the end of March, CDOT crews have been able to complete more paving projects and roadway work because of daytime lane closures.

“Since the end of March,” Rollison said, “The Central 70 Project has implemented daytime lane closures on I-70 for paving operations and other roadway work, something we would not do with normal traffic volumes, since we committed to keeping three lanes of traffic open on I-70 during weekday peak hours at the start of the Project. However, in line with other CDOT Projects, we permitted our Contractor to schedule lane closures during the day The Central 70 Project conducted longer term closures on the Steele on-ramp to westbound I-70 and the Brighton Boulevard on-ramp to eastbound I-70 for utility work while traffic volumes on those historically highly traveled ramps were low. Colorado Boulevard between 40th and 48th avenues also experienced some daytime lane closures, with minimal impacts to traffic.”

This pavement rehabilitation project from Federal Boulevard to Pecos Street was officially completed last week 100 days ahead of schedule.

“Due to low traffic volumes,” Rollison said, “Much of this work was done during the daytime as well as night.”

While the major repaving is finished, there will still be some miscellaneous work in the next couple weeks, like grinding, ramp meter loop installs, and re-seeding.

CDOT told 9NEWS they are expecting cuts to their budget, including a two-year suspension of transfers from the General Fund to cover debt service obligations.

“The Transportation Commission will make the final determination on how we will adjust our program,” Rollison said. “It is important to note that we will maintain our safety-critical functions to keep roads and bridges maintained, complete projects that are under construction and address critical priorities for the safety of the travelling public. We have started some smaller projects since mid-March, mainly repaving, ramp metering and safety projects (i.e. Federal Blvd. median project, which will help to improve pedestrian safety). These projects are essential to the safety of our infrastructure.”

RELATED: Some restaurants may be adding a COVID surcharge to your bill